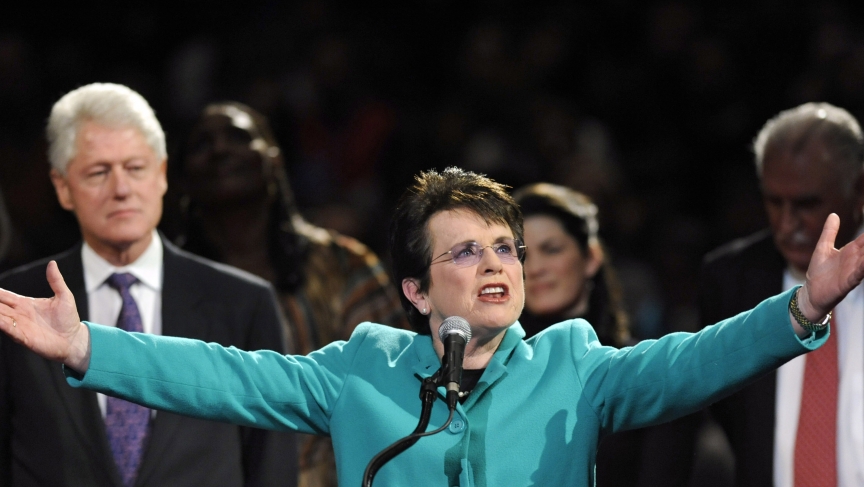 Tennis great Billie Jean King will travel to the Sochi Olympics as part of the official US delegation.

President Obama will not be traveling to the Sochi Olympics, but he's sending a message in his place.

He is sending two openly gay athletes to represent the US at the games. It's a not-very-subtle diplomatic statement against Russia's so-called anti-gay propaganda law.

One of the athletes is tennis great Billie Jean King. She won 39 Grand Slam titles, including six singles victories at Wimbledon. She's famous for smacking Bobby Riggs around the tennis court in a tennis exhibition dubbed, "Battle of the Sexes." And she's an outspoken advocate for sexual equality.

USA Today columnist Christine Brennan wrote that her selection was "a stroke of genius."

What better way to show the nation's disgust for President Vladimir Putin's anti-gay propaganda law than for Obama to send an American cultural icon and sports legend who also happens to be openly gay?

Brennan thinks her presence at the Sochi Olympics is a positive message to the millions of Russians who are gay, have family members who are gay, or friends who are gay.

And that message is simple:

Honored to represent USA in Sochi and I hope these Olympics will be a watershed moment for the universal acceptance of all people.

The other gay athlete in the official US delegation is Caitlin Cahow. Cahow is a two-time Olympic medalist in ice hockey.