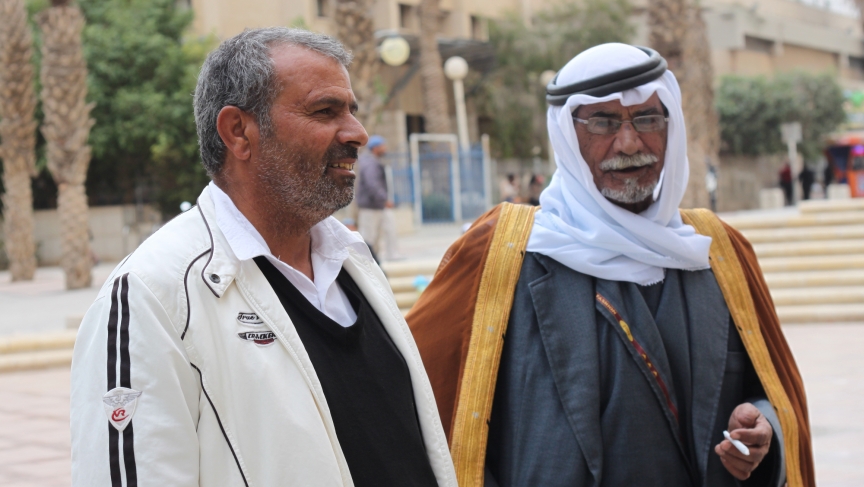 Israel recently gave up a plan to forcibly resettle the country's Bedouin into new communities, but officials would still like them to move away from their impoverished villages.

Israel is proposing to hook up some of the scattered encampments with water and electricity. But others, it wants to demolish, since many of them are so makeshift, they don't even appear on maps.

Umm il Hiran is just such a village that's not on the map. There are no water lines, no electricity hook-ups, no sewage systems, no bus stops — just tin shacks and a few homes with solar panels.

For years, Israel has been vowing to clear out Umm il Hiran. 50-year-old Abdel Rahman Abu Al Giyan is one of the residents there.

“They said to us very simply, you guys have family in Hura, just get up and move to Hura, it's very simple.”

Hura is a Bedouin village nearby that Israel established a couple decades ago with all the modern amenities. Part of the tribe has accepted the government's deal and moved there.

But Abu al Giyan says he shouldn't have to move. “Some in Umm il Hiran have served in the Israeli army,” he says, “and they all want to be treated as equals. Why can't Israel provide them with services and let them stay?”

Ami Tesler is an Israeli official working on the government's plan for the Bedouin. He has gone from one encampment to another, trying to convince Bedouin tribes to pack up and move to smaller plots of land in bigger Bedouin townships, with actual paved streets and pharmacies and schools.

While the government has shelved plans to forcibly resettle the Bedouin, Tesler says it's a good idea that they move. The Bedouin community is the poorest community in Israel, and he tells them the government is really taking their well-being seriously.

“This is a time to turn a leaf. Let's do something for the future, for the kids. Let's go forward! Stop dealing with what happened. We want to go forward! It's very important to us that you be part of Israeli community, part of the economy of us.”

But there is no going forward for now. The Bedouin and their advocates were accusing the Israeli government of ethnic cleansing. The village of Umm Il Hiran, for instance, was slated to be replaced by a Jewish village. From Israel's perspective, the Bedouin are squatting on state lands that the country needs to develop its vast desert with new army bases and new towns.

It's unclear what Israel will do with the Bedouin. And the Bedouin themselves are divided over what they should do. Historically, Bedouin Arabs were nomads who roamed the desert. In recent decades, they've settled down — though many still maintain a traditional lifestyle as farmers and shepherds.

But then there are Bedouin like 23-year-old Rafaffian Abu Al Giyan, who took Israel's offer a few years ago, left Umm Il Hiran and moved up the road to a proper village.

"We are Bedouin," he says. "You know something about the Bedouin? We move around. We get used to new situations.

"When we used to live in tents, and the weather would change, we'd pack up the tent and go somewhere else." That, he said, is what the Bedouin need to do now.