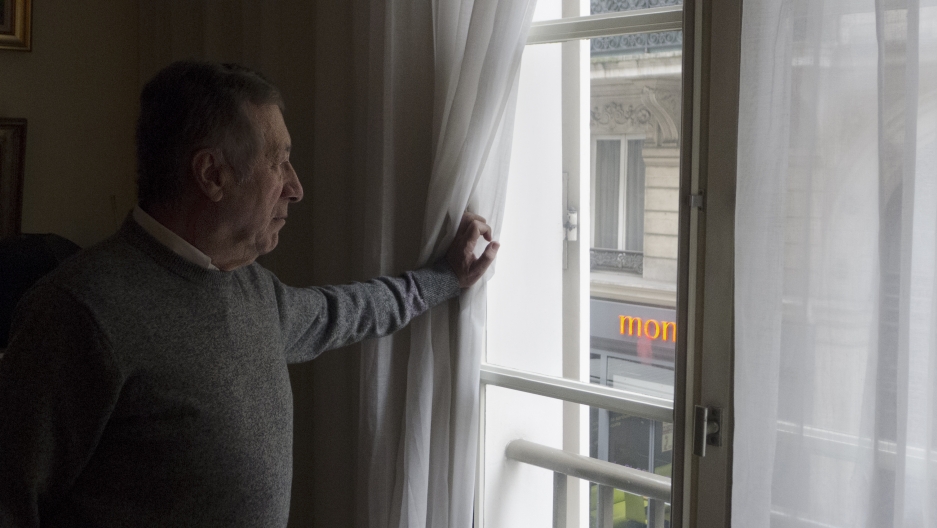 Paris resident and anti-noise activist Gerard Simonet peers through his double-paned windows to the street below. His ears are on constant alert for nocturnal revelers and honking horns.

Big cities across Europe have been cracking down on noise in recent years. You know, raucous bars and thumping clubs. But Paris has been out in front, led by citizens groups, shutting down the loudest locales.

On a recent weeknight, I visited one small but hopping bar in Paris. At close to closing time — 2 a.m. — a young woman, beer in hand, walked over to my table and started singing.

Two verses in, the bar’s owner walked past and wagged a finger. The girl, named Marie Monchant, sat down. I asked what she thought about being shushed like that. This was her message for the French “fuddy duddies” who would limit her fun.

“They should install double-paned windows,” she quipped. “That’ll keep the sound out.”

Actually, one local resident, Gerard Simonet, has fancy double-paned windows. But no, he he told me, they don't keep the din of late night revelry out. Simonet runs a citizens group determined to see noisy bars shuttered.

“There are probably people who don’t love me,” he laughed.

Which may be an understatement. But Simonet couldn’t care less. He just wants to sleep well.

“It’s terrible in the night,” he said. “You just feel the boom-boom. You don’t hear the music, you just feel in your own body.”

When that happens, he said, he takes action. That is, he calls the police.

Lots of big cities around the world fight nighttime noise, with curfews or fines. In New York, there’s even a hotline you can call: 311. But Paris’s policy is among the most drastic. If there are enough complaints, city officials can close a noisy bar — for a weekend, or half a year — with no trial and no appeals.

Simonet insisted his crusade isn’t against fun. His beef is with loud noise, of any sort.

He took me on a tour of his noisy downtown neighborhood, La Marais. Cars stuck in traffic were honking like crazy.

“How does all the honking make you feel?” I asked.

“The honking? What is that?”

“I completely disagree,” Simonet said. “I don’t like it. I think the government in all countries should take the decision to stop with it. We don’t need to have this.”

“Yes,” he said, shaking his head, “but safety works once in a million of cases, you know. Most of the time they honk when, they, you know...“

Just then another loud honk cut Simonet off in mid-sentence.

“Knock it off!” he shouted, approaching the driver who’d just honked. “You’re not helping!” he said, waving his hands. “We live here. We’ve got that sound inside our heads all day long!”

The driver of the car looked slightly chastened, but would go on to honk more.

Simonet’s campaign against nocturnal noise has led the city to close some bars, but he likely won’t see an end to the "beep beep" anytime soon. In the meantime, his critics have a suggestion for him if he can’t stand the big, noisy city: Move to the countryside.