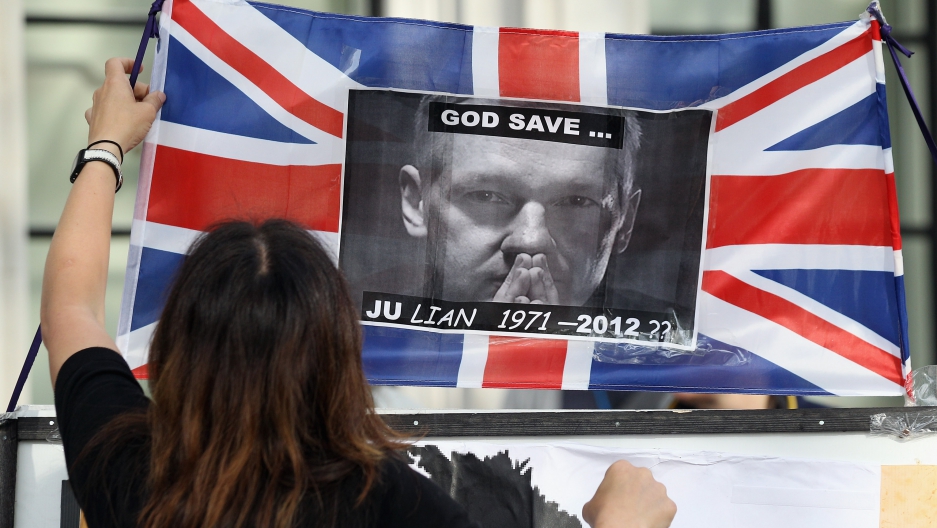 What do Calle 13 (the Grammy-winning Puerto Rican rap group), Julian Assange (WikiLeaks founder), Tom Morello (Rage Against the Machine guitarist) and Kamilya Jubran (Arab-Israeli singer) have in common? “Multi_Viral,” a modern protest song about media manipulation, youth activism and the need for pacifism.

The idea behind “Multi_Viral” began this June when Calle 13 frontman Residente visited the Ecuadorean Embassy in London, where Assange is living as an asylee. Through Twitcam, a live streaming video program, the two announced a joint project and invited fans to participate in a live songwriting session. Lyrics were partly sourced via Twitter, as thousands of people shared ideas and social justice concerns.

The result is a global collaboration, with shout outs to recent protest movements around the world, including 15-M in Spain, the Arab Spring, the Occupy Movement and Mexico’s #YoSoy132.

The video was filmed in the West Bank in Bethlehem and in Beit Sahour, a Palestinian village, NPR reported.

The location and subject are a nod to the Palestinian cause to which many Latin Americans themselves are sympathetic. Many of the region’s governments officially recognize the “State of Palestine.”

The song is sung mostly in Spanish but also includes French, Arabic, and an unmistakable Assange in English.

You will not hear the WikiLeaks anti-secrecy activist rap per se — but he does offer a sort of spoken word. His verse starts at minute 2:48, saying, “From Cairo to Quito a new world is forming, the power of people armed with the truth ....”

And here’s a translated excerpt of Calle 13’s Spanish rap:

And they can’t stop us
because our message is deep
converting any lieutenant into a shark with no teeth.

If the press doesn’t speak
we give the details
spray-painting the walls on the street
I raise my banner and pass it along
if only one person reads it
we’re already changing the world.