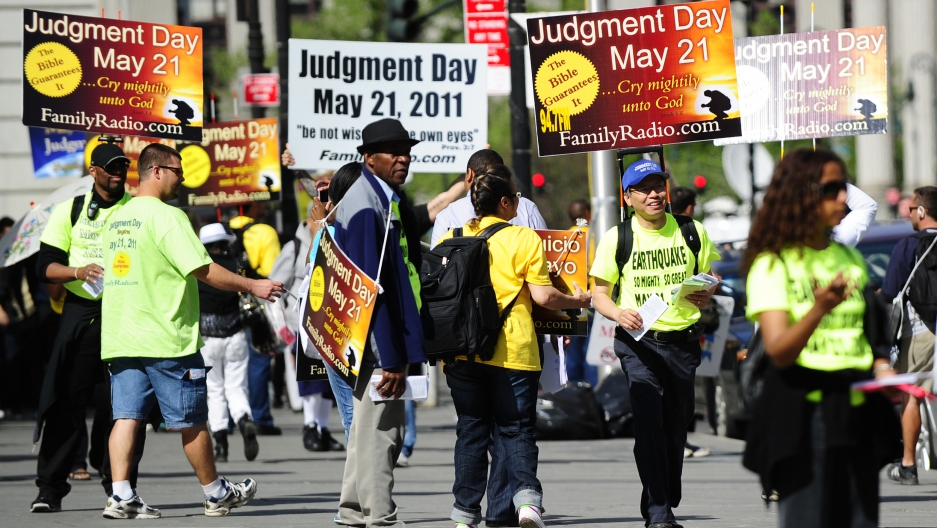 10. The Rapture (May 21, 2011): Activists who believed that 'Judgement Day' would occur on May 21, 2011, spread their word near Manhattan City hall in New York on May 12, 2011. Minister and evangelical broadcaster based in California Harold Camping, 89, predicted the end of the world, pointing to mathematical clues in the Bible as the source of his prediction and had his many followers and some 2,000 billboards announcing the event. On May 21, according to Camping, all true Christians should have been taken to heaven while those left behind suffered through cataclysms until the end of the universe, predicted to be October 21, 2011.
Credit: Emmanuel Dunand
Share

Harold Camping, a Christian radio preacher who predicted the end of world would occur in 2011, died on Dec. 15 at the age of 92, his Oakland, Calif.-based broadcasting company confirmed Tuesday.

Camping attracted mainstream media attention by spending tens of millions of dollars on thousand of billboards and millions of pamphlets, translated into 61 languages, that urged people to get right with God before Armageddon arrived on May 21, 2011.

The radio show host and former civil engineer said he’d determined the date through complex mathematical calculations and “clues sprinkled throughout the Bible.”

Camping calculated the exact date of doomsday at least 12 times starting in 1978, and simply re-crunched the numbers each time he was wrong.

“It is going to happen,” Camping told NPR in early May 2011, according to the Washington Post. “There is no Plan B.”

When the world didn’t end on May 21, his followers, some of whom had quit their jobs because the end was nigh, were sorely disappointed.

Camping tried one more time, announcing that Judgment Day would instead occur on Oct. 21, 2011.

After the sun rose on Oct. 22, the evangelist retired from the prediction business.