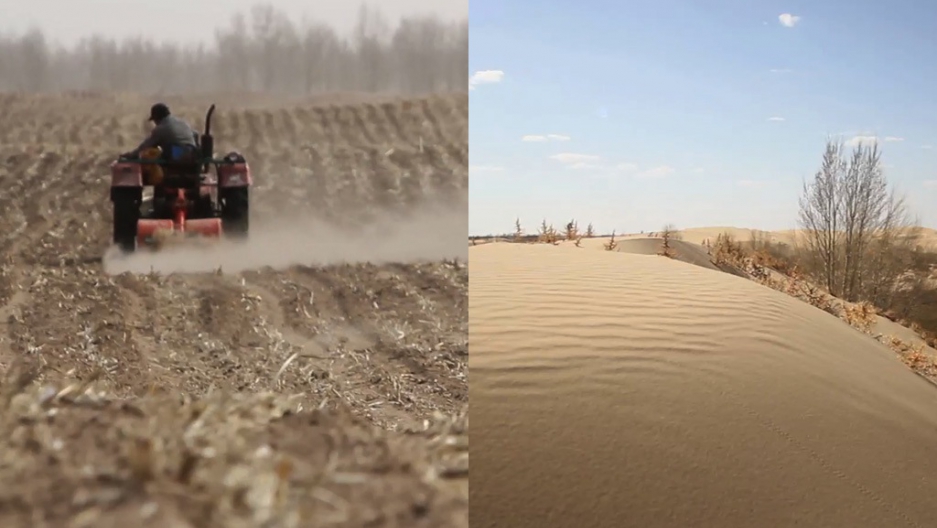 In Inner Mongolia, the desert has expanded by hundreds of miles in recent decades, in part due to climate change. Chinese farmers — pictured here in Kulun Qi, near Naiman, Inner Mongolia, about 400 miles from Beijing — are watching their fields turn to desert.
Credit: Jonah M. Kessel
Share

NAIMAN QI, INNER MONGOLIA, China — Over the last three years, San Qinghai has had to dig four new wells, each one deeper than the last.

Squinting and wearing a ragged gray sweater, San pointed to several acres of dry, brittle corn behind his house. He said he lost a third of his crop this year.

"The winters have been getting colder, and there hasn't been much rain," he said. "I'm worried that the sandstorms will destroy my crops. It's been getting worse."

Long days in the dry air and punishing sun have left deep creases in his leathery skin, making him look older than his age. After gazing at the field, he tosses a few dry husks into a horse’s feed trough and plods back home on the village’s narrow lanes. The streets are soft and thick with sand.

Life has never been easy here on the edge of the Gobi Desert, 400 miles northeast of Beijing. The soil is sandy and lacks the fertile loess that allowed agriculture to flourish in China’s dry north. For centuries, Mongol herdsman roamed these steppes, grazing their flocks on low, scrubby grasses native to the area.

In the mid-20th century, excessive farming began to erode the land. By 2005, 300,000 acres of what used to be rolling grassland here in Naiman was desert.

Now, the primary threat to San and thousands of farmers like him is climate change, according to Wang Shaokun, a researcher who studies desertification in Inner Mongolia. With declining rainfall and falling water tables, the land is in danger of becoming uninhabitable if trends continue.

"Our biggest concern today is not man-made problems, it is climate change and water resources," said Wang.

If the water situation continues to worsen, they may need to abandon their pastures and move into cities like Naiman or Tongliao. Leaving the land would be a sad fate for Mongolians like San, who have lived here since the invasion of Genghis Khan.

Already, 178,000 people have been forced to relocate from the grasslands near Beijing as part of officials’ anti-desertification efforts, according to state media reports.

“Land desertification is the most important ecological problem in China," said Zhang Yongli, deputy director of the State Forestry Administration, at a press conference earlier this year. “It causes erosion to the available space for people's existence and development, provokes natural disasters like sandstorms, and endangers agricultural production by degrading the land.”

For decades, researchers have battled desertification in this part of Inner Mongolia, which sends sandstorms blasting into Beijing every spring. Scientists first came in the 1960s to tame sand dunes that had spread because of excessive farming and grazing.

In the 1980s institutes like the Naiman Semi-Arid Research Center were founded to develop methods to help bring back the grasslands. They planted trees such as poplars and aspen pines, and enclosed fields to encourage the growth of native grasses.

When it came to slowing local causes of desertification, their efforts were largely successful. From 1985 to 2005, the amount of degraded land in Naiman decreased from 733 square miles to 463 square miles (an area about the size of New York City’s five boroughs).

But now climate change is bringing drier, hotter weather, threatening to undo all their work.

Since the turn of the century, average rainfall has decreased 10 percent in this part of Inner Mongolia, according to the Naiman research center. The average temperature has risen by about 1 degree Fahrenheit.

As a result, millions of trees planted by the government as a “Green Belt” to protect Beijing from sandstorms have died.

"Around here, many lakes have also disappeared,” said Zhao Xueyong, director of the center. “This is due to the decline of rainfall and the variability of climate change."

The grasslands that covered Naiman in the 19th century have given way to a sandy landscape that the locals call the Horqin. It lies to the southeast of the Gobi desert, but in many places the two geographic features have become indistinguishable. The desertified Horqin covers an area more than twice the size of New Jersey and is spreading rapidly.

Driving around the area, you can see desertification’s effects firsthand.

To the north, rolling sand dunes have blown onto construction sites, covering backhoes until they can be cleared away. On the eastern side of Naiman town, the government has posted signs directing drivers to a “Desert Tourism Area,” where soft, huge dunes spread for miles. Locals race cars, motorcycles, and horses across the desert.

You can also see the government’s efforts to combat it. Young saplings line either side of a new six lane road named "Ecological Avenue." Colorful propaganda billboards exhort farmers to save water, conserve the environment, and refrain from chopping trees. A policy lets farmers receive thousands of yuan a year if they convert their water-intensive cropland to grasslands or forest. But there’s only so much they can do when water supplies are dwindling.

In the village of Yaole Dianzi, where officials have proudly deployed anti-desertification techniques since the 1980s, the local chiefs now have to worry about disappearing groundwater. Deputy Township Secretary Comrade You, who was wearing stylish black glasses and a fake-leather satchel, illustrated the dilemma by pointing to the town’s name: the original Mongolian name of Yaole Dianzi means "water coming out of the ground," he said.

"Now, you will never see that happening.”

Comrade You explained that the government had restricted the number of wells farmers could dig as a stopgap measure. When asked how many wells were permitted, he demurred. “We make decisions based on the big picture. Land that already has a working well cannot build another."

The village boss, Comrade Yan, has stained teeth and a tatty jacket that give him a scruffy charm. He said that despite the worrisome change in the climate, he remained optimistic about his town’s future.

"I believe in cycles," he said, alluding to a traditional Chinese belief that good and bad fortune come in 60 year cycles. "There was a terrible dry period in the 1950s. So I think there will be a couple years of rain coming."

If the rains don’t come, towns like Yaole Dianzi could vanish. Farmers who depend entirely on the aquifers to tend their crops would be uprooted and forced to find another home.

In other parts of Inner Mongolia, the government seems to be exacerbating the water crisis.

“The priority for the local government is to develop the economy, the GDP,” he said. “In fact, the policy itself is a cause of the desertification. They are encouraging the development of coal mining there, which has a huge effect on the water resources.”

Coal plants need huge quantities of water to produce steam for turning turbines. In western Inner Mongolia, Sun said, groundwater used to be a foot and a half below the surface; now it is about 330 feet down.

Critics also note that planting too many trees, particularly poplars, contributes to the depletion of groundwater. Nevertheless, China continues to pump funds into such projects. In August, the Chinese government announced a plan to plant more than 2,000 square miles of pine forest in Horqin by 2020.

“I feel that’s crazy,” said Sun Qingwei. Instead of addressing the underlying cause — deteriorated land and depleted aquifers — the policy simply adds more trees to an already strained ecosystem. “There is a natural balance. Land degradation does not happen because there is not enough vegetation. If you just plant trees, you are making the situation worse. This is very commonly practiced. They call it anti-desertification, but in my opinion it is totally wrong.”

That’s not counting the NGOs that are also getting involved.

The Million Tree Project, an initiative of the Shanghai branch of Jane Goodall’s Roots and Shoots network, has already planted more than 1.4 million trees in Tongliao. The project’s Inner Mongolia coordinator, Wang Kai, 27, says they now maintain 23 separate forests covering 2300 acres. He acknowledged that scientists believe that planting trees could be depleting groundwater, worsening desertification in the long run.

But in the end, with rainfall decreasing and temperatures rising, there may be nothing people can do to completely arrest the degradation of the land in northern China.

"It seems stable from the outside,” says Wang. “But the underground water problem is like a time bomb. When it goes off, everything will be chaos."

This article was edited by David Case @DCaseGP.