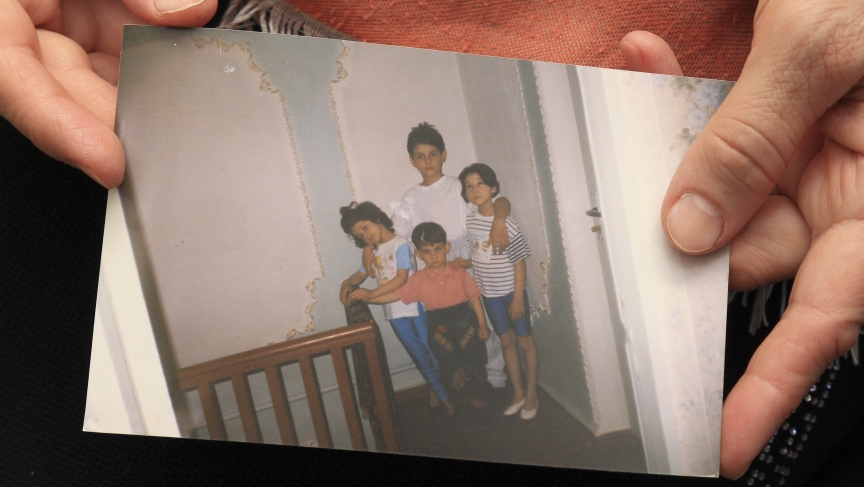 Patimat Suleimanova, aunt of Boston bombing suspects Dzhokhar and Tamerlan Tsarnaev, holds a photo from the family archive at her house in Makhachkala April 22, 2013. Dzhokhar (C, bottom) and Tamerlan (C, top) Tsarnaev, accompanied by their sisters.

"The fall of the house of Tsarnaev."

That's the title of the Boston Globe's investigative report into the history of the two brothers accused of planting the deadly Boston marathon bombs. And it uncovers new details about their deeply dsyfunctional family.

Tamerlan Tsarnaev died in a shoot-out with police. Dzhokhar Tsarnaev is facing charges of using weapons of mass destruction to kill three and injure some 260 others. He is also charged in the murder of police officer Sean Collier.

Boston Globe reporter Sally Jacobs focused her research on the older brother, Tamerlan Tsarnaev, and reports that he suffered from mental health issues.

Tamerlan Tsarnaev first heard voices in his head when he was a young man, said Jacobs. "He described them as telling him to do things that he didn't want to do. He was clearly worried, afraid of what the voice was saying."

Investigators have suspected that Tamerlan was motivated, if not deliberately directed, by jihadist revolutionaries. But the investigation by the Boston Globe suggests that Tamerlan was mainly suffering from mental health issues.

The Globe also investigated Tamerlan's younger brother Dzhokhar — who was known by his nickname Jahar.

"I think the public perception of Jahar was that he was this captain of the wrestling team in high school, an honors students, he got a scholarship — he was this great, wholesome kid. And then, suddenly, almost overnight, he becomes a bomber," said the Globe's Patricia Wen. "And my goal was to try to connect the dots in between, if I could."

And to connect the dots, Wen focussed on his transition from high school to college.

"When I spoke to people who knew him in college, I began to see how he became quite destablized when he got to UMass-Dartmouth," said Wen. "He became quite a thrill seeker." And that thrill-seeking included illegal activities.

"He started to become a major, high-volume, pot dealer," said Wen. According to friends, the pot-selling business grew quickly until he was earning about $1,000 a week, and often more.

These friends also said Jahar sometimes carried a gun when packaging his weed.

"It does not ring true to me that Jahar was this docile, meek brother who was told by his brother to go set some bombs," said Wen. "Do I think Jahar would have chosen to set bombs and use jihadi language on his own? No. I think Tamerlan provided the ideological template."

But Jahar was failing academically and was likely to be kicked out of college. At the same time, Tamerlan was struggling to make ends meet and was soon to be evicted from his home.

Reporter Sally Jacobs says it was a perfect storm. "Just as Jahar had lost everything, in many ways, so had Tamerlan," said Jacobs. "They aligned together out of desperation."

Around this time, prosecutors say, Jahar downloaded onto his laptop several radical Muslim publications that focused on Islamic jihad. He also allegedly downloaded instructions on how to make a pressure-cooker bomb.