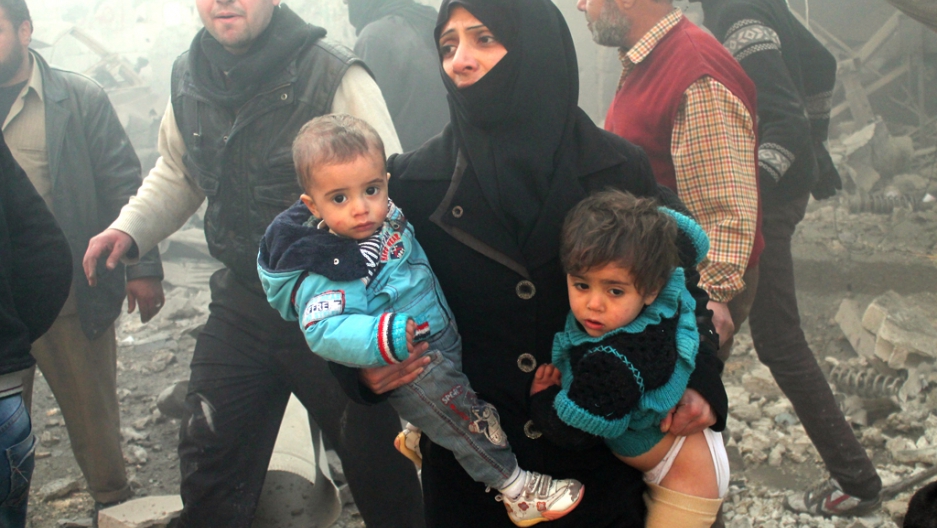 A Syrian woman carries children following airstrikes on a rebel area of the war-torn northern city of Aleppo on December 15, 2013.
Credit: AFP
Share

The United Nations launched an appeal Monday for a record $6.5 billion to help 16 million Syrians — including those in the war-torn country and those seeking refuge in its Middle Eastern neighbors.

The appeal, which would cover food, water, shelter and health services, is the largest the UN has asked for a single crisis.

Around $2.3 billion of the aid for 2014 would go to civilians in Syria, and $4.2 billion would go to refugees in the region — in Turkey, Lebanon, Jordan, Iraq and Egypt.

Valerie Amos, the UN's emergency relief coordinator, said the appeal was part of the UN's $12.9 billion appeal to fund humanitarian operations for 52 million people in 17 countries over the next year.

Amos called the Syrian conflict "one of the biggest crises in modern times," and said refugees "think the world has forgotten about them."

The appeal came as the UN's humanitarian agency (OCHA) estimated that the number of Syrian refugees would double over the next year, beyond 4 million.

The agency also estimated the number of Syrians in need of aid within Syria would increase to 9.3 million.

The conflict, which entered its 33rd month, has killed more than 126,000 people and displaced millions.

The Amnesty report said only 10 European Union members had offered protection or residency to fleeing Syrians. The number of spots offered across the region totaled 12,340, with 18 member states offering no places at all.