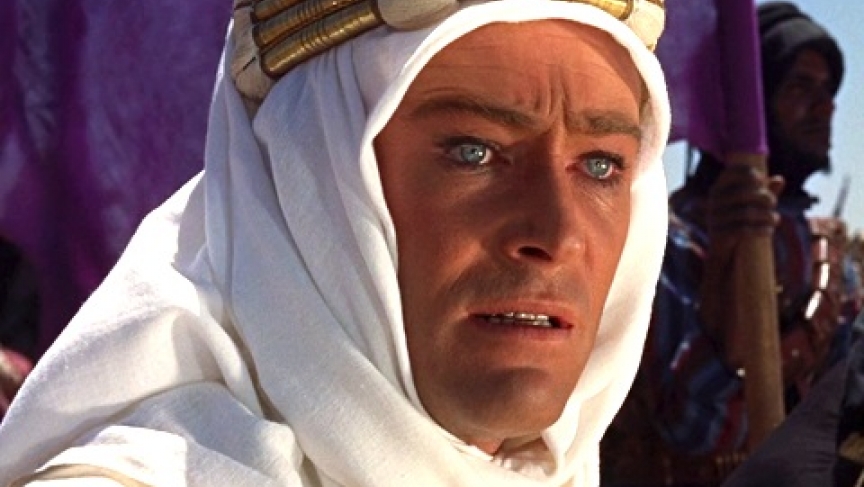 Peter O'Toole as Lawrence of Arabia

Lawrence of Arabia is a bio-pic that tells the story of a young British intelligence officer in World War I. T.E. Lawrence is the officer who inspires and leads a revolt among the Arabs against the Ottoman Turks, who at that time ruled much of the Middle East. The Turks made the mistake of siding with the Germans against Brits.

Lawrence was one of the few men portrayed as an old-school hero after the war — a single man who helped change the course of the war through his talents, courage and will.  The movie certainly plays to that image, but also hints at the psychological cost.

Lawrence's story and his role in the Arab Revolt — and the way it's all portrayed in the movie — is a historical minefield. It has created violent debate among scholars and lawsuits by families of some of those portrayed. Much is open to interpretation, so this is my take on the story.

Let's start with the sand. Director David Lean worried that the rocky scrub of the Jordanian desert — where much of the movie was filmed — was not sandy enough for Hollywood audiences. He thought the brown scrub of the actual desert was not yellow enough and had too much vegetation. So Lean used time and again those few spots of golden sand dunes.

Lawrence's Arab troops are portrayed in the movie as undisciplined Bedouin tribesmen. In fact, many were uniformed and disciplined, including thousands recruited from among ethnic Arabs being held in British prisoner-of-war camps. They'd been captured while serving in the Turkish army earlier in the war, and volunteered to fight in this Arab revolt.

Another hotly debated issue is the significance of Lawrence's role itself. He was only one of several successful British and French intelligence officers operating in Arabia. Some say Lawrence came to undue prominence because he wrote a huge, and somewhat self-aggrandizing memoir, the "Seven Pillars of Wisdom."

He also got exposure from a US journalist, Lowell Thomas. Some say the real Lawrence was a successful media manipulator, who tried to appear self-effacing. Thomas himself said Lawrence "had a great way of backing into the limelight." Some scholars say Lawrence's prominence was well-deserved, while others say the hero-worship of Lawrence obscures the achievements of the Arabs themselves, especially Faisal.

Lawrence of Arabia is one of very few movies that does not have a single woman credited with a speaking role. This is ironic since the British orientalist, Gertrude Bell, was a friend of Lawrence, and played a key role with him in British intelligence in Cairo. In fact, it was Gertrude Bell who briefed Lawrence on the composition of the tribes around the key Red Sea port of Aqaba, and how to win them over. During her visit, she had a meeting with the powerful Howeitat tribe. Their assistance proved vital to Lawrence and Faisal's attack. She remains one of few British officials of the time remembered with affection in the Middle East.

However, overall the movie is faithful to the one key primary source, Lawrence's own memoir. It captures the spirit of the times. Most of the characters are historical, or composites. And a lot of the little scenes are accurate, like the scene where a British medical officer enters an Arab hospital and denounces Arabs as savages and slaps Lawrence, who's dressed as an Arab. That's lifted straight from "Seven Pillars of Wisdom."

Another striking scene is when a sole Arab warrior called Talal, draws his sword and charges alone at a Turkish column after discovering atrocities in his home village. That's another true story, and so is the subsequent massacre of the 1,500 Turkish troops and Lawrence's famous shout of "No prisoners!"

As a bonus, Peter O'Toole does look superficially like Lawrence, although the actor is a lot taller. And the movie certainly captures the man's delusions of grandeur and troubled soul. More surprisingly, Alec Guinness was a dead-ringer for Faisal, and was in fact mistaken for him on the streets of Jordan by those who knew the Arabian nobleman.

The movie, to my mind, also captures the British duplicity of the time. The Brits did promise a great kingdom to Faisal and his family, comprising what's now Saudi Arabia, Jordan, Israel-Palestine, Syria and Iraq. However, they also promised Palestine to the Zionists, and Jerusalem to the Russians, and Syria to the French — pretty much agreeing to whatever anyone wanted in return for their help in the war. Lawrence was part of this and knew about much of it. And he did not resign in protest, as suggested in the movie.

Overall, the movie is more fact than fiction. It's well-researched. But it is controversial among Lawrence afficionadoes. But then, so much of his life was controversial.