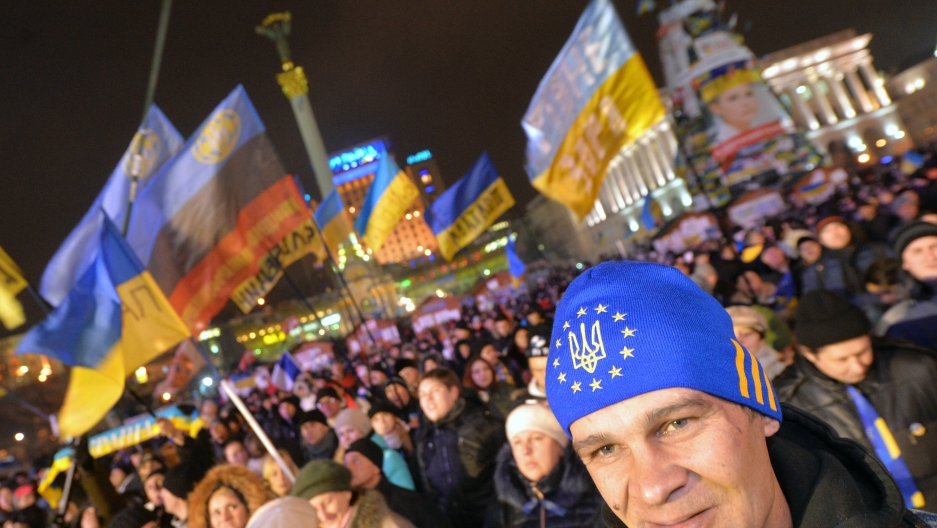 KYIV, Ukraine — Revolutions are always messy business, but the situation in Ukraine — now entering its fourth week of political crisis amid massive street demonstrations — may best be described as a quagmire.

As President Viktor Yanukovych’s administration continues to fend off demands by opposition leaders that he fire his government and hold fresh parliamentary and presidential elections, the dynamics of the protracted stalemate have steadily come into focus.

They include a lack of clear opposition leadership, growing anger among ordinary protesters, a stubborn regime and a deep cultural divide. As pressure mounts on both sides of the political elite, the prospects for a solution remain dimmer than ever.

“This isn’t like the Orange Revolution, which was ultimately all about an election,” says Andrew Wilson, a Ukraine expert at the European Council on Foreign Relations, of the last mass protests in 2004. “The endgame here is less clear.”

It didn’t take long for the protests that erupted last month over European integration to expand into other issues.

While a severe police crackdown on protesters helped consolidate public rage against Yanukovych and his government, activists say demands for a sweeping change of power have existed since the demonstrations first broke out.

They’ve been fueled by the creeping authoritarianism and rampant corruption critics say have flourished since Yanukovych’s election in 2010.

“This was the breaking point because people had tolerated him for so long — the lawlessness, the corruption, and everything else,” said Oleksandr Danylyuk, a civic activist and an early organizer of the demonstrations.

Unlike the Orange Revolution, which was led by a consolidated opposition force, he adds, this uprising isn’t about leaders.

“Most people here didn’t come out for one leader or another,” he said in an interview. “This isn’t 2004, and the authorities should realize that.”

That’s presenting a problem for the country’s three main opposition parties, whose leaders have been thrust to the forefront of the largely unexpected protests.

While they’ve attempted to maintain a united front, some experts suggest the coalition — which includes a boxing champion, a fiery nationalist and a bookish economist, none of whom enjoy overwhelming popularity — is shakier than it seems.

“There are some definite political and psychological contradictions, especially in the process of making decisions,” said Volodymyr Fesenko, a political analyst in Kyiv.

But decision-making may be a moot point in an uprising where popular demands to oust the entire ruling elite have so far proven too great for opposition leaders to meet.

Their failure to force a no-confidence vote in the government earlier this month has left few other political avenues open. Now they face a long winter without any major elections through which to challenge the regime.

Yanukovych, still the democratically elected president, is set to remain in office until early 2015.

That’s emboldening some government allies, such as Vadym Kolesnichenko, a lawmaker from the ruling Party of Regions, who blames opposition leaders of preparing a “coup.”

“You wanted to oust the government? You had a parliamentary minority and the vote didn’t pass,” he said.

“Why else do we have laws, the parliament and deputies?”

More challenging perhaps is the bitter geopolitical divide that has plagued Ukraine for years, in which the Ukrainian-speaking central and western regions generally look toward Europe, while the largely Russian-speaking eastern and southern regions prefer closer links with Moscow.

That distinction became clearer last weekend, when protesters from both sides of the divide held dueling rallies only several hundred feet apart.

While the pro-government rally was dwarfed by the demonstrations on Independence Square — and marred by reports that most protesters were paid and bused in from the regions — it nevertheless served as a reminder that far from all Ukrainians agree with the pro-Europe movement.

That’s especially the case among the factories of eastern Ukraine and seaports along the Black Sea coast, where many workers say they help keep the country’s economy humming.

Kolesnichenko, who is based in Crimea, sums up the perception by his constituency of the anti-government protesters: “They’re having fun while we’re working.”

“It’s very unsettling for them,” he told GlobalPost by phone. “It’s like spitting at everyone who lives in southern and eastern Ukraine.”

Yanukovych has offered some concessions to the demonstrators who have flooded into his capital’s center for weeks.

He’s proposed amnesty for jailed protesters and even launched investigations into top officials who allegedly ordered the violent November 30 assault on mostly sleeping students on Independence Square, the heart of the protests.

On Monday, local media reports quoting unnamed sources suggested he would fire several more ministers over their failure to predict the financial devastation he claims the EU agreements he refused to sign last month would have wrought.

Many say that’s beside the point.

Yanukovych’s scheduled trip to Moscow on Tuesday to hammer out agreements may be aimed at helping patch up Ukraine’s creaky economy appears to have negated any concessions the embattled president has made.

Despite reassurances from Ukrainian officials to the contrary, opposition leaders fear Yanukovych may take his first steps toward signing up the post-Soviet republic to a Moscow-led customs union, an alternative the Kremlin has aggressively pursued in recent months.

Those fears were probably inflamed by an announcement on Sunday from EU enlargement chief Stefan Fule that talks between Brussels and Kyiv on the agreements are “on hold” until Ukrainian authorities show a clearer commitment.

Other EU officials appeared to suggest Fule may have spoken too soon. Swedish Foreign Minister Carl Bildt told reporters in Brussels on Monday that the "door is certainly open for Ukraine" to sign the agreements. But he also expressed frustration at what he said was Yanukovuch's "double-speak."

In recent days, Yanukovych has both signaled his intent to sign the agreements and lambasted their original terms as harmful to Ukraine's national interest.

More from GlobalPost: Germans worry Berlin is becoming too wealthy for its own good

Any deal struck with Russia would run the serious risk of inflaming tensions on the streets. But the rumors are also a sign that Yanukovych has fumbled his geopolitical balancing act, some analysts say.

“The whole point of the crisis was that Yanukovych was playing not a zero-sum but a positive-sum game, trying to squeeze more out of both sides,” Wilson said. “And that has collapsed.”

Protesters on the streets, meanwhile, are in no mood to give in. They say the Yanukovych regime — with its crackdowns, cronyism and auctioning of Ukraine’s future — represents the opposite of everything they stand for.

“Here’s what I think,” said Sasha Sazonchik, a 40-year-old from central Ukraine, during a recent rally near Independence Square. “Europeans will act like Europeans, and boors will be boorish.”