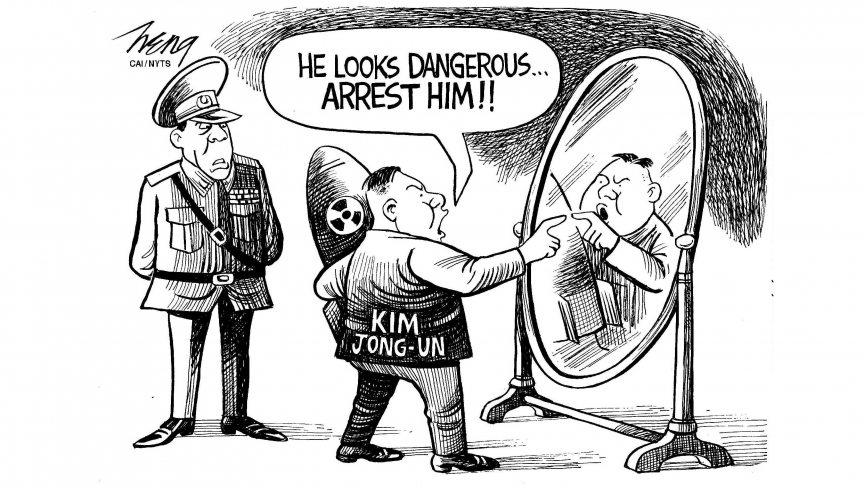 The man in the mirror may be the real danger in North Korea after last week's public purge and execution of Jang Song Taek, the uncle of Kim Jong Un.

Kim Jong Un is back in the public spotlight — days after tossing aside his former mentor, and uncle, in a purge and execution that shocked many.

With the second anniversary of his father's death looming, Kim over the weekend embarked on what North Korea calls "field guidance tours." Kim had been basically absent from the spotlight for two weeks leading up to Jang Song Taek's exeuction, the Los Angeles Times reports.

Amnesty for Snowden? Not so fast

On 60 Minutes Sunday night, a National Security Agency official made waves by suggesting the US should consider offering amnesty to Edward Snowden in exchange for an accounting of the information he took and assurances that the leaks would stop. But on Monday, according to USA Today, the White House threw cold water on that plan. Caitlin Hayden, spokeswoman for the National Security Council, said he should be returned to the US to face charges.

Are tickets the price of devotion

Devout Muslim cab drivers in New York face a challenge every day: finding a place to park their cab while they find a place to say their prayers. It's not easy, and often that parking spot might be a little non-traditional — a bus stop or by a fire hydrant, for example. And that means parking tickets. But these cab drivers say that's a price they're willing to pay, at least occasionally, to perform their religious obligation. PRI's The World has the story.

A 15-year-old boy in Egypt brought a ruler with Muslim Brotherhood slogans to school, and was arrested for it. The boy has been in custody since last month, accused of, among other things, slandering the military. Now a court has ruled the boy's father, Mohamed Abdulghani Bakara, should also be arrested for "inducing" his son to bring the ruler to school. A pair of teachers have also been arrested in connection with the incident. Reuters has the details.

When Mandela sat for an interview with 'Evita'

Pieter-Dirk Uys became famous in South Africa for the TV show he created starring a "proper Afrikaaner housewife" named Evita. Uys, of course, played the role of Evita by dressing up in women's clothing. It was wildly popular in all parts of society — so popular that Nelson Mandela, who became a fan of the show while in prison, agreed to a sit-down interview with Evita shortly after he took office. PRI's The World has the story, including a video of the interview with Evita.

The heat has finally broken in Perth, Australia, where oppressive heat was the rule for almost a week. Perth Now called the heat "blistering," with Sunday's temps topping out at 104 degrees Fahrenheit. Monday's temperatures in the city of Perth itself topped out at 99, with warmer temperatures inland — leading to a ban on fires in the open and "hot work" — grinding, welding and other similar activities. Fortunately, the heat looks set to break with today's high forecast for 86 and temperatures dropping below 80 by Friday.