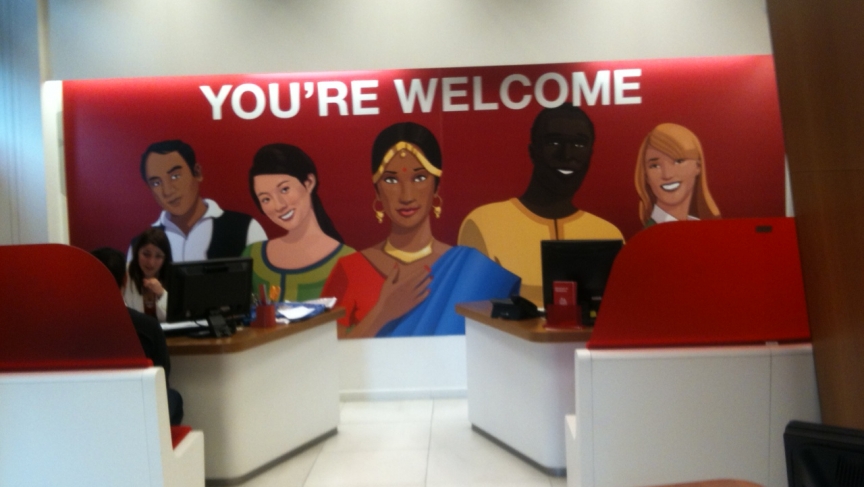 Customers visit a Milan branch of Extrabanca, an Italian bank that caters to immigrant clients.

Under a highway overpass on the outskirts of Milan is an Italian-Chinese restaurant, Il Portello. The owner, Zhou Biao, 32, grew up in Milan in his immigrant parents' one-room sewing workshop.

He opened his restaurant six years ago with the savings from his family's business. But when Biao tried to get a bank loan to expand, Italian banks wouldn't even give him a small mortgage.

“Short of going to loan sharks, I was ready to go anywhere to get the loan, even to China,” Biao says.

Italy is still struggling through one of the worst recessions in decades, and in recent months, thousands of small businesses — the backbone of the Italian economy — have gone under. Credit is tight. Italian banks require collateral that matches the amount of the loan, which makes it especially hard for immigrant businesses. Immigrants often don't have that kind of collateral.

Biao eventually managed to get a loan for $500,000, at a hefty starting interest rate of six percent. It came from an Italian bank — the first bank in Italy geared toward immigrants.

Andrea Orlandini, an Italian financier, says he got the idea of a bank for immigrants after moving back to Milan from London.

“It was just a matter of seeing things that were there,” he says.

What he saw was a "changed" Italy. Immigrants were playing a greater role in the economy, but they were often shut out from credit. According to Orlandini, that Italian banking blind spot became his opportunity.

“It took maybe a year and a half, traveling from the Alps to Sicily to meet potential investors, 50,000 kilometers by car,” he adds.

The result was Extrabanca, which caters to the needs of immigrant clients. While most Italian banks close in the mid-afternoon, this one is open until 7 p.m., six days a week. Tellers are from places such as China, the Philippines and Peru — the same countries as the bank's customers.

“Even for an Italian to understand bank rules, it's a little bit complicated, so you can understand how hard it is for immigrants who don't understand the language,” says Valentina Gonsal, a teller from Sri Lanka.

Even more important, the bank's risk assessment isn't based solely on collateral and paychecks. Other factors are also taken into account, such as having family already settled in Italy or having other community members who the bank trusts — like restaurant owner Zhou Biao — who can vouch for a borrower's reputation.

Orlandini concedes the more flexible loan criteria have led to some bad loans, though he says his default rate is in line with that of other banks. His biggest problem, he says, has been people taking loans and then disappearing from the country.

The bank has yet to turn a profit, but as mainstream banks across Italy are closing branches, Extrabanca has opened four new locations in the past six months.

Orlandini says it's been an eye-opening experience, working with immigrants starting up businesses.

“They are used to being poor, so they're not so much scared. They see their life is improving,” he says. “They are working harder than Italians, so in 20 to 30 years, they'll probably become the new middle class.”

With 20,000 new immigrant-owned businesses opening each year in Italy, it's an emerging market that other banks might do well to court, too.