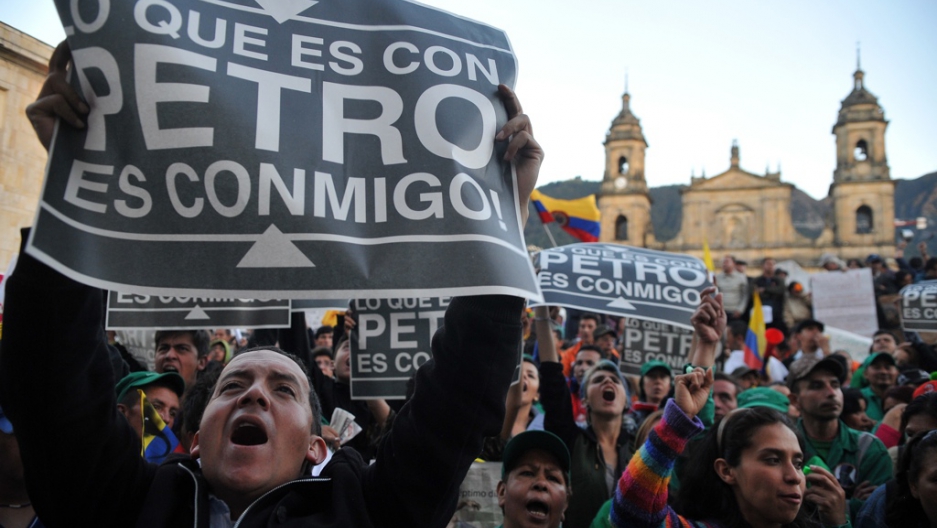 BOGOTA, Colombia — Getting fired may be the best thing that’s ever happened to Bogota Mayor Gustavo Petro.

A former left-wing guerrilla and high-profile legislator, Petro, 53, had been far less successful running Colombia’s largest city. Until last week, he was widely viewed as autocratic and ineffective. His dream of using Bogota City Hall as a launching pad for the presidency appeared dashed.

But then came Monday’s drastic decision by the Colombian government’s inspector general to remove Petro from his post and ban him from holding public office for 15 years over a scandal involving — of all things — a failed plan to improve garbage pickup.

People have rushed to Petro’s defense, with everyone from Marxist guerrillas to the incoming US ambassador to Colombia insinuating that the ruling belongs in the trash heap.

On Friday, thousands of protesters marched through Bogota in support of Petro, who has issued nightly manifestos to his followers.

“We must stop fascism,” Petro declared to a huge crowd in Bogota’s Bolivar Plaza, which he compared to Tahrir Square, ground zero for Egypt’s 2011 uprising. “Bogota must be at the vanguard of this movement.”

Instead of destroying a politician he clearly despised, Inspector General Alejandro Ordonez — a right-wing ideologue and outspoken critic of everything from gay rights to peace talks to end the country’s half-century-old guerrilla war — appears to have revived Petro.

A poll published this week by the Bogota firm Datexco showed that Petro’s job approval rating had shot up from 30 percent to 50 percent, the highest level since Petro was sworn in as mayor on Jan. 1, 2012. That prompted the Bogota newsweekly Semana in an illustration to depict Petro, who wears thick glasses and can appear somewhat nerdish, as Superman.

All of this stands as another improbable twist for one of Colombia’s most controversial politicians.

Petro was born into a working-class family on Colombia’s Caribbean coast. After moving to Zipaquira, a city just north of Bogota, Petro joined the M-19, a left-wing guerrilla group. Shortly afterward he was arrested, imprisoned and tortured. But in an interview with GlobalPost last year, Petro said he had no regrets.

“Societies always need rebels,” Petro said, and pointed to what he considered their forebears of the United States, Latin America and France. “There was Washington, Bolivar, and Robespierre. Then came later generations of rebels. They changed the world.”

Eventually, Petro soured on armed struggle as the way to change the world and came to believe that, rather than resolving problems, war simply provoked more violence.

After the M-19 signed a peace agreement with the government in 1989, Petro was elected to congress and was held up as an example of how former rebels could make the transition to legal politics.

He moved up to the senate and, in 2006, he bravely stood up on the chamber floor to denounce long-standing ties between his fellow politicians and right-wing paramilitary death squads. Eventually, about one-third of Colombia’s lawmakers ended up under investigation, on trial or in prison.

Some questioned Petro’s moral authority given his membership in the M-19, which occupied the Palace of Justice in a 1985 siege that left more than 100 dead. Petro claims he wasn’t involved in the violence, but detractors called him a guerrilla disguised as a politician. Petro received numerous death threats and often slept with an automatic rifle in his bedroom.

After a failed run for president, Petro was elected mayor of Bogota in 2011. But the pivot from opposition legislator railing against the system to CEO of a city of 8 million people plagued with crime, epic traffic jams, and huge gaps between rich and poor proved enormously difficult.

Complaining of Petro’s authoritarian style, top aides resigned. He lacked a majority on the city council and rammed through several measures by decree, including his garbage pickup plan.

The idea was to replace overcharging private firms with a newly created public company. The result was massive cost overruns and chaos. For three days in December 2012, mountains of garbage piled up in the streets. Ordonez, who has the power to investigate and fire public officials, ordered his removal for "violating constitutional principles of commercial competition and freedom."

Even Petro’s political foes saw the ruling as overkill, as the 15-year ban would effectively end his career. It even sparked indignation among foreign diplomats.

Todd Howland, the United Nations high commissioner for human rights in Colombia, said the ruling appeared to violate the rights of voters who elected Petro. Kevin Whitaker, Washington’s new envoy to Bogota, said Petro’s dismissal could “erode” efforts by the Colombian government to negotiate a peace treaty with the Revolutionary Armed Forces of Colombia, the country’s largest guerrilla group better known by its Spanish acronym the FARC.

The FARC has long justified its armed struggle by claiming that the Colombian establishment will never allow the left to govern. “In one blow, Ordonez gave us a lesson about what democracy really means to the oligarchy and showed that there are zero guarantees for carrying out independent politics,” the FARC said in a communique.

Petro has until January to appeal the ruling. Meanwhile, people are now calling for the head of Ordonez. On Tuesday, former Attorney General Viviane Morales said Ordonez should be replaced with someone who is less “ideologically biased.”

Amid the furor, a Bogota lawyer with close ties to the mayor, predicted: “Petro is going to be the big winner in all of this.”