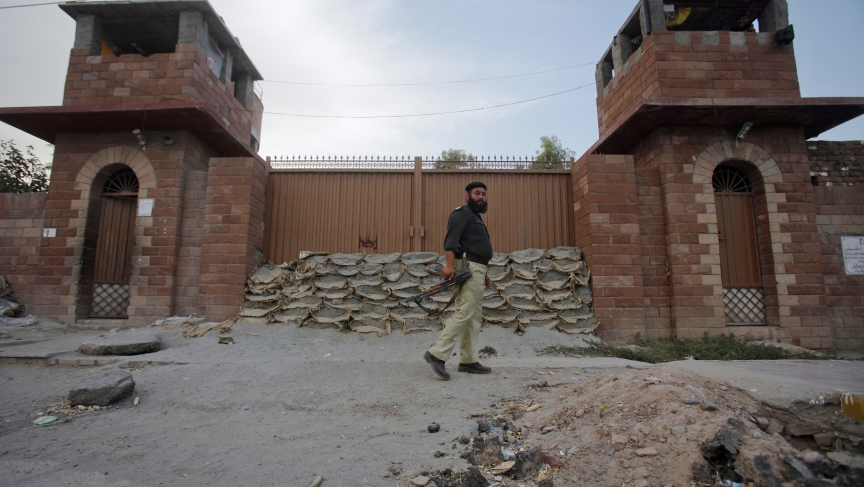 A police officer walks past Central Jail in Peshawar where Pakistani doctor Shakil Afridi now sits. Afridi was arrested in May 2011 for helping the CIA find Osama bin Laden.

The Pakistani doctor who helped the CIA find Osama bin Laden remains in jail even after a previous attempt to try him for treason was rejected.

Now, it seems Shakil Afridi will face a new set of charges. Afridi was arrested by Pakistani authorities soon after the 2011 US raid on Abottabad that killed bin Laden.

He's being held a in Peshawar prison, allegedly for killing a former patient. His lawyers believe he'll soon be charged with medical malpractice and sexual harassment.

And now, his defense could be a bit more complicated.  One of a panel of three lawyers representing the doctor has fled the country. Another of the three, Qamar Nadeem, said the Pakistani government is making the doctor a scapegoat to cover up their own intelligence failings.

And Nadeem told the BBC that the US is responsible for Afridi's continued miserable situation.

At one point, former Secretary of State Hillary Clinton demanded Afridi's release, but that didn't happen.

The fact Afridi hasn't been convicted of treason suggests US pleas have had some effect. But the "responsibility" Afridi's lawyers are asking the US to take, more or less stops there.

"Is he one of us or one of them?" asked Marc Sageman, a former CIA case officer. He said it's simply human nature to divide the world up this way.

But there's also something of a Catch-22 in this case.

Even if US officials wanted to do more, trying to force the Pakistani government to release Afridi would only make him look more like a traitor in the eyes of many of his countrymen.

But at the same time, said Daniel Byman, a professor at Georgetown University and an expert on national security issues, so publicly ";eaving a man behind" hurts the US' ability to recruit foreign agents in the future.

"Certainly there would be a few people who would be considering these bigger questions and you do want to send them the right message. In the Afridi case, the message would be that the United States is willing to let locals who work with it suffer the consequences if they get caught," he said.

The Afridi situation raises a red flag for some critics for another reason, though: The CIA used a doctor in one of its operations. Afridi allegedly set up a fake polio vaccination campaign in Abbottabad to get DNA from the bin Laden family.

Vincent Iacopino, with Physicians for Human Rights, said this case may have led to tragedy.

"After this happened in 2011, there were attacks on polio workers, and more than three-quarters of a million children were not immunized for polio who were scheduled," he added.

Iacopino said the CIA's decision to use a doctor to do its bidding is sending another message: "The health care of non-Americans simply doesn't matter."

But despite the anger being expressed in Pakistan and elsewhere, former CIA agent Marc Sageman doesn't think the Afridi case will have a chilling effect on America's ability to recruit "helpers." He said spycraft is all about building individual relationships.

"This is not about money, you know, people really believe in what they do," he said. "And the more you're dedicated to it, the better you do your job."

Sageman said he often — as the CIA puts it — "fell in love" with his sources. But more often than not, in the end, he had to leave them to their fate.