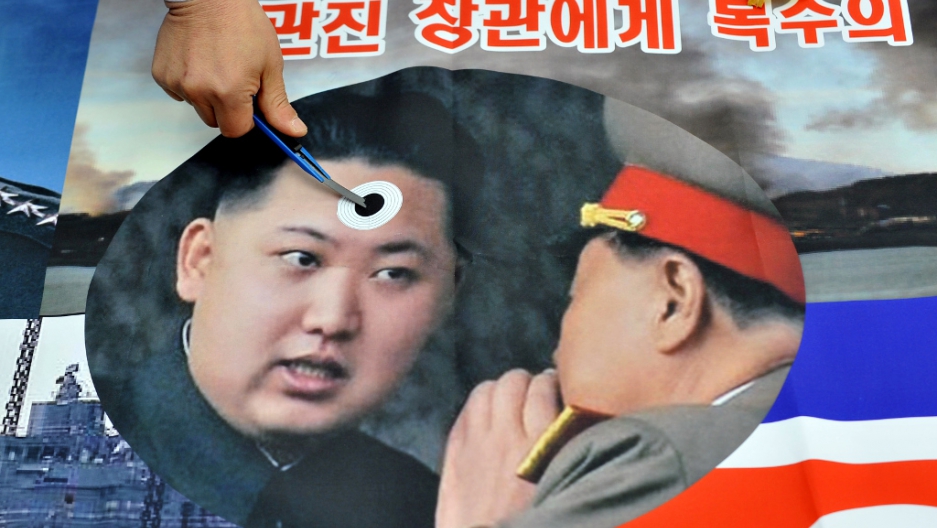 A South Korean activist stabs a pocket knife on a picture of North Korean leader Kim Jong-Un during an anti-North Korea rally near the national assembly in Seoul on March 22, 2013. Some South Korean web commentators want the US to blame North Korea for the Boston Marathon bombings.
Credit: Jung Yeon-Je
Share

SEOUL, South Korea — On Sunday, North Korea announced that Kim Jong Un’s uncle, the powerful guiding-hand regent, had been excommunicated from the leadership.

In many ways, the news leading up to the execution was unprecedented in recent decades. State media released an unusually scathing statement and a television broadcast, railing against Jang’s “depraved” lifestyle and supposed anti-party scheming.

Jang was an entrenched regime veteran, placing this sudden shake-up among the most significant in North Korean history.

In the late 2000s, Kim Jong Il, the father of the current leader, was in poor health, culminating in his death in December 2011. Experts believed that Jang took the role of kingmaker, ushering Kim Jong Un to the throne and playing a hand in his everyday affairs.

As news of Jang's death emerged, South Korean President Park Geun Hye called the current leadership a “reign of terror” and warned that North-South relations could deteriorate even further.

Beijing, too, is uneasy about the treatment of a man who was a preeminent figure behind both Chinese trade deals and a special economic zone where the country is a major investor. The execution amounts to a “serious” attack on China, said Andrei Lankov, a North Korea expert at Kookmin University in Seoul.

Predictably, Jang's excommunication was followed by a torrent of unsettling (and unconfirmed) reports this week: Rumors of an ideological schism in the highest party echelons; a possible gold sell-off to avert economic chaos; and news of a senior aide’s supposed defection.

Experts — unable to see into the black box of elite North Korean politics — are debating two main theories on what the recent events mean (along with a smattering of views in between).

For a world nervous about a nuclear-armed rogue state, neither scenario is good news.

For some, the purge appears to be a paroxysm of an internal power struggle that could lead to chaos or collapse.

For others, it smacks of a more timeless narrative: As kings commonly oust their regents, the boy dictator could be casting away any possibility of a titular reign, consolidating power over a fading generation of elderly lieutenants. In other words, for a ruthless dictatorship, it's business as usual.

Here’s a look at what the possibilities mean for the mysterious garrison kingdom.

One camp of observers says that Kim Jong Un is a hot-headed and irrational leader who cannot be easily understood. Like his father, his reign has proven difficult to decipher, they say. Some of his decisions make little sense.

Why, for instance, would the regime publicly test missiles in violation of United Nations sanctions, inviting more embargoes? Why would it fling bold war threats against two enemies that harbor superior military firepower, the United States and South Korea?

Part of the answer could be found in the autocrat’s temperament, some say.

Or, to put it bluntly, the treatment of Kim’s uncle means “North Korea’s absolute ruler is a volatile man-child with a small nuclear arsenal and no adult supervision,” writes expert Joshua Stanton on his One Free Korea blog.

Jang’s dismissal and execution come after what appears to be an ongoing purge of North Korea's top military ranks, further signifying that big changes are underway. Since July 2012, four separate army chiefs have been thrown out, a move that experts across the board agree is incredibly unusual.

What’s next? If we accept this narrative, such a loud, public haranguing could be sending a chill throughout the top ranks and could soon foment defections.

In an extreme case, discontent could lead to a plot against Kim Jong Un himself. On Friday, North Korean state media accused Jang of scheming against the top marshal, although this may have simply been a way of scapegoating the second-in-command, experts said.

Regardless, the supposed power struggle probably would have come about from an ideological schism between factions affiliated with Jang and more conservative security bodies, reports New Focus International, a website that tracks events based on sources in the country.

With a crack at the top, the future of North Korea is increasingly uncertain.

Kim Jong Un has tried to reconcile market-oriented and militarist rivals with his dual policy of economic and nuclear development, called byungjin. But if the elite coterie is indeed becoming more fractious, the dictator may be in line for an upheaval down the road.

Far from signifying the decline of the Kims, this theory notes that the ruling dynasty has repeatedly emerged victorious from all manner of calamities in the past three decades. This episode is probably not so different.

The three Kims’ rule has persisted despite the collapse of their main economic patron, the Soviet Union — followed by a famine that wore down the apparatus of total control. North Korea has never fully recovered. Today, the absence of a well-functioning official system has given rise to all sorts private trading activities and so-called illegal exchanges near the Chinese border.

According to this theory, the ruling elite suddenly doesn’t look like a camp split between Stalinist ideologues and economic reformers.

Regardless of their leanings, the biggest concern is survival at any cost.

As such a bevy of pragmatists has emerged, acting more rationally than meets the eye and ensuring the regime does not fall apart.

This significantly alters the backstory to recent events.

Kim Jong Un, the young despot — he's believed to be in his early 30s — may simply be doing what so many autocrats have done before him: Taking the reins from a bossy regent and ushering in a new generation of lieutenants, explains Lankov, the North Korea expert.

“No king likes a cranky old regent telling him what to do,” he told GlobalPost. “In the coming years, we will see many more of the older leaders lose their positions,” making this affair one of many.

Lankov admitted, though, the Kim Jong Un’s decision to publicize the purge may have been a serious error.