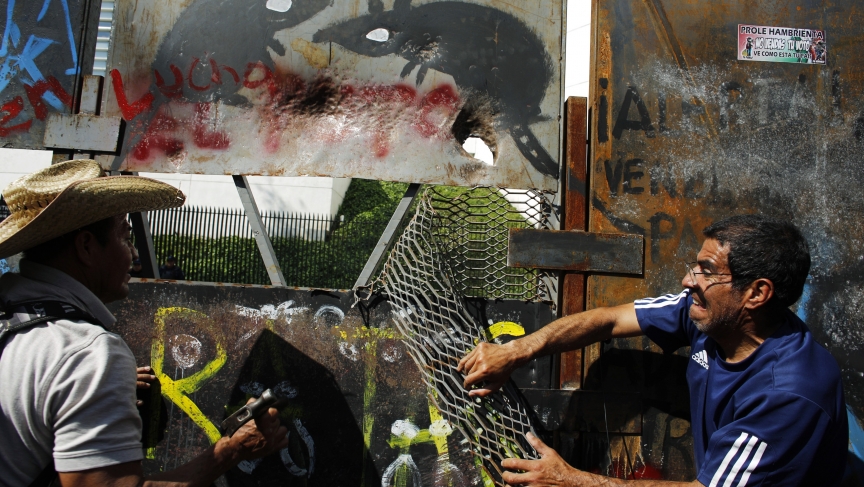 Protesters in Mexico City try to tear down a barricade surrounding the senate building where Mexican committees gave general approval to an energy bill allowing private investment in the country's oil industry December 9, 2013. The move was the biggest opening of the state-controlled sector in 75 years.

It's called Pemex, but Mexico's state-run oil company is a little less "Mex" as of Friday.

A historic vote in the country's Congress has opened Mexico's oil industry to foreign investment. Pemex's monopoly has been one of the sacred cows of Mexican politics since the country nationalized the industry and kicked out foreign oil companies in 1938 in the wake of the Mexican Revolution.

Carlos Rodriguez, the Bureau Chief for Bloomberg News in Mexico City, said despite Mexico's open economy, which has free trade agreements with countries all over the world, the Mexican oil industry has remained closed-off.

"You couldn't find similar laws in almost any country, not even in Venezuela or Cuba. You had to turn to North Korea to find another country as restrictive to the private sector in the energy industry," Rodriguez said.

But concerns over Pemex's ability to effectively drill the oil, and a desire to encourage economic growth led Mexican lawmakers to consider opening up to foreign investors.

"Just in deep waters, Mexico has about 26 or 27 billion barrells of oil. Just to put into perspective how little Mexico, or Pemex, was doing: On the Mexican side of the Gulf of Mexico, in deep waters, they drilled about six wells. On the U.S. side, it was over 100 wells," Rodriguez added. "That can show you a little bit of the contrast when you have a lot of companies looking for that oil to when you have to put all up to one company, as in the case in Mexico until this year."

Still, the decsion wasn't an easy one.

"As anybody who has grown up in Mexico, we know that in schools since we were little kids, oil and Pemex were kind of nationalistic symbols that shouldn't be touched by anyone. Not by the private sector, and even less by foreigners," Rodriguez said. One congressman, Antonio Garcia, even stripped down to his underwear before the vote, denouncing what he called "the stripping of Mexico's oil wealth."

"The argument from the opposition of the bill was 'Now the profits of the oil aren't going for the Mexican people, they will go over to private companies," Rodriguez said. "The counterargument is really 'If the oil stays underground, nobody is getting a profit from it. Nor the people, nor the state, nor the companies."