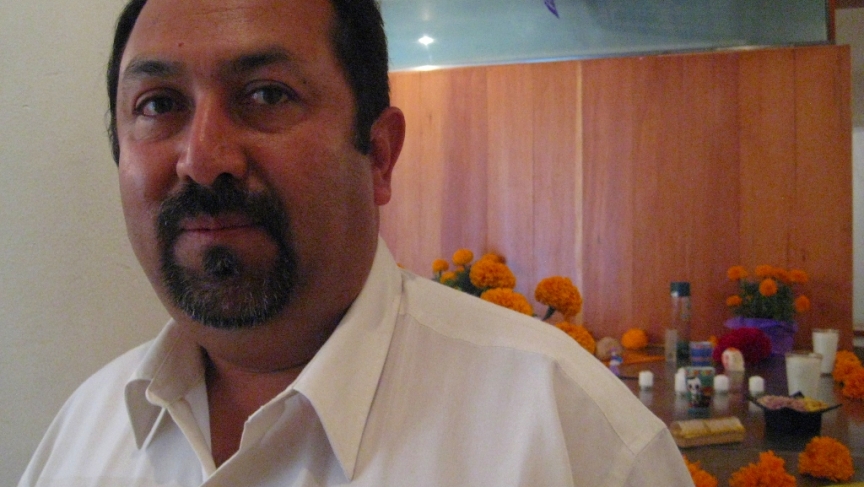 Mexican reporter Jesús Lemus, who recently published a book about his time in prison.

Mexican reporter Jesús Lemus had no idea what was in store for him when he got a call from a longtime source.

It was May 7, 2008. The source was a police commander promising a scoop.

"He laid a trap for me, telling me to show up at a certain place to get information about some bodies of murder victims that had been found,” Lemus said.

When Lemus arrived, he found out the story was a ruse. He said the police commander and his men kidnapped him and took him to a house where he was tortured for two days. Lemus, who founded the newspaper he worked at in Michoacán, said his captors demanded he sign a confession stating he was a member of various drug cartels. He refused.

Meanwhile, his wife was frantic about his disappearance. She contacted Balbina Flores, the Mexico City-based represenative for Reporters Without Borders, a non-profit based in Paris that promotes press freedom. Once Flores started making calls, Lemus reappeared and was formally arrested.

Flores said the Lemus case was strange from the start. First, she said, it all happened so fast.

"In a span of less than two weeks, he was ordered imprisoned without bail,” Flores said.  She said the attorney general's office in Guanajuato, where Lemus was arrested, told the media they had arrested an organized crime cell and among them was a “narco-journalist.”

Presumed guilty, Jesús Lemus was transferred to a maximum security federal penitentiary known as Puente Grande, in Jalisco. Some of Mexico's most notorious criminals have been held there, including the leader of the Sinaloa cartel, Joaquín “El Chapo” Guzmán.

Lemus began interviewing some of the inmates, in whispered late-night talks. He took notes on scraps of toilet paper that he would later pass to his wife during visits.

"When I heard the name of famous inmates, I struck up conversations with them,” Lemus said. “I told them I was a journalist. Many thought I was kidding; others took me seriously. But in the end, they'd say, 'Well, if you get out of here one day, publish whatever you want.' They knew I was in a difficult situation and wasn't easily going to get out."

Those scraps of toilet paper eventually became the basis of his book, "The Damned: Chronicles from Puente Grande."

After three years in prison, Lemus was finally cleared of all charges. But he never got an official apology. And he still doesn't know who he angered with his investigative reporting, though he knows it was someone with high-level connections.

The harassment didn't end with his release, though. Shortly after returning to his home in La Piedad, Michoacán, he began to receive death threats.

Rogelio Hernández, with Casa de los Derechos de los Periodistas, a Mexico City-based organization that supports threatened journalists, helped Lemus and his family escape La Piedad. He said the Lemus case shows just how dangerous it is for journalists in Michoacán to do their job.

"It's a pathetic case not only for the legal injustice of his baseless incarceration, but also because of how it reflects on the Mexican justice system and our vulnerability before a government which has neither resources nor effective mechanisms for protecting journalists,” Hernández said.

Today, Jesús Lemus is no longer editor and publisher at the regional newspaper he founded. It collapsed during his time in prison. However, he still works as a journalist, freelancing for a national investigative outlet. And he said his torture and imprisonment continues to haunt him.