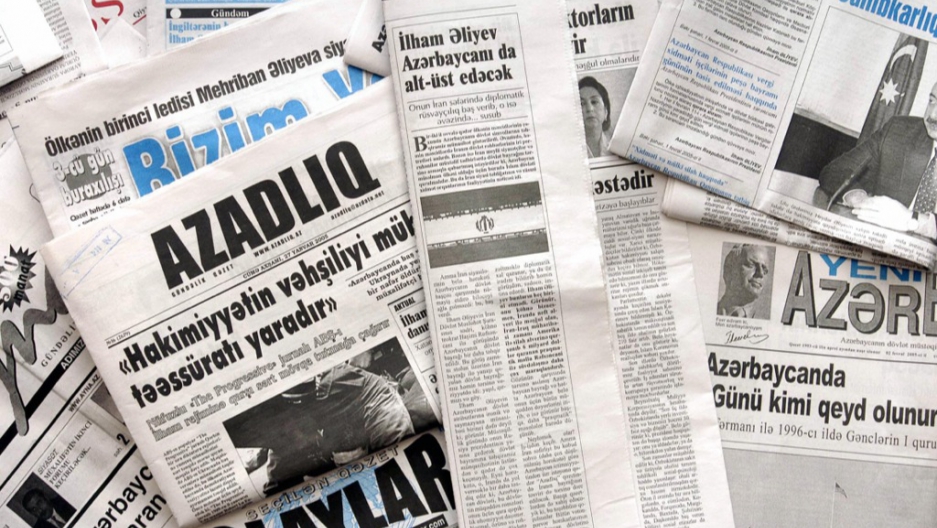 BERLIN, Germany — No one expected any surprises in October’s presidential election in my home country, Azerbaijan, and their expectations were accurate.

The incumbent president, Ilham Aliyev, won a landslide victory, following a campaign marred by restrictions on fundamental freedoms. His re-election moves Azerbaijan even further toward a family dynasty, with 20 years of rule by the Aliyev family so far. With no term limits, Ilham Aliyev could be president for life.

Some in Azerbaijan hoped that once the election was over, the government might lighten up on the unprecedented crackdown that’s been underway all year. Those hopes were dashed.

One sign that things haven't changed: The authorities are tightening the noose around opposition media. Fresh from Aliyev’s Oct. 9 victory, the authorities seem determined to deliver a final blow to the country’s two most vocal pro-opposition daily newspapers — Azadliq ("Freedom" in Azeri) and Yeni Musavat ("New Equality").

Azerbaijan is near the bottom in international rankings on media freedom. Reporters Without Borders ranks Azerbaijan 156 out of 179 countries in the 2013 World Press Freedom Index. That’s an improvement over 2012, when it was ranked 162, but worse than in all other years since 2007.

For the past two decades, since Aliyev’s father, Heydar, became president, Azadliq and Yeni Musavat have been fiercely critical of the government. In return, the authorities have attacked, threatened and arrested some of the paper’s journalists.

The chief editors of both dailies have been jailed over the years on politically motivated charges. Several of their journalists, including Azadliq’s chief editor, fled Azerbaijan, fearing for their safety.

Many journalists in Azerbaijan resort to self-censorship. Crippling libel suits against Azadliq in particular seemed aimed at getting the paper to avoid writing about the powerful government officials and businesses linked to the presidential family.

These newspapers have also come under various forms of financial pressure that have choked off their sources of revenue.

On Oct. 17, a week after the election, the administration for the subway system of Baku, the capital, banned the sale of all newspapers on the premises of the city’s metro stations.

It doesn’t seem like a dramatic move, but it dealt a heavy blow to the newspapers’ sales, as metro stations were the only places where large numbers of papers were sold daily.

Azadliq had been selling 1,500 copies a day in these stations and says its losses since the ban have been about $23,000 a month, an amount that would cover staff salaries. A few years ago, the Baku mayor’s office banned the sale of newspapers on the streets, which had been another important source of revenue for opposition newspapers.

Azadliq has been a particular target in this crackdown. On Oct. 25, a court froze the paper’s bank accounts after it failed to pay civil libel damages in one case. Another court ruled in favor of the petition by the head of the Baku Metro Service, changing the terms of payment of another civil damages suit from monthly installments to a single, immediate payment.

Azadliq’s inability to settle its own arrears to the state-owned printing house has left the paper in limbo.

For years, editors of opposition outlets have claimed the authorities regularly warned advertisers not to place ads in opposition papers, leaving them without another important source of revenue.

The editors cite retaliation against advertisers who have ignored the warnings. On Nov. 9, facing dire financial straits as a result of these accumulated financial problems, both newspapers suspended operations. After several days of marathon fund-raising, Azadlig and Yeni Musavat are again operating, but they are hanging by a thread.

The state-run Mass Media Support Fund, a governmental fund established by President Aliyev in 2009 to contribute to the growth and development of mass media, ceased its annual financial support to Azadliq in late November, citing the paper’s outstanding lawsuit over debts as a breach of its agreement. Some saw the fund as an effort by the government to guarantee favorable coverage.

The pressure on Azadliq and Yeni Musavat is one part of the government’s concerted efforts to suppress dissent and control society. Without these dailies, Azerbaijani society would lose critical voices that cover important issues of public concern and politically consequential matters on a regular basis.

Azerbaijan hasn’t reached the very bottom of the Journalists Without Borders list quite yet, but its officials seem to be trying for that distinction.

Vugar Gojayev is a fellow at Human Rights Watch and is based in Berlin.