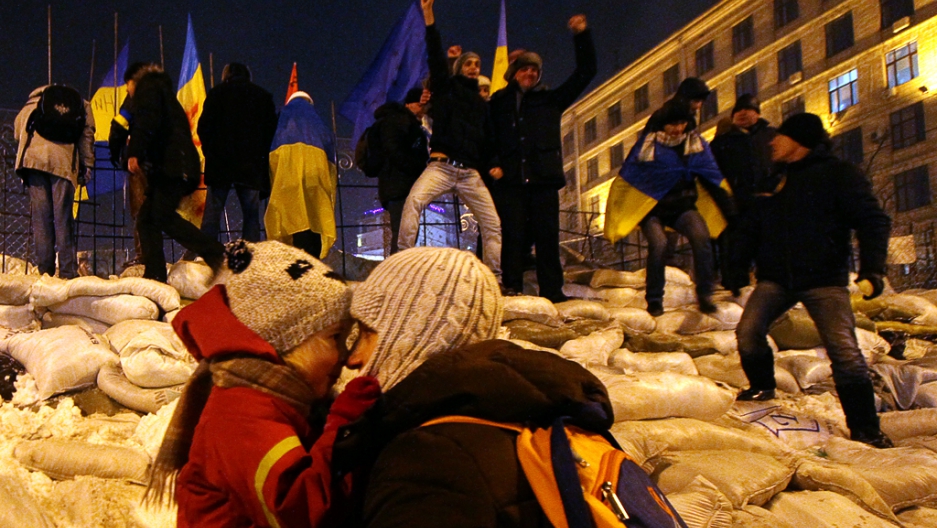 Protesters stand on their newly restored barricade in Kyiv's Independence Square, late on December 11, 2013, destroyed earlier by police during a raid on the protest camp.
Credit: AFP
Share

Speaking in Brussels, Ashton said Yanukovych had assured her he planned to sign the agreement, slthough he added that his country would require at least 20 billion euros ($27 billion) a year to upgrade its economy.

His apparent about-turn may not be enough to quell the protests, however. They swelled after a violent crackdown earlier this month.

More from GlobalPost: Ukraine: As a crackdown fails, a protest is reinvigorated

"If the deal is signed now, I won't leave the protest," said Dmitry Zhuk, who has joined the protests after work every day. "I don't think anyone will leave."

Police in riot gear attempted to disperse protesters from Independence Square overnight on Wednesday only to be pushed back by reinforced numbers of demonstrators.

US Secretary of State John Kerry expressed "disgust" at the use of force. Dozens were reportedly hurt in skirmishes.

Lawmakers in the United States said Wednesday they were considering measures against Ukraine including sanctions, visa restrictionsandlegislation in response to the crackdown. They hope the threat pressures Yanukovych to show restraint against protesters.

During a state of the nation speech, he highlighted the benefits of a customs union he wants the former Soviet republic to join.

"Our integration project is based on equal rights and real economic interests," Putin said of the union that already includes Belarus and Kazakhstan. "I'm sure achieving Eurasian integration will only increase interest from our other neighbours, including from our Ukrainian partners."