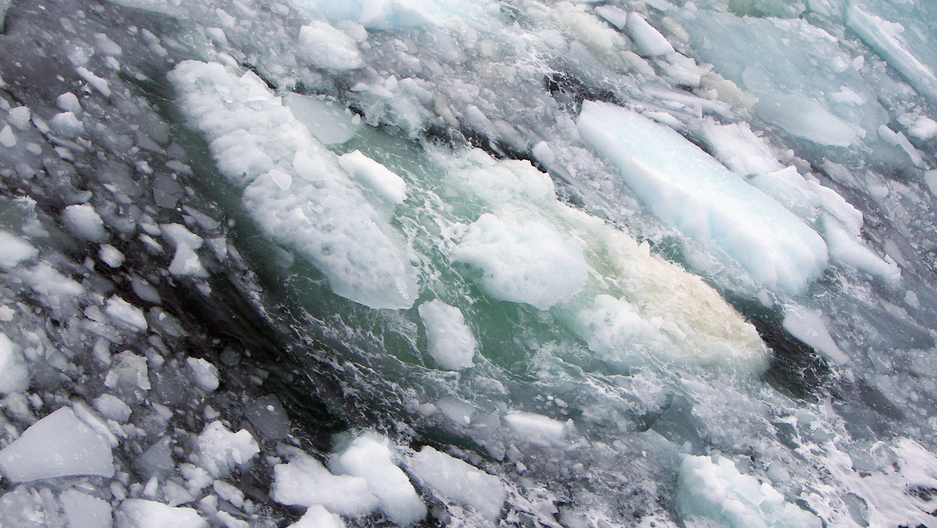 The sea surface above the East Siberian continental shelf of the Arctic Ocean is made up of broken ice and methane bubbling to the surface.

There are millions of tons of the powerful greenhouse gas methane trapped underwater in the continental shelf of the Arctic Ocean.

This methane had been held in place for thousands of years by a cap of frozen soil on the seabed. But now research at the University of Alaska in Fairbanks has found this methane is escaping into the atmosphere at faster and faster rates, adding to global warming in a feedback loop that accelerates the warming.

The study concentrated on the East Siberian Arctic Shelf. Natalia Shakhova, lead author on the study, says this particular area makes up about 25% of the Arctic shelf.

"Because the permafrost was thought to be stable and reliably preventing this methane escaping from the seabed deposits, this area has never been considered a source of methane to the atmosphere, never until very recently when we started investigating this area 10 years ago," she says.

Roughly 17 million tons of methane are released into the environment annually from this shelf.

"Arctic tundra is thought to be the major source of methane, natural methane, in the northern hemisphere, so it’s kind of comparable to terrestrial sources," Shakhova says. "For hundreds of thousands of years ... the permafrost on top of the sediment has been serving as a cap, as a seal, preventing the escape."

As the permafrost thaws, a phenomenon happening on land and under the sea, it becomes less efficient at containing greenhouse gases, like methane. And methane is a particularly nasty greenhouse gas, with one ton of methane packing the climate changing potential of at least 20 tons of carbon dioxide, Shakhova adds.

Methane has a relatively short lifespan, 10 to 30 years, but it is converted to carbon dioxide — so still dangerous to the atmosphere.

One of the biggest concerns is this Arctic methane will create a dangerous loop, with the methane raising the temperatures, melting more of the permafrost and releasing more methane.

But, it's still possible this situation could be stemmed, or at least slowed.

"We better believe in science and in ourselves because I’m sure that we will be able to come up with ideas how to solve this problem, how to fix it, how to mitigate, how to maybe recover this methane," Shakhova says.