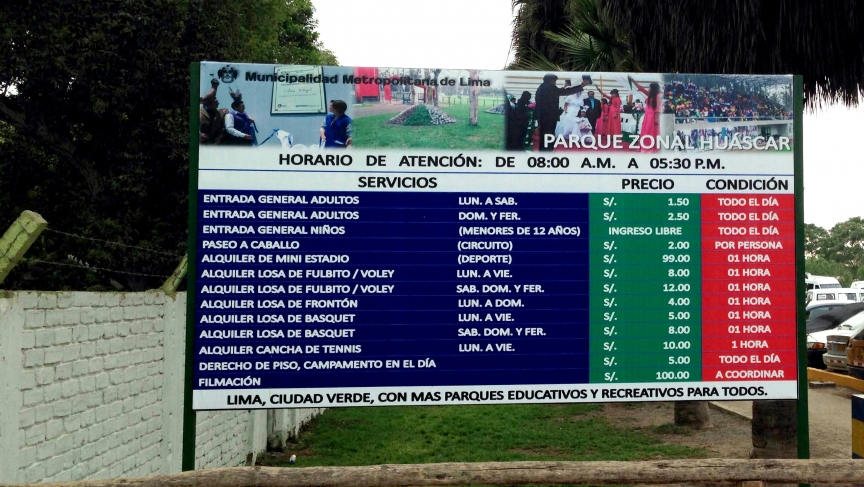 The Huscar Park in a working-class neighborhood of Lima is a public park, but you have to pay admission. It's extra for things like using the basketball courts and making a video.

At either end of the little street where I live in Lima, there are big iron gates and a guard. At night, the gates get locked. The neighbors say it keeps things "private,” even though this is a public street.

I see gates like this all over the city, in all sorts of neighborhoods, but coming from the US, it still feels kind of weird.

So I asked Manuel de Rivero, an architect and urban planner, if it's even legal in Lima to gate off a public street. Strangely enough, it is. He says it all goes back to the 1980s when Peru weathered civil war; on one side, there was the terrorism of the Shining Path, and on the other, repressive government forces.

“In the ‘80s and ‘90s, this city was a war zone. We had car bombs. It was a failed state,” de Rivero says. “Since the state couldn't deal with this insecurity, they allowed certain places to put in gates.”

Then came more gates, until they were all over the place. The war ended more than a decade ago and Lima now has a thriving economy. But you can still see the effects of the war. Many people still want the gates for security, though de Rivero says what they really do is make the city feel fragmented.

They also make people think private spaces are better than public ones, he says. And that's even being applied to green spaces.

“Leisure is a new thing in Lima,” says Rivero, “because it’s only 10 years since the economy started to get better and society became peaceful.”

De Rivero sends me off to the Huscar Park in Villa Salvador to see what he means. It's on the southern outskirts of Lima, in a working-class neighborhood. Outside, an old man is busking, next to vendors lined up with cotton candy and games.

The park is huge. There are stands of eucalyptus and palm trees, soccer fields, basketball courts, a big lagoon, and all of it is surrounded by a big iron fence. Anyone over the age of 12 has to pay to get in — about 50 cents on weekdays or a dollar on weekends. It's extra for the pool and tennis courts. There's even a $35 fee for taking videos.

Mercedes Masa lives nearby. During the week, she sells children's books on the street. Today, she’s here with her daughter, Genesis, who's climbing on a jungle gym. Mercedes says the park wasn't always so nice.

“Now there are more games, there's a pool,” she says. “I don’t mind paying an entrance fee because it keeps the park running.”

“That's not good,” she says, “but I'm proud of living here because Villa Salvador has always been a forgotten part of the city, and it's come a long way.”

According to city officials, many people share Masa’s attitude.

“We've done surveys, and the public prefers to pay and get good service — a clean park, a safe park — rather than not pay,” says Anna Zucchetti, president of Lima's Parks Commission. She says at this point, there aren't enough government funds to run the city's big public parks, like Huascar, without admission fees.

It’s a sign that confidence in Lima’s public institutions remains low, even now that the war is long over, says Manuel de Rivero.

“It's a city where people have solved their issues by themselves. This idea of institutions that care for the common good is non-existent,” he says.

But de Rivero says it really doesn't bother him if this notion of the public good has a long way to go; he's just happy to see the city making progress.

Carlos Neira goes to the Huascar Park at least twice a month with his two young daughters. He’s grateful to have a park where he can take his kids and, like Mercedes Masa, he doesn't mind paying.

“It’s big, comfortable and pretty,” he says. “Best of all, there’s a big variety of food for sale.”

That, he says, is important.

This story was reported in collaboration with Radio Ambulante.