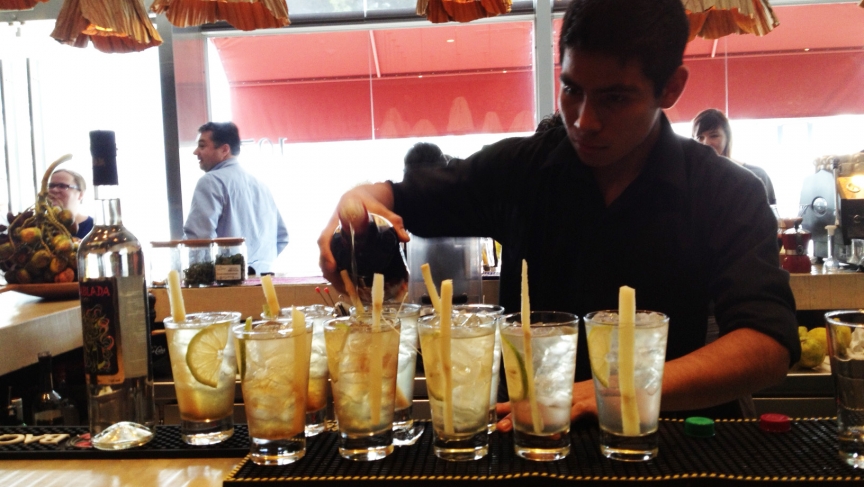 A bartender at a Lima restaurant whips up one of Peru's signature pisco cocktails.

She was working full time at a wine and drinks publication and ended up meeting Melanie and Lizzie Asher. They are sisters who had been born in Peru, but had moved to the US when they were young. The Ashers, though, had kept their connections to their native land alive and had decided to start a pisco company called, wait for it, Macchu Pisco.

"I was besotted with my first pisco sour," Akkam remembers. "It was beautiful, tart, crisp. And ever since then, I've just been intrigued by the spirit.

"It's essentially a grape brandy, and it's fermented and distilled, which is why it has wine and spirit-like qualities to it. And that's why it is delicate, but powerful at the same time, depending on the grapes that are being used. Some [piscos] you would want in a pisco sour, and others you would just want to sip like a nice rum or a nice brandy."

Fast forward to 2013, and Akkam is headed down to Peru to write about pisco for PUNCH magazine, in part to profile the Asher sisters and their business.

Akkam says she quickly learned the pride of place pisco has in Peruvian culture.

"It's Peru's national spirit," Akkam says. "It's been a huge part of Peruvian culture for centuries. So when you go to someone's house, say in Lima, there will be whole pitchers of pisco sour waiting for you."

Akkam says the experience in Peru was amazing. "If I order a pisco sour in New York, I might be the only one enjoying one. But if I'm in a restaurant in Lima, and everyone's drinking pisco sours and there are all these pisco bottles that I've never seen before, there is something magical about that," she says. "You feel like you're doing something special and authentic."

And, Akkam notes, pisco is starting to catch on in the US. She credits innovative bartenders for not only educating people about pisco, but also putting new spins on a Peruvian classic.

Want to try a pisco sour for yourself? Here's PUNCH's recipe.