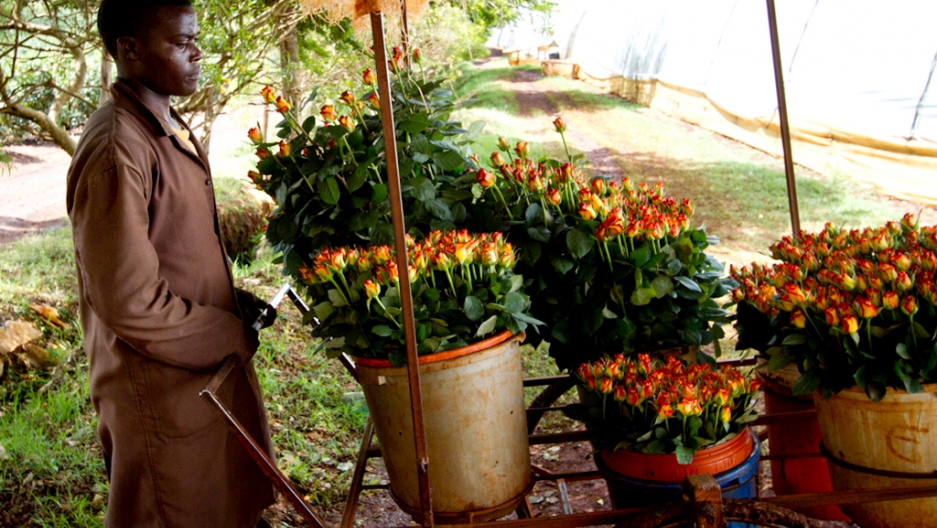 Simbi Roses worker Mogambi Martin, 21, moves buckets full of roses from the greenhouses to the road where they will be picked up for packaging and sale in Europe. Martin, who began working on the farm in October, said this is his first wage-earning job in an part of central Kenya where formal employment is hard to come by.
Credit: Jacob Kushner
Share

THIKA, Kenya — On a bright Tuesday morning in central Kenya, Mark Chirchir paces up and down rows of red and yellow roses. He watches over workers as they seed, plant and water the rose bushes, then clip the stems, strip them of their leaves and bunch them into bouquets for export to Europe and the United States. Production surges around Valentine’s Day and Christmas.

An environmental specialist at the mid-sized flower farm Simbi Roses, Chirchir, 37, remembers an era when workers would sustain injuries on the job — rashes or even eye burns from the spraying of chemical pesticides.

“In the past we used to use very toxic chemicals, but with time we are phasing those out and replacing them with soft chemicals and biological organisms to feed on pests,” he said.

This is one of many improvements in worker protections here in Kenya’s blossoming horticulture sector. Kenya is the world’s fourth largest exporter of cut flowers, employing approximately 100,000 people whose wages directly support an estimated half-million more of their family members.

Workers at Kenyan-owned Enkasiti Flowers, which exports to Europe, reported hazardous chemicals being sprayed while they were still inside the greenhouse. Some who live in company-provided houses located just meters from the greenhouses said fumes from chemical spraying and the burning of sulfur (to enrich the soil) enter their bedrooms as they sleep.

Researchers investigating 15 companies in Kenya’s flower-producing regions found employees are often forced to work overtime without compensation. At one farm employees received only 30 minutes rest during a 15-hour workday.

“Even if we are working for [only] eight hours we are being exploited: We are working eight hours without even a second's rest,” said an employee at a large farm near Thika, who asked his name be withheld to protect him from disciplinary action there. He says many workers at his farm suffer from back problems due to bending over plants all day and arthritis from the tedious work of stripping leaves from stems. Worse, he says his company and others sometimes neglect the wellbeing of workers for that of the flowers.

Apart from the poor working conditions, wages start at or around the outdated minimum wage of 4,000 shillings (about $50 USD) per month. A typical ‘housing allowance,’ a standard benefit in horticulture agreements here, is around 1,800 shillings a month ($23 USD), even though it can cost twice that to rent even a basic, one-room house nearby.

To lobby for better wages and benefits, workers have been joining unions by the thousands. Sixty percent of flower workers now belong to the Kenya Plantation and Agricultural Workers Union (KPAWU), which collects on average 2 percent of worker’s pay as dues to fund its lobbying for collective bargaining agreements. These agreements have led to higher wages for workers, 80 percent of whom now earn more than the minimum wage.

Still, some companies resort to harsh and sometimes illegal tactics to reduce workers’ effective salaries, according to the 2012 survey.

Enkasiti Flowers reportedly fired 20 workers in 2003 after they joined a union, and researchers documented similar dismissals at other nearby farms. GlobalPost tried unsuccessfully to reach Enkasiti by phone and email for comment.

Half of the Kenyan flower workers surveyed said managers at their companies have used summary dismissals as a means to deny benefits to seasoned workers, who earn more due to standard yearly pay raises. One employee at a farm in Naivasha left work during her lunch break to donate blood for a transfusion for her uncle who had been taken to the hospital. She informed her supervisor of her departure before she left, but returned from her break one hour late to work. Nonetheless she was dismissed, despite having worked six years with the company, according to the report.

Sixty percent of Kenya’s flower workers are women, and researchers found that horticulture work has helped women who earned little or nothing as traditional farmers gain stature in Kenyan society as wage earners.

But more than two-thirds of respondents said men and women still do not receive equal pay. Compounding that problem, more than half of flower workers are single parents with an average of three children to support.

Although some farms offer childcare services, they charge an average of 40 shillings (50 cents) per day, which can eat up 5 to 10 percent of a typical workers’ salary, according to the report. And researchers found some on-site daycare centers to be operated under appalling conditions.

“One of the day care facilities visited in Thika area had 20 children of different ages cramped in a room with only one wet bed,” according to the report. “The center had two caregivers who forced children to remain seated on the cold cement floor for hours on end.”

Not all of the challenges plaguing flower workers here are the fault of the companies: Many women surveyed said they were unable to sustain their marriages after they started working on a flower farm because they end up working overtime late into the evening during peak periods that coincide with Western holidays.

In a society that still holds men and women to different marital standards, “my husband will think I’m being unfaithful, as opposed to that I worked late,” explains Nduta Kweheria, Senior Program Officer at the organization that conducted the investigation into Kenya’s flower sector. “And you can’t exactly walk into a flower plantation to verify that your wife is there.”

Perhaps the largest cause for optimism when it comes to improving conditions and pay for Kenya’s flower workers is the myriad local and international organizations that now work to regulate the sector.

“There is improvement across the flower industry as [companies] get certified,” said Chirchir of the Fair Trade-certified Simbi Roses. There, workers start off earning close to Kenya’s minimum wage but receive a 25 percent pay raise by the end of their first two years with the company. When factoring in housing and transportation allowances, the total value of the starting wage and benefits package nearly doubles to about $95 US a month. Simbi Workers get 26 paid vacation days a year; women get three months paid maternity leave and men get two weeks paternity leave.

“It’s a good place, and we are able to sustain our families with the wage we get here,” said Pauline Wanjiku, 30, who has worked at Simbi for four years now. She says that when the company recruits new workers in town, people flock to apply, far more so than they do at other farms.

Assistant manager of Simbi Wilfred Chege, 42, says the flower industry has taken off during his 16 years in the business as farms expand their acreage to grow more flowers and new companies arrive here each year. But he says the problem is that as the supply of flowers has increased, international demand has remained relatively constant, meaning the companies have had to find ways to produce more flowers at a lower cost.

He says Simbi has managed to increase productivity by training workers more thoroughly, which has also allowed them to reduce the number of managers and overseers they employ to correct workers’ mistakes and supervise, saving money.

“With good training, we make them appreciate why they must follow these safety procedures,” Chirchir said. “Because if you just tell them and don’t explain, if it’s a hot day, as soon as the manager leaves they will take off their protective clothes, gloves.”

The cut flower industry remains an unstable one, with demand decreasing sharply whenever the world economy slows. Natural disasters can also wreak havoc: At least 5,000 Kenyans became jobless after a volcano erupted in Iceland in 2010, grounding all flower cargo flights to Europe.