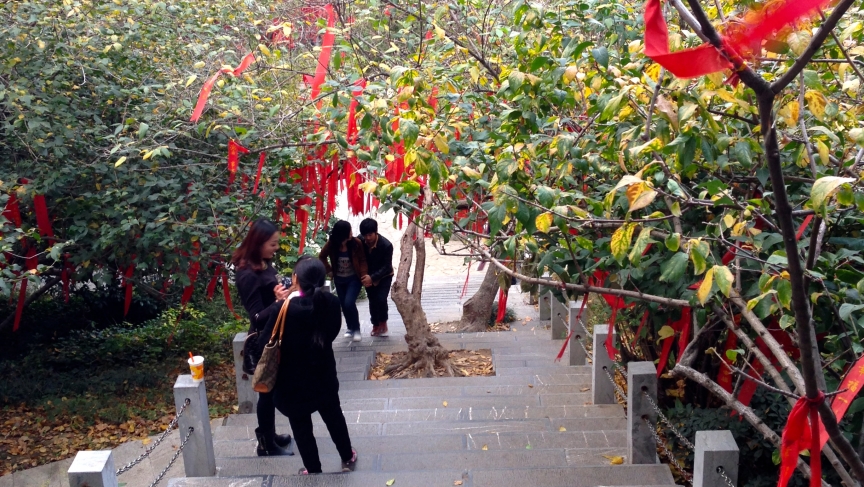 A shrine in Xuanwu Lake park in Nanjing is a popular spot where people submit personal wishes — written on red ribbons — to a higher power.

The park at Xuanwu Lake in the eastern city of Nanjing is an urban oasis. It's a well-known destination for a quiet stroll or a paddle boat ride. And there is one particular spot in the park that's become popular for people in search of some otherworldly assistance.

China is ruled by a Communist Party that believes in no god and no religion, and it gets poor marks from Washington and others when it comes to protecting religious freedom.

But that isn't stopping the Chinese government from publicly embracing certain religious beliefs.

Last month, Chinese president Xi Jinping made a pilgrimage to the hometown of Confucius. Xi declared that the ideas of the sixth-century sage can still play “a positive role in China’s development today.” China's top religious affairs official also recently praised “the eagerness of religious believers.”

Officials in Beijing might just be playing catch up with the public mood in China. Though many Chinese people would never identify themselves as members of an organized religion, polling in recent years shows that much of the public does believe that higher powers of one sort or another are at work on this earthly plane.

The small hilltop shrine in Xuanwu park was built in memory of a third-century Taoist scholar and mystic named Guo Pu, a famous writer and fortune teller whose luck ran out when he failed to impress a Chinese warlord with his predictions.

The warlord had Guo killed. But some 2000 years later, the spot where his clothes are said to be buried is a protected heritage site.

At the top of a stone staircase, interpreter Joyce Zhang and I reached the shrine and we were greeted by a middle-aged gentleman with big glasses, wearing a gray, pajama-like outfit. He said he was from the Shaolin Temple—one of China's best-known monasteries.

Admittedly, I got a little excited. If anyone can explain why Chinese people are coming here to seek a little divine intervention, I thought to myself, this is the guy.

But I was quickly disappointed. This man of the cloth was solely interested in foisting a couple of cheap wooden bracelets on a couple of visitors, and then he quickly scampered off.

“He's a monk?” I asked Zhang, putting her on the spot.

The trees around the shrine to Guo Pu are draped in hundreds of red ribbons. They are a few inches wide and about two feet long. They have messages written on them in black magic marker. This is the reason people visit here.

They buy one of the ribbons on sale nearby for about $3, write a few personal entreaties on it, and then hang it in the trees near the shrine in hopes that forces from the heavens might help these wishes come true.

Some might call it superstition, plain and simple. But some would tell you the activity gets results. 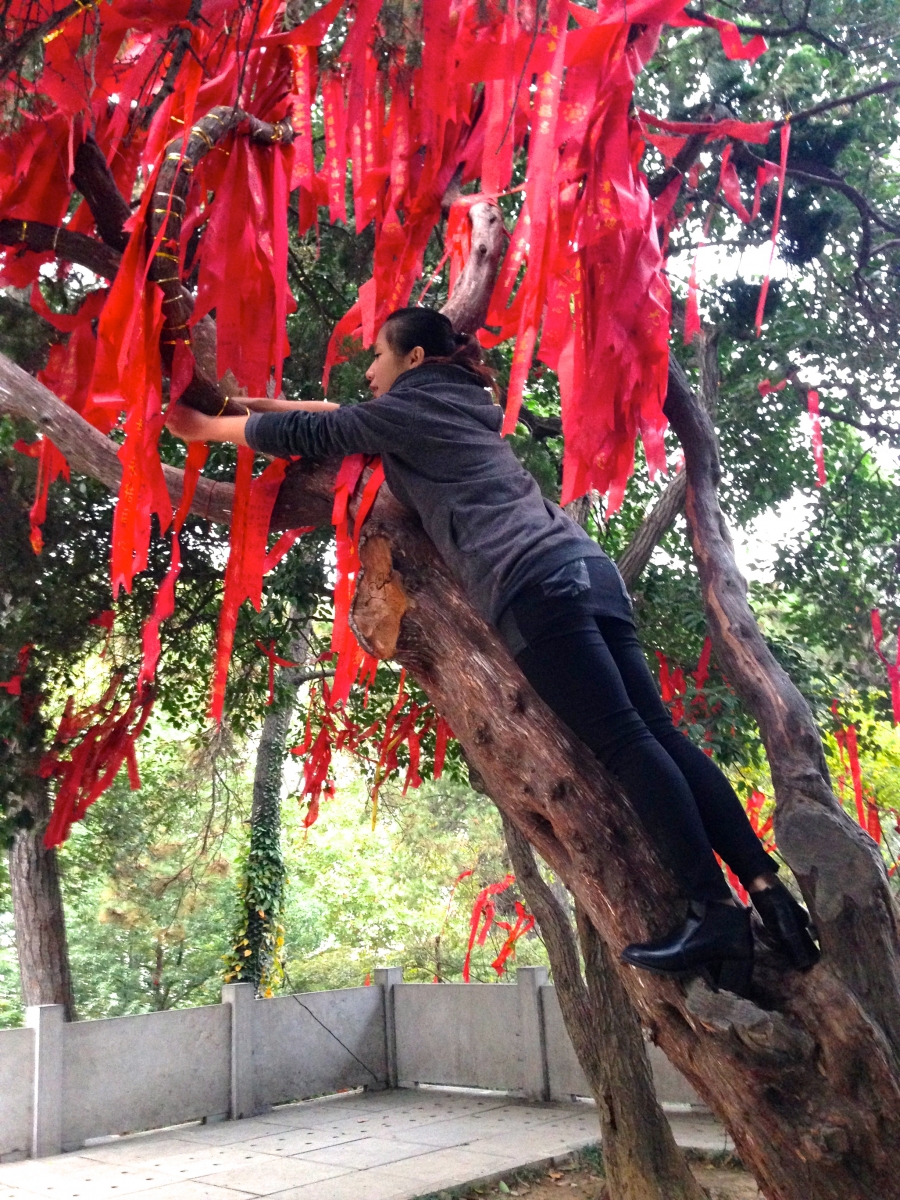 We bumped into Pan Yuen, a 22 year old who works in a shop. She was visiting the shrine for the first time and was with her brother-in-law.

“I just want to come and make a wish,” she told us on her way to pick up a red ribbon for herself. “I heard from my friends that after you hang it here, oftentimes your wishes come true.

“So, I want to try,” she explained with a smile.

Pan wrote two wishes on her ribbon: safety for her parents, and business success for her boyfriend. And it turned out that these are pretty common themes.

Most of the ribbons we looked at included something about parents, about significant others, about health and wealth, in one form or another.

And most of the ribbons are apparently put up by women.

We did, however, notice one put up by a guy in search of a bride. Thoughtfully, he included his phone number on the ribbon.

The act of putting up red ribbon wishes must have grown out of traditional Chinese beliefs that go hand-in-hand with Taoist and Buddhist practices. But Huang Xiao-ying, who was visiting Nanjing from out of town and described herself as a Christian, saw her red ribbon wishes as an extension of her own faith.

The 24-year-old with a bright splash of purple in hair, matching her dress and tights, said she works as a saleswoman for Mary Kay cosmetics.

Huang told me she planned to get married next spring and that her specific wish is for 20 pink cars — driven by her colleagues — to be part of a motorcade on her wedding day.

A pink, private car, she explained, is a symbol of success at her company.

“Seeing that many pink cars driving through my hometown in honor of my wedding,” she said. “Now, that would bring glory to my whole extended family.”