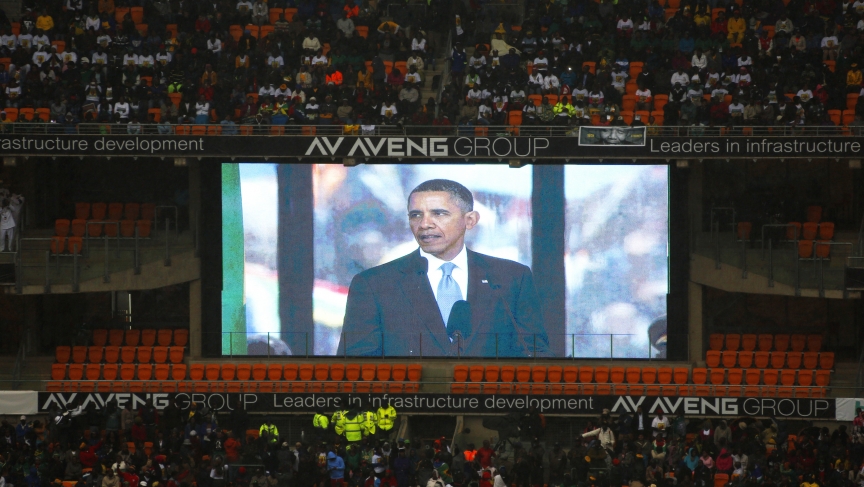 Obama delivered a eulogy for Mandela, also known by his clan name Madiba, during the memorial service. He praised Mandela as a "giant of history" — someone who exemplified the best that is in all of us.

"It took a man like Madiba to free not just the prisoner, but the jailer, as well. To show that you must trust others, so that they trust you. To teach that reconciliation is not a matter of ignoring a cruel past, but a means of confronting it with inclusion and generosity and truth," Obama said.

Pouring rain didn't dampen the enthusiasm of the crowd, which had boisterous cheers for Obama. But the crowd was far more critical of their own leader, South African President Jacob Zuma. Zuma had to call for respect from the podium — respect he didn't seem to get.

Redi Thlabi, host of "702 Talk Radio" in Johannesburg, is a journalist because of Mandela. She says she first wanted to go into journalism when, at age 12, she saw journalists reporting on Mandela's release from prison.

"Today, [South Africans] brought out their deepest emotions to express their love and affection for Nelson Mandela," Thlabi said.

Many South Africans fear their country has lost its moral compass, she said, and has lost the last leader who stood for virtue and magic in the early years of democracy.

The biggest worry, she said, is that South Africans are becoming complacement about corruption — and that the current leaders are forgetting what Mandela stood for. She thinks that is the reason for the harsh welcome that current president, Zuma, received.

"People were just so angry. When you look at Zuma and Nelson Mandela, you can't compare the two. People are just very angry. They've had enough. And they feel there is corruption happening under Zuma's watch, with Zuma himself not being entirely innnocent," Thlabi said.

Thlabi thinks South Africans feel grateful that Mandela held on for so long. Released from prison when he was in his 70s, he lived long enough to be president and more than a decade beyond.

"I feel that we need to do more than just celebrate his legacy. We need to work hard, roll up our sleeves, and build our society," she added.