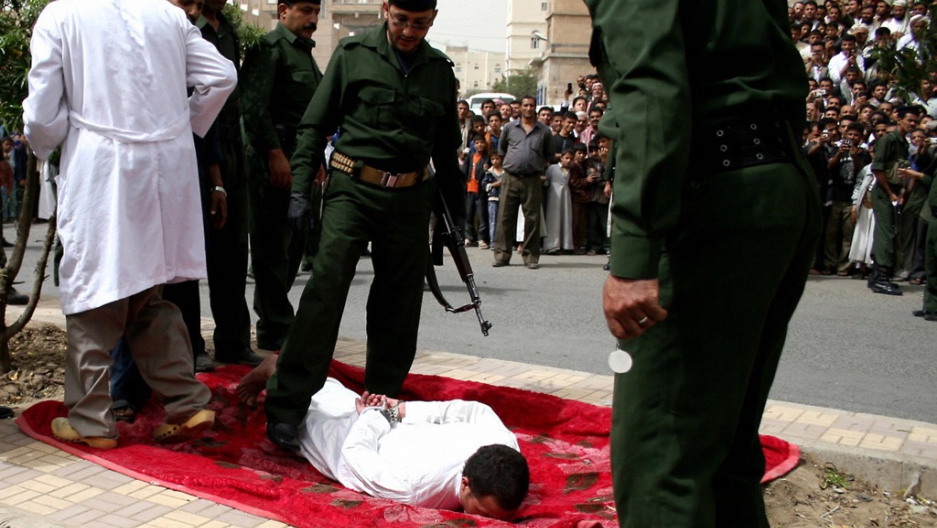 Today is International Human Rights Day. So here in the United States, it’s worth revisiting a debate that nearly every other developed nation has already sorted out: Is it a human right NOT to be legally murdered by your own government?

The United Nations thinks so. In February, UN Secretary-General Ban Ki-moon said, “Capital punishment is inconsistent with the mission of the United Nations to reaffirm faith in fundamental human rights and the dignity and worth of the human person.”

The UN has long pushed for global abolition of capital punishment. Since 2007, the General Assembly has approved four separate resolutions calling on member states to accept an international moratorium. Of the 190-plus member states, about 150 have eliminated the death penalty or no longer practice it. Even Russia has a moratorium that’s been in effect since 1996.

And that leaves the rest — the countries that shoot, hang, lethally inject, and behead people as punishment for their alleged crimes.

Amnesty International documents capital punishment around the globe and publishes its findings in an annual report that ranks the world's states by the number of people they execute annually. The most recent report came out in April and covered the calendar year of 2012. We will have to wait a few months for the new report to tell us all about state murder in 2013. For now, here are the most up-to-date statistics on capital punishment across the globe.

The remains of South African Janice Linden, a woman executed in China after a drug smuggling conviction in 2011 (Getty Images)

Executions are considered state secrets in China, so it’s difficult to estimate statistics. Amnesty doesn’t even try anymore, except to say that the number is in the thousands. NPR reported the number for 2012 at about 3,000. That’s a huge number, but it’s better now than in the 1990s, when China executed an average of 15,000 people per year.

In addition to capital sentences for murder, many of the sentences were for drug trafficking and financial crimes.

Iranian-Kurds protest the execution of Kurdish rebels in Iran, in the northern Iraqi Kurdish city of Arbil, on Oct. 31. (Getty Images)

Executions: 314+ (the “+” indicates that Amnesty suspects the number might be much higher)

Iran is one of several countries that Amnesty singles out for using torture to extract confessions that often lead to execution. Some of these “confessions” are broadcast on state television.

71 percent of the state-acknowledged executions in 2012 were for drug charges. Other non-murder executions were for adultery, sodomy, apostasy, and crimes against the state. Two men received death sentences for third offenses involving drinking alcohol.

The election of President Hassan Rouhani has some in the west hoping for better foreign relations with Iran and for more attention to human rights at home. The latter’s not looking so good. The Iran Human Rights Documentation Center estimates that Iran has so far executed 529 people in 2013. Three hundred of them took place after Rouhani came to power.

Iran’s use of the death penalty attracted global attention of an offbeat sort in October of this year, when a man identified only as “Alireza” survived his prescribed hanging. The Iranian judiciary decided to spare him a second execution attempt.

Another lasting triumph of the US invasion... If civil society means executing people, as it does in the United States, then perhaps we can say “Mission Accomplished” when it comes to Iraq.

Executions in Iraq nearly doubled in 2012 from 2011. This year, as of early November, Iraq has already executed 132 people according to official state-issued numbers. That includes 42 executions over a span of two days in early October.

Like Iran and some other countries on this list, Iraq has a serious torture problem. Amnesty reports that Iraqi interrogators in 2012 beat suspects with cables, suspended them by their arms, burned their faces with cigarettes, and administered electric shocks. Whatever gets the confession. Again, some confessions are televised. And then the confessors are executed.

Saudi Arabia is a close ally of the United States and a fellow fan of capital punishment.

Saudi Arabia’s claim to fame when it comes to capital punishment is that most of its prisoners are executed by public beheading. Amnesty describes one 2012 case in which a Sudanese man was beheaded, his head sewn back onto his body, and then his body hung from a pole.

The Saudi execution of foreign nationals is an especially troubling trend for observers. Twenty-seven of the 79 people executed in 2012 were foreign nationals. Foreign maids are a particularly at-risk group. They are isolated, have few financial or political resources, and remain trapped in massively imbalanced power relationships with their employers. In January, Saudi Arabia beheaded a 24-year-old domestic worker from Sri Lanka named Rizana Nafeek. The charge was for murdering an infant that was under her care. She insisted until her death that the infant had choked to death.

Demonstrators wait as they call for Georgia state officials to halt the scheduled execution of Troy Davis. (Getty Images)

What's there to say? Some lowlights:

Amnesty notes the “discriminatory application” of capital punishment in the United States. As we know, you're more likely to be put to death if you are a person of color and/or poor.

In 2012, the United States was the only country in the Americas to execute prisoners.

Japan and the United States were the only member countries of the G8 to execute prisoners in 2012. And 174 of the 193 member states of the United Nations did not execute a prisoner.

Things look mixed going forward. Only nine states carried out executions in 2012 compared to 13 in 2011. And Connecticut abolished the death penalty, making it the 17th abolitionist state, and the 5th state since 2007.

Still, the United States has executed 36 prisoners so far in 2013, making it unlikely to match last year's total but still killing more than its global share. Most recently killed was Jerry Martin, an inmate sentenced to death for killing a guard while attempting a prison escape in 2007. Martin had been serving a 50-year sentence for attempted murder. He became the 16th prisoner executed this year in the state of Texas.

Yemen, along with Iran, Iraq, and Saudi Arabia accounted for 99 percent of all executions in the Middle East.

Amnesty is especially critical of Yemen for executing prisoners who were juveniles at the time of their crimes. Yemen is a signatory to the Convention of the Rights of the Child and the International Covenant on Civil Political rights, international agreements that say no-one who committed a crime before the age of 18 can be sentenced to death. That hasn’t stopped the country from executing juveniles.

Many defendants have a hard time proving their age. About 80 percent of Yemenis have no birth certificate, and even in cases where a birth certificate was available, prosecutors and judges have ignored the law and imposed the death sentence.

Mary Serezina, 45, a Sudanese death-row inmate sentenced for the killing of a relative (Getty Images)

Sudan has a proclivity for executing political activists, according to Amnesty. It also made news in 2012 when two women were sentenced to death by stoning after having been convicted of adultery. The convictions were eventually overturned and the women were released."

Mugshots of Afghans executed in prison in 2012. (Getty Images)

Afghanistan executed one-third of the prisoners the United States did in 2012. Remarkable, in a way.

Like Iran and Iraq, Afghanistan has a serious torture problem.

Non-murder executions in 2012 were for rape, kidnapping, and treason.

Hamid Karzai’s government was in the news just last week, when a draft revision of Afghanistan’s penal code revealed that stoning would be the official punishment for adultery. After days of global outcry, the justice ministry announced that the sentence had been considered for the code but rejected.

Protesters outside the Gambian embassy in Senegal on Aug. 30, 2012. (Seyllou/Getty Images)

Gambia renewed executions in 2012 for the first time in 27 years after its president, Yahya Jammeh, announced plans in August to execute every one of the country's 47 death-row prisoners by mid-September.

Soon after, nine prisoners were executed by firing squad on the same day, in secret. Authorities didn't notify families. They didn't return the bodies. They didn't even reveal where the bodies were buried. The location remains unknown.

Global condemnation was swift. President Jammeh reinstated the moratorium on capital punishment before executing any of the remaining death-row prisoners.

An execution room at the Tokyo detention house in Tokyo, 2010. (Jiji Press/Getty Images)

Like Gambia, Japan carried out death sentences in 2012 after a period of hiatus. Japan's break was just 20 months, but it was enough to stir hopes that the country was shifting away from capital punishment.

That was until Japan hanged three men convicted of multiple murders. Since then, the country has executed 13 more people, and Amnesty is concerned about the escalation.

So, curious where your country stands?

Countries with no death penalty

Countries with the death penalty