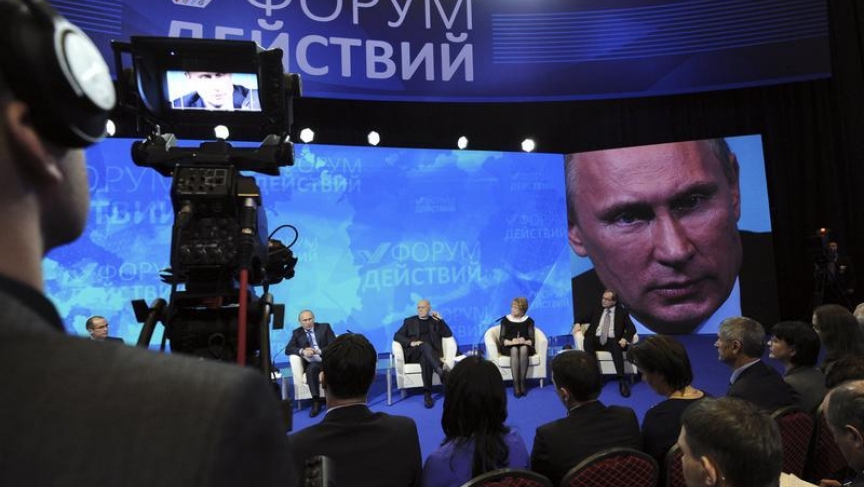 Russian President Vladimir Putin, second from left in the back, answers a question during a meeting with members of the All-Russian People's Front group in Moscow December 5, 2013.

He said it would be replaced by a new media organisation called "Rossiya Segodnya," or Russia Today.

Critics say this is a move by Putin to tighten his grip on Russian media. That's because state-run RIA Novosti was considered a moderate voice in the Russian media landscape, relatively speaking.

Marc Bennetts, an author and journalist based in Moscow, wrote the upcoming book "Kicking The Kremlin" about Russia's protest movement and Vladimir Putin's crackdown on dissent. He worked for RIA Novosti from December, 2011, until this past May.

"It was a good place to work," he says, recounting the reporting trips he had to Iran, North Korea and Chechnya. He says those places would have been more challenging to go to if he had been working for a Western news outlet.

Even though the Kremlin funded RIA Novosti, Bennetts says he didn't feel any pressure to follow the government's line of thinking, making his experience "surreal" sometimes.

For example, once when there was a protest against the government, he wrote this first sentence for his report: "Tens of thousands of people march through the centre of Moscow chanting Putin is a thief." Then at the end of the week, he picked up his Kremlin paycheck.

"Medvedev was attempting to liberalize or, as he called it, modernize Russia, and part of this was a revamp on the RIA Novosti," Bennetts says.

The agency began to hire journalists with experience at major foreign news outlets, such as The New York Times, the BBC and The Guardian. Bennetts says if there was pressure to follow the Kremlin's line on reporting, none of these reporters would have continued to work there.

But that was what irritated a lot of people in the Kremlin, namely, Putin supporters.

So now RIA Novosti will be morphed into a new media outlet called Russia Today. The person who will be heading it, Dimitry Kiselyov, is a defender of hardline Putin policies, like Russia's law against so-called "gay propaganda."

"He has been a vocal supporter of the anti-gay law," Bennetts says. "He was on national television and he said that gays who die in accidents should have their bodies burned so as not to infect the rest of the nation if parts of their bodies were used in organ transplants."

He says no one yet knows what the future looks like for the new media agency, but the appointment of Kiselyov suggests "darkness is spreading over Russia, as it has been for some time."