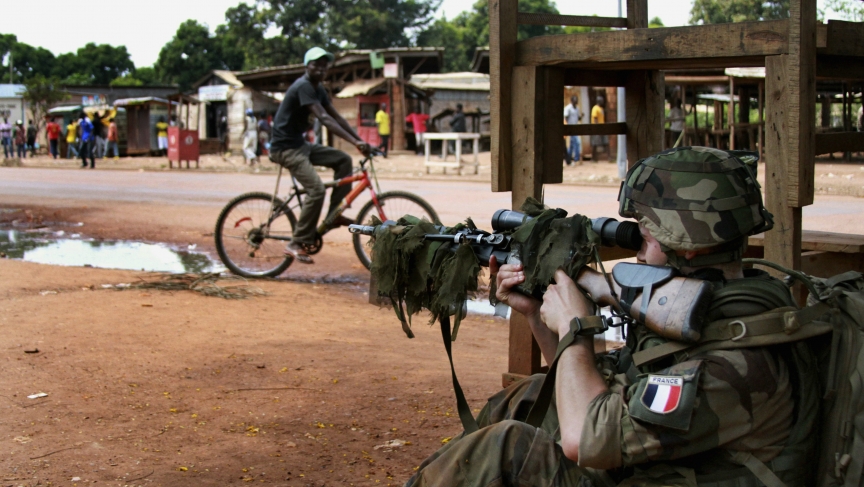 A French military sniper readies his rifle in Bangui.

A French effort to restore stability in the Central African Republic — a troubled former colony — is coming under fire.

Just days after 1,600 French soldiers arrived in the CAR to try to stop the fighting, two of the paratroopers are dead. Journalist Eliza Griswold calls it a significant escalation.

"When we see Western troops targeted, and a willingness for that to happen, it definitely changes the stakes of a local conflict," Griswold says.

Griswold says what looks like a clash between Christians and Muslims in the Central African Republic is actually a far deeper struggle over the political future of certain territories rich in diamonds, gold and uranium.

"The fighting itself isn't about religion. It's about control over political power and safeguarding communities," Griswold says. "And it's taking on the color of religion because no other form of identity is protecting the people of CAR now."

Griswold wrote "The Tenth Parallel: Dispatches from the Fault Line Between Christianity and Islam." She says, in the absence of functioning governments, many Africans are increasingly defining themselves in terms of their religious identity.

"If it doesn't make any difference to be a citizen of the Central African Republic, what are you going to turn to?" Griswold asks.

The Red Cross reports that at least 465 people have died in the fighting in the CAR — just since last Thursday.