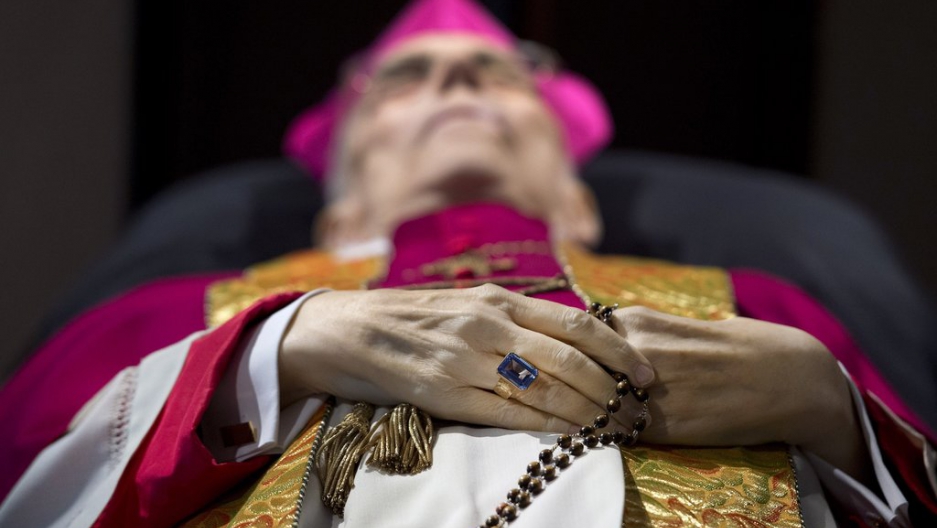 The body of Dutch former Roman Catholic bishop of Roermond and of the Diocese of Reykjavik, Jo Gijsen, placed up on a bier in a monastery in Sittard on June 26, 2013. Gijsen died on June 24, aged 80.
Credit: Marcel Van Hoorn
Share

News that the Vatican will create a commission to address its  global sex abuse crisis comes 11 years after American bishops, amid devastating media coverage from the Boston scandal, met for their summer conference in Dallas, trailed by 700 journalists.

With help from RF Binder, a Madison Avenue public relations firm specializing in damage control, the US Conference of Catholic Bishops by parliamentary vote enacted a youth protection charter, predicated on "zero tolerance."

They also announced the formation of a National Review Board of 12 blue-ribbon Catholics to research the crisis and offer an agenda for resolution.

The Review Board spent 18 months interviewing bishops, therapists, theologians, victim advocates, clinicians working with perpetrators and journalists including myself for the final report.

The report called for transparency and oversight of bishops to halt the practice of concealing and recycling sex offenders.

But as Justice Burke told GlobalPost, “The bishops did not follow our recommendations. They set up barriers for our work from the very beginning.”

Barriers like Cardinal Francis George of Chicago, who after celebrating Mass for the group, fumed at them over coffee and donuts, “You will be the downfall of the church!”

The board members were stunned. Cardinal George's press spokesman later denied saying what a roomful of people heard him say.

George went on to flout the youth protection charter by failing to act on accusations against Fr. Daniel McCormack. In 2007 McCormack pleaded guilty to abusing five children and began a five-year prison term.  The archdiocese has settled victim claims of $15.8 million in 2008, with another case settled for $2.3 million last month.

And the fallout for Cardinal George?

The bishops elected him their conference president in 2008.

Nevertheless, warts and all, the youth protection charter has positioned many bishops to put "safe touch" educational programs in place for diocesan schools and youth programs. Most bishops would never dream of recycling a known child offender. Many bishops face a minefield of issues in deciding where to put known offenders who no longer have ministerial functions but rely on the church for living expenses.

Even David Clohessy, the director of SNAP, has swung around to supporting the idea of remotely located communities where clergy offenders live out of reach of children, almost like religious penal houses.

“I have not seen who [the Vatican] advisors are,” Burke said of the latest news. “They have a pool of outstanding Catholics from around the world who could help and advise them. But they need an organization where lay people have equal status — and qualifications for delivering systemic change.”

“I’d like to see Pope Francis appoint people like Judge Yvonne Murphy of Ireland on that commission,” said Burke.

The Murphy Report tapped an extraordinary government investigation of the Dublin Archdiocese. In the ensuing fallout, Irish Prime Minister Enda Kenny reacted to Vatican stonewalling on the issue in 2011 by closing Ireland's diplomatic embassy to the Holy See.

“I would hope that the Vatican would conduct due diligence and read those reports [by the Irish government on the abuse crisis], interview victims and psychologists and other board members who did the investigative work, and get information from them,” said the justice, who lives in Chicago.

A Vatican source close to the cardinals told GlobalPost that two initial approaches are underway.

Francis has urged a training program to protect children, suitable for diocesan education, particularly in Third World countries without legal remedies as in prosecutions and lawsuits.

The second approach, still forming, is an oversight body, probably at Congregation for Bishops, to deal with complaints on negligence or abusive behavior by bishops.

This would track the tribunal process Cardinal Joseph Ratzinger established in 2002 at Congregation for the Doctrine of the Faith. Canon lawyers read files on accused perpetrators, the dossiers sent by bishops, mostly from Western countries, with forensic findings from civil cases or prosecutions of priests sitting in prisons.

Approximately 1,000 priests have been laicized.

When the 2004 review board issued its report, Bennett emphasized in interviews that the bishops must engage in “fraternal correction.” Not everyone on the board agreed.

“These dioceses are separate fiefdoms,” Leon Panetta told me for a National Catholic Reporter article in 2004.

“It’s an almost medieval organization we’re dealing with,” said Panetta. “Each bishop runs his own fiefdom. There is very little communication between those dioceses and bishops and indeed, very little communication between bishops and the Vatican. The basic culture that developed is, ‘We take care of our own, we really don’t want to open ourselves up to being questioned by others’...The key here is going to be whether there is greater participation by the laity.”

Nine years later, Justice Burke is suggesting a dose of democratic procedure for the fiefdoms.

“They have to set up worldwide rules for bishops’ conduct,” she told GlobalPost. “There is a structure here. The metropolitan [archbishop] stands over a given region, but they need rules that he and his bishops have to abide by. They need to know that if don’t abide by them, there is a penalty.”

But in the best-case approach thus far, the American bishops’ youth protection charter has no enforcement teeth for dealing with bishops, like George of Chicago, whose failure to remove a credibly-accused priest caused more children to be abused, and cost his archdiocese millions.

Or Bishop Robert Finn of Kansas City, who was convicted of a criminal misdemeanor for concealing information on a child abuser.

“Catholics in the pews need to know what the rules are, so they can inform the metropolitan” in such cases, if Pope Francis moves in that direction, Burke said. “Whether it’s in the Vatican [at Congregation for Bishops] or geographically applied, the same rules and mandate have to be in the open.”

“Until they accept the fact that criminal conduct like this exists [among bishops], they cannot do anything transparently. They cannot any longer stand on confidentiality.”