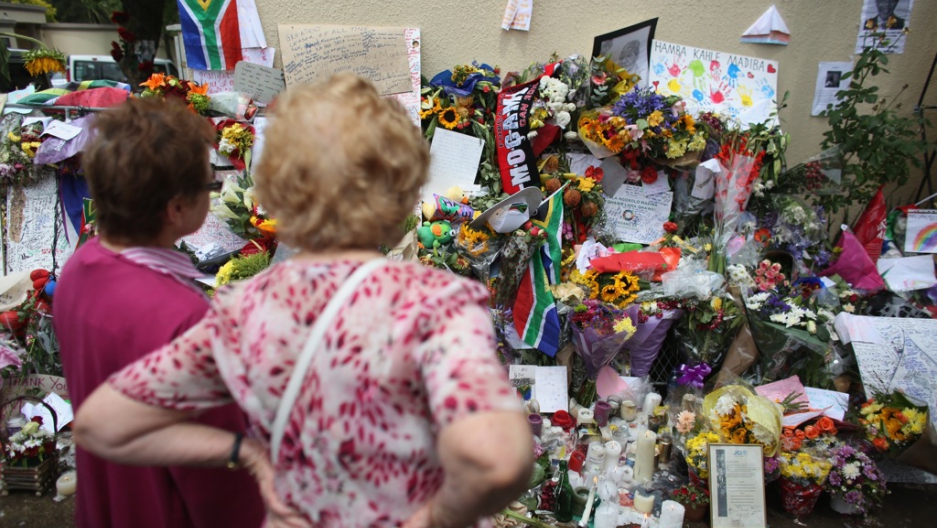 “How long will this take?” asks a middle-aged white man, friendly at first until he is asked for his thoughts about Mandela. Just two minutes, sir. “That’s too long,” he snaps, walking away.

Another man, dressed in a khaki work shirt and matching shorts — the de facto Afrikaner uniform — rushes off with a hasty “Oh, no thank you.” Yet another Afrikaner refuses to share his thoughts about Mandela, explaining: “I’m unemployed right now. He’s done nothing for me. I’ve got a negative point of view.”

This town of 10,000 people is just 50 miles southwest of Johannesburg, amid the grasslands and gold mines of the old Transvaal. But as in many areas outside South Africa’s cosmopolitan big cities, there have been no spontaneous street gatherings to celebrate Mandela’s life, and few signs that the nation’s first democratically elected leader has died.

While Mandela is so revered around the world that more than 70 heads of state and government have travelled to South Africa for his memorial service Tuesday, feelings among the Afrikaner community are complicated and at times laden with fear.

More from GlobalPost: Full coverage of the death of Nelson Mandela

Mandela won the hearts of many Afrikaners — white descendants of Dutch and French Hugenot settlers — after he was released from prison in 1990. While at Robben Island he learned Afrikaans, their language, and made friends with his white prison guards.

As president, determined to forge racial reconciliation in South Africa, he hired Afrikaner staff, embraced rugby and even invited one of the prosecutors who had him imprisoned, Percy Yutar, to lunch.

Marten Coetzee, 40, a mining technician who lives in Fochville, said simply that his “heart is sore” over Mandela’s death.

“He was a great leader,” Coetzee said. “He saved our country from apartheid.”

Walter Eriksen, a 25-year-old accountant, believes Mandela was a good president — he didn’t try to take revenge against his former oppressors — but that some aspects of his struggle history are overlooked.

“He did a lot of positive stuff, but he was still a terrorist,” Eriksen said.

Among Afrikaners, rumors have persisted that after Mandela dies there will be retaliation against the country’s 9 percent white minority, a “night of the long knives.”

A similar myth circulated ahead of the 1994 election that would make Mandela president, during which time some white South Africans stockpiled canned food, built bunkers and prepared for the worst — which never came.

Belinda Van Rhyn, 45, an office worker at a home security firm, said she has heard the rumors that whites will be targeted, and noticed a fresh round of fearmongering on Facebook in the days since Mandela died.

“You know, I don’t believe that,” she said. “I think that’s nonsense.”

“I think he’s done only good for the people,” Van Rhyn said. “He put us together as a rainbow nation. From 1994, I don’t think people see color anymore.”

“When in prison people worried because they thought he was a terrorist, he planted bombs and things. But you can’t judge a book by its cover,” she added.

Thys Redelinghuys, 66, a retiree, said he has joined in prayers for Mandela and his grieving family during services at the local Dutch Reformed Church.

But not all residents of the town were sad when Mandela died, he said, pointing to a right-wing, conservative element, which he estimates at about 10 percent of the population.

Redelinghuys explained the apartheid system as a form of brainwashing.

“The thing that we did was wrong, and when [Mandela] came out he made us all free. That is the truth,” he said.

Like other Afrikaners, Redelinghuys said that while Mandela was a good leader, he in no way supports his party, the African National Congress, which is still in power.

“He was one of the biggest leaders we ever had,” he said. “There’s no leaders at the moment, not on the black side.”