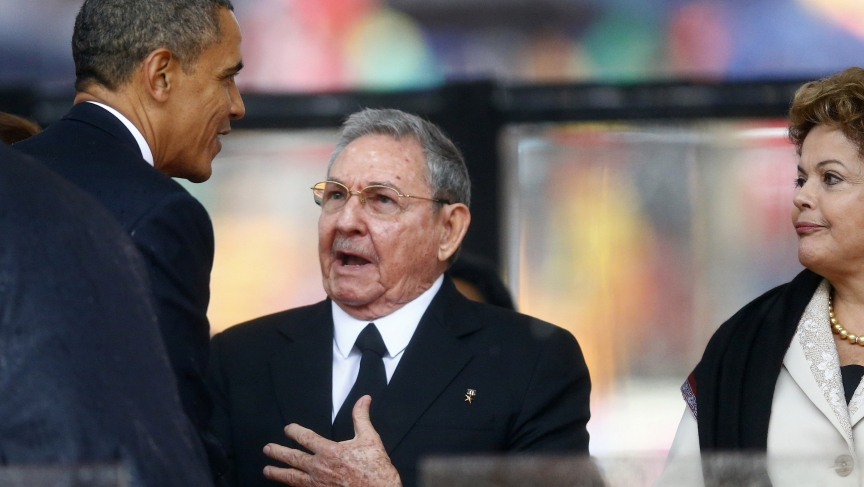 Nelson Mandela was the spotlight as world leaders and common people gathered in South Africa to remember him. But a handshake has gotten nearly as much attention around the world today.

US President Barack Obama shook hands with world leaders on his way to the podium to speak at Mandela's memorial service. On his way, he shook hands with Raul Castro, the president of Cuba. The last time leaders of these two adversaries shook hands was in 2000, when Bill Clinton and Fidel Castro attended a meeting at the United Nations in New York.

Then, no photo was distributed; no policy change occurred.

This time around, though, "it made me alert to the prospect that the two presidents might actually change history," said Julia Sweig, director of Latin American studies at the Council on Foreign Relations. "My other thought was, this could be a big nothing, and I hope I'm wrong."

Normally these types of face-to-face encounters are carefully choreographed to avoid uncomfortable, and unintended, moments. But, said Sweig, "how could the [US] President walk past Raul Castro and NOT greet [him] properly? So I think there was some thought given to it."

A white house official today insisted that Obama's handshake with Raul Castro had not been planned in advance, and was just a simple exchange of greetings.

Yet, Sweig said, Obama had been floating some "test balloons" a few weeks ago in Miami, when he commented on the "need to update Cuban politics. And there was no big backlash. So, I think, this is yet another test balloon aimed at socializing the American people to that prospect," she said.

"President Obama has been getting the message from Latin America that a significant and positive legacy with the region runs through his choice on Cuba policy. And I think in terms of domestic politics in the United States, since he won the Cuban vote by 50 percent in 2012 in Florida, politics are changing. But this isn't the beginning of something, rather part of a process already underway."

"[Obama] didn't have a choice. This is Nelson Mandela's memorial and each of these presidents, in their statements, attempted to demonstrate how Mandela's legacy is relevant to their own country's history. It would have been an affront to Mandela for Obama not to do as he did on the podium today."