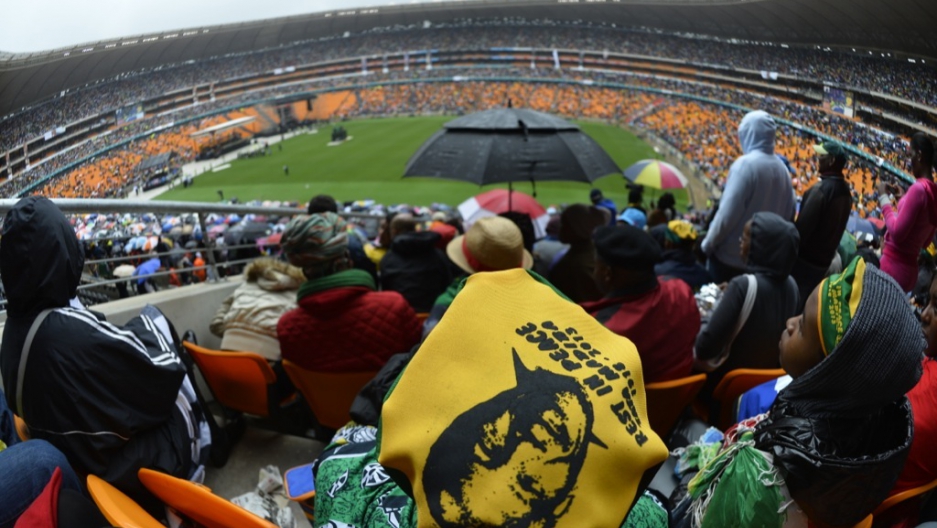 Tens of thousands of South Africans, who waited for hours in the mist and rain, buoyed by songs from the struggle days. Kings and queens, actors and musicians. Barack Obama and some 100 other world leaders, everyone from Raul Castro to Robert Mugabe.

All came to this cavernous stadium in Soweto, the once segregated black township near Johannesburg, to pay tribute to the man Obama called a “giant of history,” a man whose fight against racist white rule inspired the world.

But it wasn’t the memorial service many had expected.

Maybe it was the unseasonably cool and rainy weather, or the fact that Tuesday hadn’t been declared a national holiday, but the stadium remained a third empty, with rows of glaringly vacant orange seats. This was despite the South African government’s fears of stampedes if mourners were turned away from the 95,000-seat arena, known as the “calabash” for its shape resembling a giant African cooking pot.

The loud crowd and the lousy sound system made it hard for those in the stadium to hear the emotional tributes paid by Mandela’s friends, grandchildren and foreign dignitaries including UN Secretary-General Ban Ki-moon and African Union chair Nkosazana Dlamini-Zuma.

And then there was the booing.

Jacob Zuma, the South African president, was booed repeatedly by the rowdy crowd despite cheers for virtually every other dignitary shown on the stadium’s jumbotron — including for F.W. de Klerk, the last apartheid-era president.

Some of the biggest cheers were for Mandela’s widow Graca Machel and ex-wife Winnie Madikizela-Mandela, both wearing black in their first public appearances since his death.

Obama was one of the few speakers who managed to cut through the din. He drew widespread praise for his stirring tribute, in which he thanked South Africa for sharing their "Madiba" with the world.

“Nelson Mandela reminds us that it always seems impossible until it is done,” the US president said. “South Africa shows that is true. South Africa shows we can change, that we can choose a world defined not by our differences, but by our common hopes.”

The stadium was dotted with celebrities including Bono, Oprah Winfrey, Charlize Theron and Naomi Campbell. Former US Presidents Bill Clinton and George W. Bush were also sighted watching intently from the stands.

Leaders from the BRICS group of emerging economies — including Brazil, India and China, but not Russia — were among the few foreign officials allowed to speak.

Cyril Ramaphosa, the African National Congress deputy president and a host of the memorial service, told the crowd that the gray skies were a blessing. In South African culture, “if it rains when you are buried it means the gods are welcoming you and the gates of heaven are opening,” he said.

School principal Florence Kganye awoke at 4 a.m. to reach the stadium from her home in Kempton Park, east of Johannesburg, explaining that “raining or not, I’m there. I can’t miss it.”

Now 55, she was a teenage revolutionary during the Soweto uprising of 1976, which came after black children were killed protesting against forced Afrikaans-language instruction in schools, a key moment in the anti-apartheid struggle.

Kganye said she was arrested and badly beaten after an informer ratted to the police in her hometown of Mangaung, in South Africa’s Free State, about plans to bomb a school.

“Even today when I have back pain I think of that day,” she said. “It was terrible the way we were treated.”

Her friend Monica Buthelezi, 52, said the memorial service for Mandela was “history in the making.”

“It’s kind of symbolizing the end of an era,” she said. “This was a beautiful time that Mandela gave us.”

Official memorial events will continue through the week, with Mandela’s body lying in state at the Union Buildings in Pretoria from Wednesday until Friday.

He will be buried in his boyhood village of Qunu, in the remote Eastern Cape, on Sunday in a family ceremony that few foreign dignitaries are expected to attend.

More from GlobalPost: Why did Israel snub Mandela?

As mourners left the stadium and packed into trains and buses for the ride home, much of the discussion was about the booing of Zuma. During the service he was jeered by the crowd every time his face appeared on the big screen, and appeared increasingly uncomfortable with the unexpected negative reaction.

Lerato Ngobeni, 30, said the boos were “a form of complaint,” with many South Africans angry over issues including government corruption and public money spent on the president’s private residence in Nkandla, his home village.

“It was quite embarrassing for him as a leader,” Ngobeni said, adding that it sends a message to the African National Congress party ahead of elections next year.

Ngobeni's fiancé Ben Mapoane, 40, said he didn’t think the crowd’s treatment of Zuma detracted from the focus on Mandela.

“A lot of people are unhappy about the Nkandla [presidential compound] project — the public money spent, the selfishness,” he said. “These are not the values that the late Madiba believed in.”