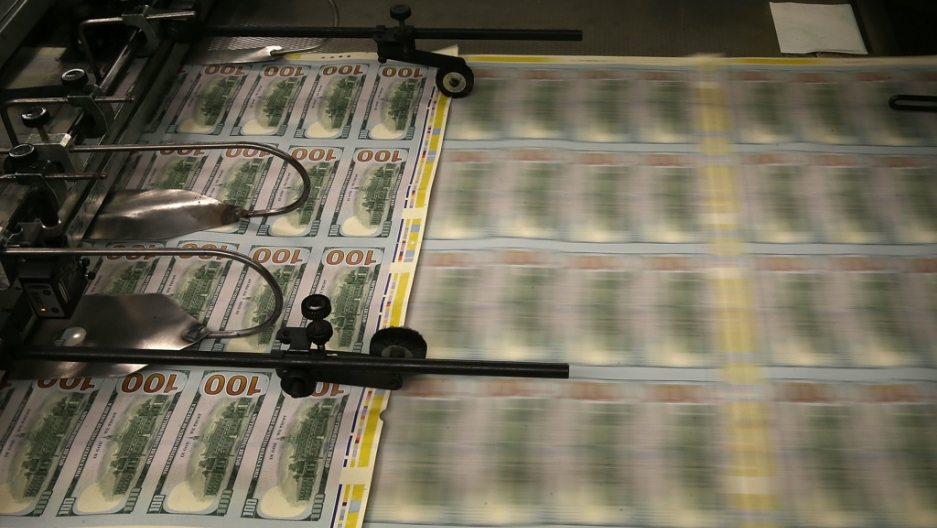 New $100 bills are printed at the Bureau of Engraving and Printing.
Credit: Mark Wilson
Share

NEW YORK — How quaint it all seems today: Back in early 2009, as the global economy teetered on the brink of disaster, we offered up a guide to the jargon of those gloomy days, defining such concepts as CDOs (collateralized debt obligations), SIVs (structured investment vehicles), and that now-familiar epithet, TARP.

A second installment, as the euro zone slipped toward a very different abyss, explained (to the extent this is humanly possible) PIIGS (Portugal, Ireland, Italy, Greece and Spain — the region’s fiscal cripples), too big to fail, and QE — quantitative easing, which is central banker talk for printing money.

QE, in fact, is widely credited for preventing the Great Recession from becoming a second Great Depression. For roughly five years now, the US Federal Reserve Bank has maintained a policy of “easy money” (i.e. hyper-low interest rates) and pumped this credit-producing currency into the world economy at the rate of $85 billion a month.

Put more simply, of late the Fed has created $85 billion in new US Treasury bonds every month and added them to its own balance sheet.

The central banks of the European Union, Britain, Japan and others have engaged in similar policies.

But all good things someday must end. Even though QE has produced not a hint of the inflation that panicky right-wing economists predicted, the Fed always intended to pull back on QE once certain economic indicators (manufacturing, GDP growth, and most of all, unemployment) improved.

The Fed has, in effect, been doing what Congress would not do: ensuring that growth continued as the country deleveraged itself from the spending and borrowing spree of the pre-crisis bubble years.

That time appears to be nigh, and from that fact flows our first term of art: Tapering.

In the financial context, tapering is the gradual (or not so gradual) slowing of QE — in effect, turning the spigot on the Fed’s monetary fire hose until, eventually, the Fed is no longer pumping billions into the economy.

But as the economy has improved, the guidance is less and less forward looking. In fact, Bernanke’s suggestion last summer that the Fed may start tapering early led to a mini-crisis in many emerging market nations, as the prospect of more attractive yields on US Treasury bonds led the value of their currencies to tumble.

Every good bit of economic news since then, including Friday’s Labor Department report lowering the jobless rate to 7 percent for the first time since 2009, raises more concern abroad that tapering may occur sooner than expected.

So the Fed has tiptoed toward tapering. But it will happen, and when it does, some other useful terms will come to light.

Foreign exchange controls, or currency controls, will be the tool many emerging economies resort to when tapering becomes a reality. These are regulations meant to prevent hard currency from flowing out of a country because of a quick drop in the value of the local currency, or due to a sudden change in interest rates.

Because the Fed’s super low rates have allowed big banks to borrow at almost nothing, it’s been very lucrative for those banks to use money borrowed at 1 percent to purchase government bonds in emerging nations (Brazil, say, or Turkey), where they will earn 8 to 10 percent interest. That’s a huge profit for doing essentially nothing.

So QE fueled this so-called carry trade over the past five years, inflating emerging market currencies and growth rates. Tapering is likely to bring the carry trade to a screeching halt and send a lot of money flowing back into US Treasury bonds, whose rates should rise and become more attractive.

To prevent a collapse in emerging economies, these nations may slap in place foreign exchange controls, as many did last summer during the tapering mini-panic. These can take the form of punitive taxes or outright bans aimed at making large withdrawals either illegal or prohibitively expensive. These financial cofferdams may prevent some money from leaving, but if the tapering is not handled delicately, markets could panic, sending emerging market economies around the world into recession and dragging the US and other developed economies with them.

If all of this sounds like it’s a long way from the real estate and credit bubbles that led to the collapse of Lehman Brothers in 2009, don’t worry: The fallout from that crisis, too, bubbles right along.

Indeed, this week, the main US financial regulatory bodies on Tuesday approved the Volcker Rule, named for former Fed Chairman Paul Volcker, in an effort to stop huge banks from taking equally huge risks just because they think the US government has to bail them out if those risks fail.

This may be the most important, most controversial and least understood reform to grow out of the 2008-2009 crisis. Big investment banks have already shut down “proprietary trading desks,” through which they were placing huge speculative bets with their US government-insured assets. Dodd Frank reforms made that illegal.

But principle trading — where banks use their capital to buy and sell stocks and bonds in partnership with their clients — has also emerged as a potential threat to the economy if the risks — again, underwritten by the implicit idea that Uncle Sam will bail them out — are too large.

The "London whale" whereby JPMorgan Chase lost over $6 billion in a single such trade in 2012 (and recently paid a fine to US and UK regulators of $920 million) is a case in point.

So the reform continues apace. But if you think that means it’s safe to go into the water, consider this one last piece of jargon — not a new one, but rather a blast from the recent past: synthetic collateralized debt obligations (SCDO). An SCDO is basically a way to purchase securities with very little cash and instead using insurance and other derivatives as collateral.

As the Financial Times reported this week, Citigroup has recently advertised jobs for analysts who specialize in this exotic financial vehicle that was at the center of the 2009 crisis. This is not your father’s mortgage-backed security — mind you: These new beasts are a bit more transparent, and none of them includes the kind of super low-grade subprime mortgages that nearly destroyed capitalism.

But as a wise man once told me: “Michael, the canneries are not built for the benefit of the sardines.”

Leaking like a SIV or too big to fail?