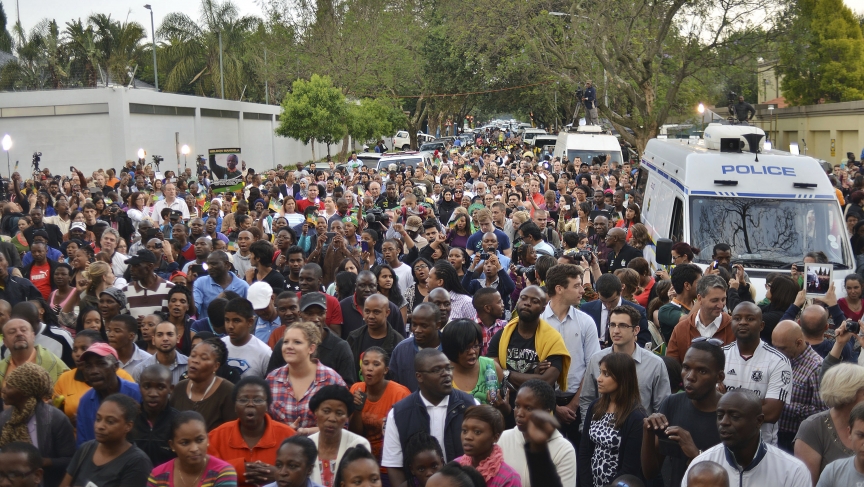 People gathered at Nelson Mandela's home outside of Johannesburg on December 6, 2013.

American author and journalist Adam Hochschild happened to be in South Africa during the summer of 1962, the year that Nelson Mandela was arrested and began his 27 years in prison.

Mandela had already established himself as a symbol of anti-apartheid resistance. Hochschild was a 19-year-old college student, writing for an anti-apartheid newspaper in Cape Town.

"I remember the screaming headlines in the newspaper when [Mandela] was arrested," Hochschild says. But at the paper Hochschild was working for, as with other South African newspapers, publishing details or photos about Nelson Mandela was banned.

"There was very much a sense of oncoming night," Hochschild recalls about that time in South Africa's modern history. "It was like being in Germany in the 1930s."

"People knew that South Africa was entering a long, dark period," he says. "What we know now, and didn't know then, was that it was an American diplomat who tipped off the police to the route that his car was going to be taking."

"They probably would have arrested [Mandela] within the next few weeks anyway, but it's regretable that it was an American who contributed to his being arrested at that time and place."

Hochschild returned to South Africa again and again to report and write about the country. His 1990 book, "The Mirror at Midnight: A South African Journey," weaves together the historic account of a 19th century battle between white settlers and Zulus with realities of life in apartheid South Africa during the late 1980s.

Hochschild's predictions about the prospects for meaningful or swift political reforms at that time were not rosy.

"I — like almost everyone else — felt this was a system that was in place for a long time to come," he said. "You just could not imagine how anyone could succeed in overthrowing this government [in 1988]."

Hochschild recalls that South African security forces patrolled the black townships, there were lots of police on the street, South Africa had the most powerful military in Africa and it had the atomic bomb. The writer honestly thought it would be decades before the country would see real change.

"But then, events happily took us all by surprise."

Hochschild returned to South Africa to write for the Village Voice after Mandela was released from prison. And he followed Mandela as he campaigned for president on one day in 1994 .

"He looked very spry," Hochschild said. "He was 75 at the time. He had hearing aids in both ears. But there was still a kind of a majesty about him."

Hochschild said the crowds were enthusiastic about Mandela's candidacy, even if he didn't always tell them what they wanted to hear. At one point, Hochschild said Mandela admonished his supporters not to harrass the candidate's longtime rival and chief oponent on the campaign trail, FW de Klerk.

"The audience clapped politely, but it was sort of more polite than enthusiastic," Hochschild says. "He was not a great speaker."

But Mandela did have a gift for using humor on the stump.

The future president explained some of the basics about voting, for audiences that would be enjoying the privilege for the very first time. Because many black South Africans could not read, the ballots during that election would have a picture of each candidate's face on them.

"'So, when you vote,'" Hochschild remembered Mandela saying, "'look for the handsome face!' And he pointed a finger at his own face, and everybody roared with laughter."