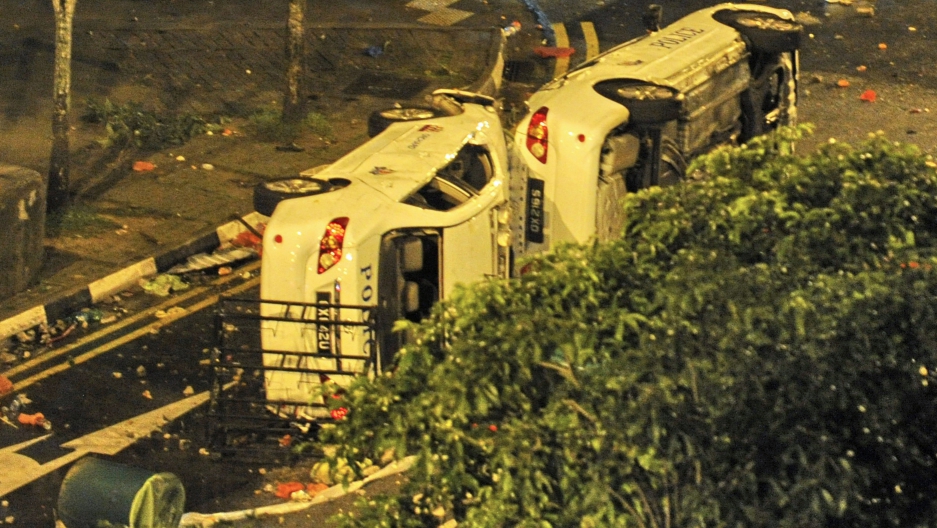 Two police cars flipped to their sides remain in the street after a riot broke out in Singapore, in the early hours of December 9, 2013. A riot broke out among South Asian workers in Singapore late in the night of December 8, damaging police cars and other vehicles in the city state's Little India district, eyewitnesses and local media said. The rare outbreak of public disorder in strictly controlled Singapore took place in an area normally packed with thousands of workers, mostly from the Indian subcontinent, on their day off. The cause of the incident was not immediately clear and the situation was brought under control within two hours, people on the scene told AFP.
Credit: ROSLAN RAHMAN
Share

A Sunday riot in Singapore sparked by a bus accident saw at least 18 people injured and 27 arrested, in the worst outbreak of civil violence in the city state in 40 years.

The incident reportedly began after a private bus hit and killed a 33-year-old foreign worker in the Little India district of Singapore, enraging passerby, wrote Reuters.

The angry crowd set fire to vehicles and smashed the windscreen of a bus. Footage from the scene showed toppled police cars, and at least 18 people were injured in the ensuing conflict, wrote ABC Australia, mostly police officers.

Twenty-seven were arrested in conjunction with the riot, and they are unikely to get off lightly. The suspects may face as many as seven years in prison, and could also be subject to caning, a corporal punishment.

"This is a serious incident which has resulted in injuries and damage to public property," said Teo Chee Hean, Deputy Prime Minister and Minister of Home Affairs, according to Reuters. "Police will spare no efforts to apprehend the subjects involved in the riot."