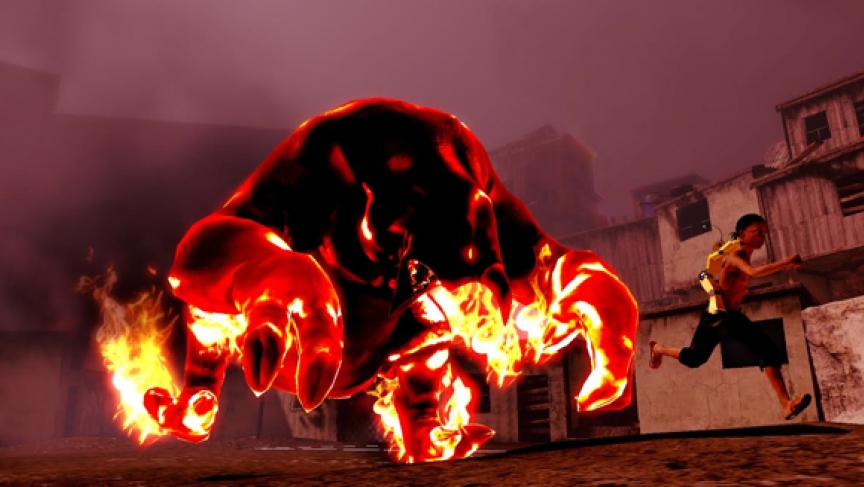 An image from Vander Caballero's video game called "Papa & Yo."

Game designer Vander Caballero had an idea for a video game based on his childhood in Colombia. A central figure was his father — an alcoholic.

He spoke to his mentor, Nilo Rodis, who worked on the visual effects for the original Star Trek Trilogy. “Nilo looked at me and said, ‘Look Vander, don't take this the wrong way, but your story has been told a thousand times. You just have to figure out how to use the skills you have with this new medium and tell it,’” says Caballero.

At that moment, he realized that he could “do this… take my suffering and my hurt and transform it into something positive for others.”

So Caballero quit his job at a major game developer and launched Minority Media, a company based in Montreal that’s focused less on shoot-em-up games and more on offering players something a bit more meaningful, like the game Caballero created. It’s called Papo & Yo, or “Dad and I” in Spanish.

“I want to do a game that would have served me when I was a kid,” says Caballero.

To understand how Papo & Yo works, let’s start with Caballero’s childhood. He grew up in the 1980s in Bogotá, when the capital city was a battleground for drug cartels. Caballero’s family was wealthy, pretty walled off from the violence.

But Caballero faced another type of threat at home.

“It was really, really hard to go to sleep after 8 o'clock if my father hadn't arrived home… because that means that he was drinking,” says Caballero. “It was really terrible because I was just waiting for the electric garage door to open to start figuring what I'm going to do, where I’m going to hide.”

Caballero took refuge in games like Mario Brothers. “I remember that I'd spend days and nights trying to defeat Bowser, who was the evil guy [in Mario Brothers]. But then, when I put the control down, I came back to my reality and said that game didn't give me any clue whatsoever for how to cope with an alcoholic father.”

It’s the premise behind Papo & Yo, where the main character — a boy named Quico — tries to survive a monster’s destructive behavior. It’s a tension that resonates with fans of the game, like Vince Osorio.

I met up with Osorio at his home near San Francisco and watched as he maneuvered through Papo & Yo. On the screen, the boy, Quico, ran through a colorful favela in Brazil. The monster, at least five times bigger than Quico, tumbled closely behind.

Osorio, 24, designs mobile apps, and he’s also a long-time gamer. He wasn’t sure what to expect from Papo & Yo, especially after seeing the game’s opening quote. It states: “To my mother, brothers and sisters with whom I survived the monster in my father.” Signed, Vander.

“I remember taking a step back and saying, ‘Whoa, I didn't think we were going to go there.’ I didn’t know it was that type of game or this was the material this game was going to approach,” says Osorio.

Osorio realized the game is actually about the changing relationship between Quico and the monster: how Quico sometimes needs the monster’s help, or how the mood can quickly get pretty dark. At one point, the monster lunges at Quico, grabs him by the mouth, and ejects him across a large field.

“There's a palpable sense of danger in that there's a character that just turns on a dime and completely obliterates you when they get the chance, but doesn't kill you, which might actually be scarier,” says Osorio.

For Caballero, the game’s creator, feeling that sense of danger — how he felt with his own dad at times — is what he wanted to create in Papo & Yo.

And the game’s caught on. It’s been a Play Station hit, won awards, and Caballero’s been blown away by letters from players worldwide, thanking him for creating games like this.

Caballero recalls one letter he got from a single father in the United States.

“He told us that, sometimes, when he was really stressed he screamed [at] his kid. And then, playing Papo, he realized how his kid felt,” says Caballero. “It really touched me deeply because I thought I would only be able to touch the victims.”

It’s a response that’s motivating Vander and his company to create more games based on real, lived experiences. Currently, his team is working on a game called “Silent Enemy.” It’s about bullying.

Listen to Radio Ambulante's story on Papo & Yo in Spanish, here.