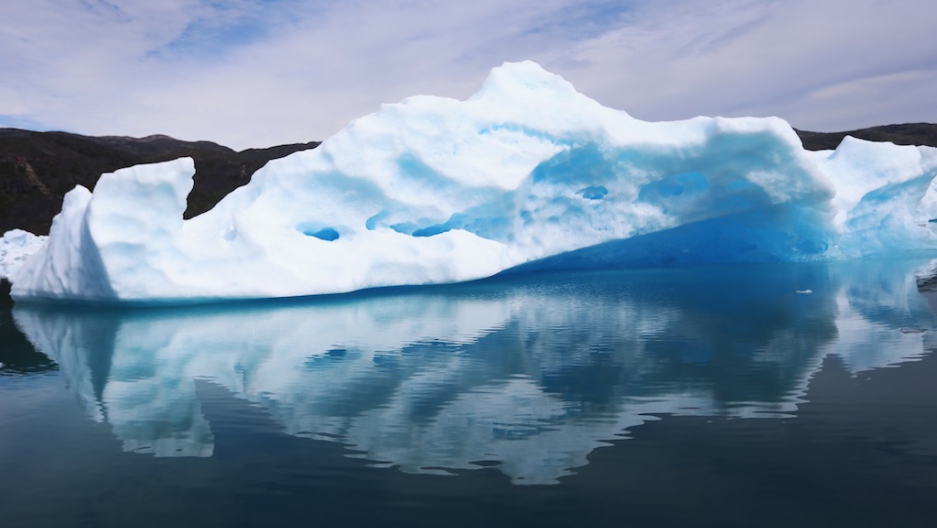 Calved icebergs float on in Qaqortoq, Greenland. Boats are a crucial mode of transportation in the country that has few roads. As vulnerable cities around the world strategize about responding to climate change, many Greenlanders simply do what they’ve always done: adapt.
Credit: Joe Raedle
Share

TASIILAQ, Greenland — In late summer, there are still icebergs in the harbor below this tiny hillside town.

The ice is not silent. At night, when the dogs have stopped baying and the pick-up trucks are all parked, you can hear the bergs cracking and shifting like ice cubes melting in a giant’s cocktail.

Their soft groans are like the sounds of living things. Or dying ones.

These massive, blue-white slabs were once part of the Greenland ice sheet, the vast glacial body that covers most of this Arctic country. Stretching 1,500 miles long, up to 700 miles across and 2 miles thick at the center, it’s the second biggest expanse of ice in the world, after Antarctica.

Greenland has lost more than 140 billion metric tons of ice on average annually since 1992.  That’s a mass roughly the size of Mt. Everest plunging into the sea, every year, according to Fiamma Straneo, a scientist at Woods Hole Oceanographic Institute.

The water stored in the glaciers doesn’t simply disappear. Greenland’s melt raised sea levels by about one-third of an inch between 1992 and 2011. Were the entire ice sheet to liquefy, it would raise global sea levels by 25 feet, drowning coasts on every continent.

Greenland won’t be ice-free any time soon. A complete melt would take hundreds if not thousands of years. There is concern, however, that within a century it could reach a tipping point at which the sheet’s collapse is inevitable.

It doesn’t take satellites to detect the changes. Some 57,000 people live at the edges of Greenland where ice thins out to rock.

In small wooden houses and hunting boats on the slate-gray sea, these predominantly indigenous Inuit residents are observing changes in the snow, ice and weather that follow no discernible pattern and that are fundamentally reshaping their lives.

Parts of the sea that once froze hard enough to support a sled team of 20 dogs now don’t freeze at all, or freeze so weakly that a false step could send a person plunging into the water below.

“Before, I could take a dog team on the ice out without thinking,” said Harald Maqe, 50. “Now, I have to think and think and think twice. If I don’t, it could cost me a life.”

Few people on earth live as close to the front lines of climate change as the Inuit of Greenland. Their observations complement a host of scientific research documenting a rapidly shifting world.

For all the questions climate science still has to answer, she said, “we do know a lot of these bigger things that should be pretty worrisome.”

“What’s happened?” the old man said, pointing to the bottom of the iceberg.

It had been years since the man had sailed in the Johan Petersen Fjord, one of several ice-laden inlets in the rocky crags where Greenland meets the sea. His hunting companion Julius Nielsen, 35, looked from the boat and saw nothing unusual.

In his day, the elder hunter said, icebergs were at least as robust beneath the surface of the water as above. He urged Nielsen to look again, and this time the younger man understood.

It was low tide. Below the high-water mark, the ice submerged in the warming seawater was withered like a rotting tooth.

Greenland is full of such surprises these days, Nielsen said.

“When I was a kid my big brother could say, OK, December, we will begin dog sledding. Or maybe in November. It’s easy to say, because the ice will come to the fjord,” Nielsen said.

“But it’s not possible to say [those things] anymore. We never know anymore when the ice will come or if there will be enough snow.”

Nielsen lives in Tasiilaq, a town of 2,000 people on Greenland’s east coast.

The western coast of Greenland — a semi-autonomous country in the Kingdom of Denmark — is dotted with towns and villages from top to tip. In the rugged east, where the ice sheet reaches nearly to the coast, human settlements are few and far between.

Boat, dogsled and helicopter are the only ways in or out of Tasiilaq. Many families get the bulk of their protein from seals, whales, fish and polar bears hunted from the nearby fjords and butchered themselves.

Evidence of a changing climate is everywhere in this hamlet of primary-colored wooden homes.

Lakes that used to be frozen solid by September now ripple in the wind in the fall.

Fjords that were too full of ice to sail in November are passable now until January or February.

The ice that seals off Tasiilaq’s harbor each winter isn’t as tall or powerful as it used to be, and it comes much later in the year.

Joel Brandt, 47, spreads his arms wide to show the six-foot holes he used to bore in the ice to fish in the winter months — then brings his hands barely 12 inches apart, to show how thin the ice has become.

People fall through this thinning ice. That doesn’t seem to alarm Tasiilaq residents. Men have always fallen through the ice, the hunters say. The weather here has always been volatile and imposing.

Weather-beaten satellite dishes sit atop some houses here, gathering news broadcasts from around the world. Everyone has seen the reports linking warming seas and shrinking ice to consumption in richer countries.

People shrug at this explanation, as if to say that they don’t know whether it’s true, or that it doesn’t really matter if it is. They have no more control over US greenhouse gas emissions than they do over the wind. They just have to deal with its consequences.

“The last 10 years, [the climate has changed] incredibly fast. We don’t know why,” Nielsen said. “Everything has changed. To be a hunter is not easy anymore.”

There was still ice in the Sermilik Fjord in the final days of this summer. Dinosaur-sized floes loomed above drift ice bobbing like Styrofoam in the sea. Thin panes of ice on the ocean’s surface shattered in the wake of a passing boat.

The Greenland ice sheet was visible in the distance like a low-lying silver cloud on the horizon.

It is into this fjord and hundreds of others like it that the glaciers at the edge of the sheet break off and collapse into the sea — a process known as calving.

Calving and melt have always been part of the ice sheet’s natural cycle. In the summer, when ice thaws and runs into the sea, the sheet shrinks. In the winter, when falling snow freezes to its surface, it grows.

But for the last several decades, the ice has been losing far more than it gains back.

Typically only about half the Greenland Ice Sheet’s surface thaws in the relative warmth of the summer months, re-freezing almost instantly in higher elevations.

In July 2012, for the first time in 30 years of satellite recordings, 98 percent of the surface of the ice went slushy. The change was so remarkable that NASA scientists first thought their instruments were broken.

The ice in the sea is changing as well. In March and April, when Arctic sea ice is typically at its peak, scientists recorded only half the mass that was there at the same time 30 years ago. Last summer saw the lowest levels ever recorded in the Arctic.

This summer, in contrast, was only the sixth-lowest amount of ice cover on record.

Greenland’s glaciers are also moving faster toward the coasts, for reasons that scientists cannot yet explain.

Then there’s the permafrost, the layers of prehistoric soil frozen at the poles. When permafrost melts, microbes devour the ancient carbon reserves within. Those microbes then release carbon dioxide, further warming the planet.

Greenland’s melt in the last decade has exceeded scientists’ expectations.

“I find it kind of scary to think that it’s 2013 and we have these ice sheets that are potentially collapsing and we’re not sure” what the future will hold, said Benjamin Linhoff of the MIT-Woods Hole Joint Oceanographic Program. “These things will have fundamental consequences for humanity.”

East Greenland has never been an easy place to live. People here are nothing if not pragmatic. If they need to adapt as a result of climate change, they will.

“Inuit people have always changed with the weather,” said Viggo Mikaelsen, 55, whose home village of Isortoq sits closer to the ice sheet than any other human settlement. “Our generation will do the same.”

Most hunters believe that dog sledding, the central means of hunting food in winter, will soon no longer be possible, or at least not over water. The ice simply can’t handle it anymore.

Twenty years ago, every family in Tasiilaq had its own dog sled, said hunter Joel Brandt — hundreds in all. Now there are maybe 50.

The wooden sled frames now sitting in front yards waiting for winter could become relics like the sealskin kayak in Tasiilaq’s Ammassalik Museum. People will have to stock up their freezers with seals before the sailing season ends, or maybe ice-free waters will make it possible to hunt by boat all year long.

The warming climate could even bring new sources of food to Greenland to supplement the hunts. Intrepid farmers in southern Greenland recently managed to grow strawberries – a sun-loving crop unthinkable here not so long ago.

“I tell my children, you have nothing to fear from climate change,” said Joel Brandt. “Maybe we won’t use dogsleds in the future. Maybe we’ll just sail. For the future generations, it will be easier.”

Brandt has been sledding for as long as he can remember. Would he not be sorry to see something that’s been such a big part of his life — and of his father’s, and his grandfathers‘ — pass away into history?

Of course, Brandt said. He will miss it. But he doesn’t want his children to know that. It’s better if they don’t think about what they’ll never have.

It is hard to imagine Americans being told that it is simply no longer possible to buy beef, or drive a car on the highway, or enjoy anything as central to their lifestyle as sledding has been to people in Tasiilaq.

That resistance to change may explain a great deal about why the ice is thinning and the seas are rising. The only difference is that Americans can still believe they have a choice.

In Greenland, the reckoning is already here.