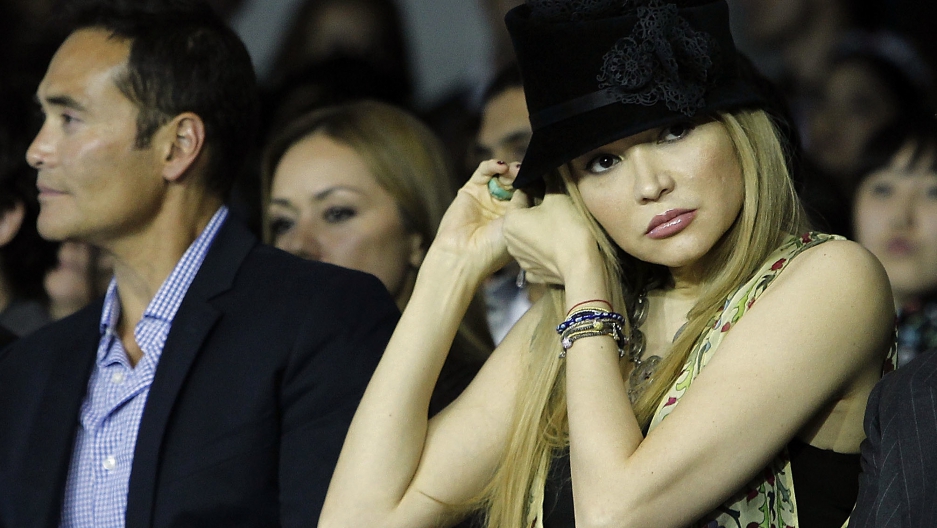 Out of favor? Karimova in Tashkent in 2012.
Credit: Yves Forestier
Share

TASHKENT, Uzbekistan — What to make of Gulnara Karimova? The president’s favorite daughter has won international notoriety with her exploits as a would-be pop star, diplomat and businesswoman. At home, she’s been called the “most hated person in Uzbekistan,” according to US diplomatic cables published by WikiLeaks.

Now, a rare public spat between Karimova and members of her family — partly played out on Twitter — may be providing her with another unlikely persona: heroine and cause celebre for young Uzbeks.

Once seen as a possible successor to her father Islam Karimov, leader-for-life of one of the world’s most repressive regimes, the outspoken Karimova has long said nothing about her country’s abysmal human rights record. Until very recently, few could imagine she’d be anything but daddy’s little girl.

Then her affairs began to unravel.

Implicated in corruption and money-laundering investigations in France, Switzerland and Sweden in 2012, Karimova was forced to step down from her post as Uzbekistan’s permanent representative to the United Nations.

Last October, her four TV networks and three radio stations suddenly went off the air. Reports emerged that the tax authorities raided her charity’s offices and that her shops and bank accounts were being seized.

Glamorous, wealthy and seemingly addicted to social media, the divorced mother of two has shown little regard for traditional notions of what her role as eldest daughter of the ruling family should be.

Now she’s openly accusing her father’s administration of using its well-document methods of arbitrary detention and torture against her own staff and supporters.

In a society where people keep opinions to themselves, that’s fueling a rare public debate about whether the self-proclaimed “exotic beauty” is the innocent victim of a nefarious plot by the secret services or a national liability who’s being put in her place.

One tweeter, @Sergey_Sergey_G, criticized the security services. “Gulnara’s twitter is down for a second time in this day. Uzbek SNB is not sleeping #Bastards.”

@VomihaRRajnaS tweeted, “The SNB is eager for power, Gulnara prevents, Dad does not know, bloggers are arrested, redistribution of business is going on that loud background.”

Such declarations may be less surprising than the belief that Karimova has injected a measure of vitality into a largely impoverished country whose authorities force university students to pick cotton, the main cash crop, just like under communism.

“Ok, she controls half of the city, but she gives us a taste of the European lifestyle — without her we’d be in the stone age,” one Tashkent-based Facebook user commented.

In September, her younger sister Lola Karimova-Tillyaeva apparently tried to distance herself from Karimova by telling the BBC that the pair hadn’t spoken in 12 years.

Karimova hit back accusing Lola as well as their mother Tatiana Karimova of witchcraft. She also claimed the SNB — little different than the KGB it replaced — detained and beat her bodyguards.

With media heavily censored inside the closed country, reliable information is thin and theories as to what’s really going on in the inner circles of power are based almost entirely on rumor and speculation.

Speaking in an interview, an SNB officer said he believes Karimova, backed by Western intelligence agencies, was preparing for a “color revolution” similar to the ones that overthrew old administrations in Ukraine and Georgia a decade ago.

Rumors say SNB head Rustam Inoyatov pressed Karimov to shut down all his daughter’s activities after the plot’s discovery.

Karimova apparently shot back by accusing Inoyatov of trying to seize power.

Much of the evidence has emerged on Twitter, where Karimova likened her father to Stalin last month.

But she’s been careful not to blame him directly for what she’s described as a plot against her.

“[Tatiana Karimova] forces my father’s entourage to prevent me from contacting my father,” she tweeted in late November.

Some believe Karimov is being shielded from the attacks by his daughter’s adversaries.

“I think Gulnara’s version is closest to the truth,” says Valeriy Kanh, a political science professor at the National University of Uzbekistan, who stressed that his views are his own, not the university’s. “It seems to me that he really is in the dark about what is happening.”

Karimova has dominated Uzbek popular culture with stints as a singer — which included duets with Julio Iglesias and Gerard Depardieu — whose stage name is Googoosha, and as a fashion designer. She’s also hosted film, talent and music festivals.

But many believe her real business activities to be shadier. The US embassy cables published by WikiLeaks describe her as a “robber baron” who “bullied her way into gaining a slice of virtually every lucrative business” in the country.

“I was happy with all my heart when I heard that Gulnara's empire begins to crumble,” says Abdugafur, a local businessman in Tashkent who asked that his last name be withheld. “For so many years, she brazenly controlled the entire business sector in the country and monopolized culture — now she’s getting what she deserves.”

However, Karimova still boasts many thousands of fans among social media-savvy young Uzbeks. With more than 60 percent of the population under 30, that demographic represents a significant support base.

Her fanclub has some 50,000 members on Uzbekistan’s most popular social network, Odnoklassniki.ru, which far outstrips any other fan group.

“There are a whole army of Tweeters with you!” wrote user @skif00 in November.

As her recent difficulties became apparent, the hashtag #WeareforGuli appeared on Twitter in November.

“Gulnara never was a good girl, but to some extent I feel sorry for her because people who are struggling against her are no better than she — even worse,” says Anton, a student at the Tashkent Institute of Economics. “She was at least liberal and pro-Western. Now the ‘kingdom of the KGB’ awaits us.”

More from GlobalPost: Bickering, but no movement in Ukraine’s crisis

“Undoubtedly, Gulnara’s [wooing of the youth] was a strategic decision,” Kanh says. “Now her fans, mostly between the ages of 18 and 25, constitute the most active part of society.”

Last month, Karimova tweeted that 10 of her supporters were arrested at their homes and their computers confiscated. Most were released after being subjected to what she described as “intimidation.”

Hours later, Karimova’s Twitter account was shut down. It reopened the following week, when she tweeted that a former employee, 31-year-old designer Janis Galanos, was arrested, beaten and forced to say that Karimova’s legions of Twitter supporters were fake.

Kanh believes Karimova supporters could be numerous enough to “destabilize” the country if they were to act together.

But few seriously believe young Uzbeks will take the protests in her defense any further.

The writer has asked to remain anonymous for security reasons.