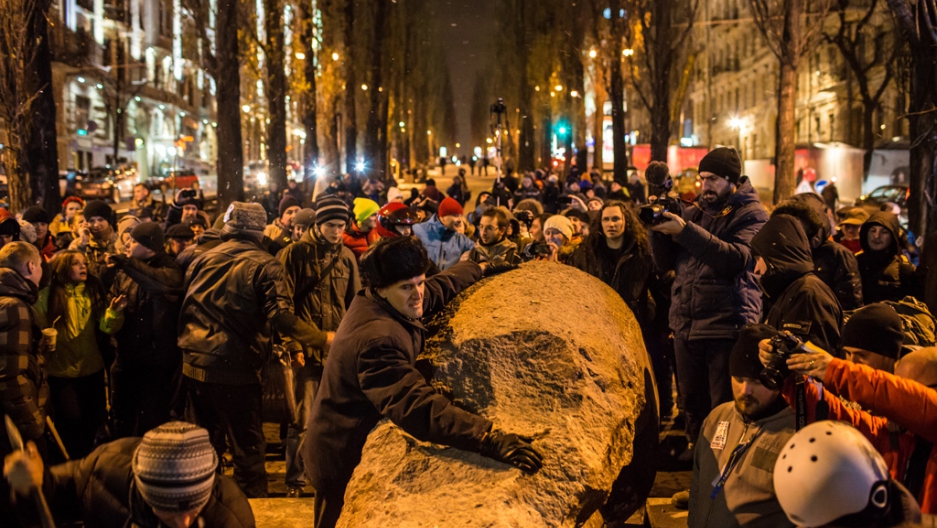 But on Sunday night, the weathered, 78-year-old stood dumbfounded and overcome with emotion, staring at the empty pedestal in central Kyiv where a statue of Soviet founder Vladimir Lenin stood before it was toppled by anti-government protesters.

For more than two weeks, pro-European demonstrators have rallied in Ukraine’s capital by the thousands, calling for the government’s ouster over its abandonment of key deals with the EU in favor of closer ties with Russia.

On Sunday, hundreds of thousands rallied in the largest protest yet.

The demonstrations have spawned an array of trademarks: the moniker “Euromaidan,” lapel ribbons that blend the Ukrainian and European flags, and chants — such as “Away with the gang!” — which are shouted rapturously on the streets and in the subway.

But after nationalist protesters dragged the marble statue down with a steel cable and bashed it to bits with sledgehammers on Sunday night, the uprising may have finally acquired its most vivid image.

Elated crowds rallied around the bare mantle, erupting into renditions of Ukraine’s national anthem. Passing cars feverishly honked in support. Protesters called their friends and loved ones with the momentous news.

“Hi Mom,” said one. “Tell grandma that Lenin has fallen.”

One widely respected Ukrainian journalist even loosely compared it to the fall of the Berlin Wall.

More from GlobalPost: What's next for Ukraine's 'revolution'?

Opposition leader Vitali Klitschko told reporters that Lenin's toppling had not been planned or ordered by the opposition.

Still, those who greeted the statue’s destruction say it represents a symbolic moment in a wave of demonstrations aimed at establishing Ukraine’s European identity and wresting the former Soviet republic once and for all from Moscow’s grasp.

“This one symbol has fallen, and now we’re waiting for the rest —like Yanukovych and Azarov — to fall as well,” said Valeriy Klymchuk, a 42-year-old construction worker from southern Ukraine.

“They will fall,” he added, “because there’s no other way.”

But not everyone is likely to celebrate the move.

While nationally conscious Ukrainians blame the Soviet Union and its leaders for suppressing Ukrainian identity and killing millions in a state-engineered famine, others remember it fondly for the relative social and economic stability it provided.

That’s particularly the case in the country’s Russian-speaking and industrialized eastern regions, which value relations with Russia over European integration.

To many, destroying Lenin still amounts to destroying a chunk of history.

After a nationalist activist scaled the statue in 2009 and smashed off its nose and hand, Ukraine’s Communist Party — a small, yet relatively influential force — raised money to pay for its reconstruction. It even stationed its own members there in a round-the-clock vigil.

Moments after it was finally toppled on Sunday, the governor of the eastern Ukrainian region of Kharkiv reportedly announced he would collect money for a new statue.

But the pro-Europe protesters here insist that it’s time Ukraine shrugs off its Soviet fetters. Toppling Lenin, they say, was the perfect gesture.

“My parents always told me that times were never good during the Soviet Union,” said Alina Borodenko, a 25-year-old marketing professional from Kharkiv, as she watched demonstrators scale the pedestal and wave Ukrainian and European flags.

“Our common history with the Soviet Union is a black stain on our lives, our biography, and our Ukraine.”

Lenin’s destruction may have been significant, but there is still no end in sight to the wave of mass protests and ongoing political crisis that have swept Kyiv.

By late Sunday evening, tens of thousands were still milling about central Kyiv. Many amassed around key government buildings and erected blockades there, effectively cutting off access to them.

On Sunday, the Security Service of Ukraine (SBU) said in a statement that it was investigating unidentified politicians — presumably opposition leaders — for “attempting to seize state power.”

In an address to demonstrators read by her daughter, imprisoned former Prime Minister Yulia Tymoshenko — who critics say was jailed for political reasons — urged demonstrators to prepare for a “long and complicated” battle.

But for protesters like Klymchuk, who proudly clutched several bits of marble from the destroyed statue, the prospects are bright.

“The country is changing before our eyes, and people have an entirely different mindset,” he said.