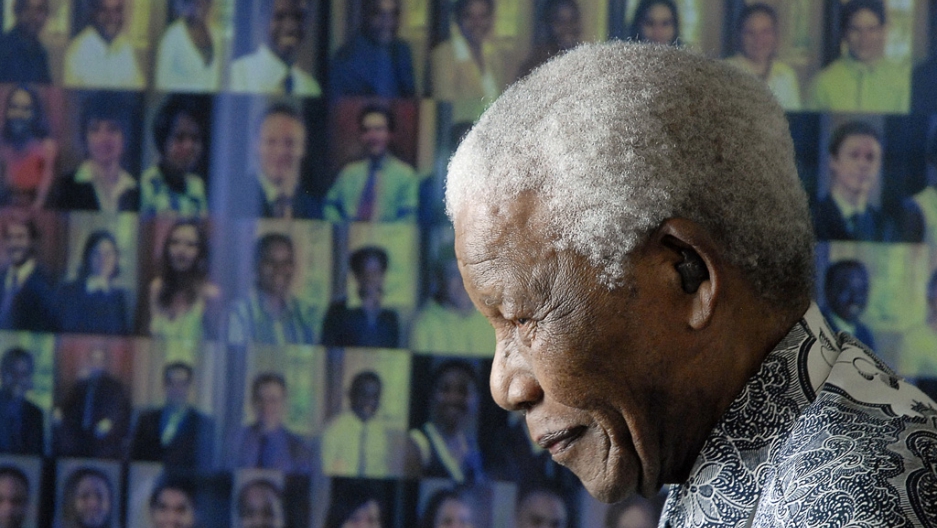 As a news junkie I’m a bit chagrined to admit that my early awareness of apartheid and the man who would bring it down was provided not by the New York Times but by Jamaican reggae.

Yet in a roundabout way it was the work of Bob Marley, Black Uhuru and Burning Spear that opened the door to one of my career highlights: meeting Nelson Mandela.

In the 1970s and ’80s a great deal of reggae was protest music, songs of freedom by black artists who took aim at South Africa’s system of official racism.

Of course, such heavy subject matter was leavened by all those Rastafarian odes to ganja, a subject with which at the time I was a bit more familiar.

Famous for "Legalize It," his before-its-time call for marijuana decriminalization, Peter Tosh in 1978 released a soaring anthem called "Apartheid." The song hammered the Pretoria regime for everything from its nuclear weapons program to its lack of schools and hospitals for black people. Tosh sometimes played it with a guitar shaped like a machine gun.

Best of all was "War," Marley’s adaptation of Ethiopian leader Haile Selassie's 1963 address to the United Nations General Assembly that accused South Africa of holding the black population in “sub-human bondage.”

Beyond the miracle of turning a long-winded UN speech into something danceable, Marley issued this stark warning:

By the time Mandela was freed from Robben Island, I was far more versed in his struggle. I was now addicted to newspapers and was covering Central America and the Caribbean for the oft-bankrupt news agency UPI.

The assignment had allowed me to rub elbows with plastic politicians like Dan Quayle and banana republic dictators like Manuel Noriega, but never a living legend. However, in July 1991, my job and my lingering crush on reggae would briefly put me at Mandela’s side — albeit not in the way that either of us expected.

I had never been to Jamaica but suddenly decided that I couldn’t miss the annual Sun Splash reggae festival. Somehow I convinced UPI to pick up my airfare in exchange for a few dispatches from the island. By sheer coincidence, that same week Mandela was touching down in Jamaica as part of his round-the-world victory lap following his release from prison.

For both of us, Jamaica should have been bliss. How could you not find happiness at a three-day music festival on the shores of Montego Bay?

For Mandela, Jamaica was the birthplace of Marcus Garvey, a pioneering Black Nationalist leader who inspired liberation activists around the world. In addition, the majority of Jamaica’s population is of African descent and it seemed that the whole island had closely followed Mandela’s trajectory.

Yet for both of us, Jamaica turned out to be … not so great.

For starters, the racial tension was palpable as was the simmering resentment about the hordes of rich tourists descending on an island where so many people still lived in poverty. As for the music, I seemed to have arrived a decade too late.

By 1991, Marley was long since dead from cancer while Tosh had been gunned down by gangsters. Politically tinged roots reggae had been pushed aside by raunchy, sexually obsessed dance hall. One of the headliners at Sun Splash that year was the gravel-voiced Shabba Ranks whose big hit was about moving a "Trailer Load A Girls" from London, Canada and the US, through customs duty free. I was only in my 20s but felt like a geezer.

Fortunately, my encounter with Mandela would coincide with a government-sponsored free concert at the National Stadium in Kingston featuring a lot of people who really could sing, like Jimmy Cliff and Carlene Davis, who had just scored a hit with "Welcome Back Mandela." The climax of the show was supposed to be an appearance by the great man himself.

But the event was about as well-organized as the 1969 mud-fest at Woodstock. A massive crowd jammed the stadium and there was a lot of drinking and doping.

When Nelson and Winnie Mandela finally entered the stadium in a convertible, ecstatic fans began scaling the chain-link fence dividing the bleachers from the infield. Police agents tried to hold them back but were pelted with bottles. As people poured onto the field to chase after the Mandelas’ motorcade, several panicked policemen began shooting in the air.

The Mandelas looked on in horror as gunfire injured two people and killed a man who was sitting in the stands with his son. I ran for a telephone to file a report to UPI on how an event to honor an worldwide icon of harmony and peace had turned into a nightmare of rage and bloodshed.

Writing about the tragedy in Kingston’s The Gleaner newspaper, Peter Espeut lamented: “Our police kill more black people every year than the Apartheid police did in South Africa!”

I finally got to meet Mandela the next day at one of the strangest news conferences I’ve ever attended. The Jamaican reporters seemed deeply embarrassed and absolutely refused to broach the topic of the stadium tragedy.

I had spent weeks pondering what to say to Mandela but now I had no choice. What, I wanted to know, was going through his mind last night when all hell broke loose?

Mandela was the perfect diplomat and I should have known. During a lifetime of clandestine organizing, trials and prison, Mandela had seen far worse than a reggae concert gone wrong. He brushed off my question, praised his hosts, then jumped aboard a jet and was gone.