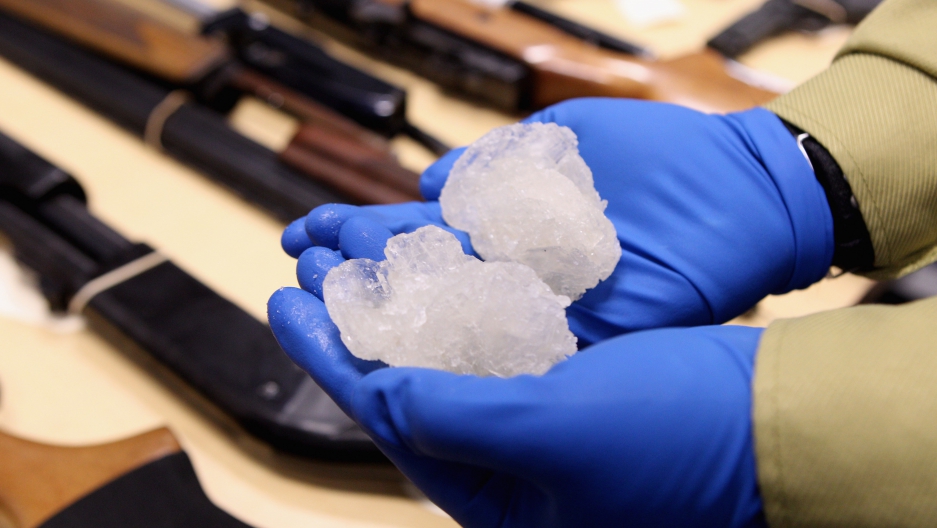 The five men — from China, the UK, the Philippines and possibly Slovakia — stand accused by the Drug Enforcement Administration (DEA) of conspiring to sell 40 pounds of 99 percent pure methamphetamine to an undercover agent. The group pleaded not guilty. They will appear in court in early December.

You wouldn’t guess it, but North Korea — run by the world’s most infamous authoritarian regime — happens to be a colossal supplier of a highly potent but moderately priced form of crystal meth, experts say.

It comes in the form of “ice,” the powerful, smokable type that delivers a near-immediate jolt to the brain.

The drug is primarily made for export, ferried through China and, from there, distributed around the world.

But some North Koreans — despite the watchful eyes of their government — are avid consumers of crystal meth too.

Two North Korean refugees in Seoul told GlobalPost that, in a country suffering from poverty and food shortages, the drug is a much-needed appetite suppressant, offering a means of self-medication to cope with the hardship.

Near the Chinese border, they said, ice was widely available on the black market. It was popular among private traders and their families, who had no problem inhaling or selling it in outdoor markets with a bribe to authorities.

“Life was hard, people were hungry, and we needed the drug,” said one female North Korean defector in Seoul, who fled to the Chinese border region in the mid-2000s.

She admitted to smoking ice multiple times, and once gave smaller doses to her two boys, aged 11 and 13. “My family was a little wealthier, so we could afford it, but even poor people did it too,” she said. “It was a popular drug.” She asked not to be named, fearing reprisals against family members still in the country.

Of course, various types of amphetamines enjoy some popularity in developing countries in Asia and Africa, where laborers, for instance, need energy to work long hours on scant meals. Even South Korea, which leaped from poverty to riches in about 30 years, was once a big-time producer of crystal meth.

This booming trade, now in private hands, was once a fundraising arm for the cash-strapped government, experts say. North Korean embassies trafficked in hashish as far back as the 1970s.

After the fall of the Soviet Union, the economy collapsed, resulting in a devastating famine. By the mid-2000s, a nascent class of merchants flourished, peddling just about every illegal product you could imagine, including drugs and pirated DVDs.

“These days, more and more freelancers and professional drug dealers are taking over this murky operation of delivering the drugs produced in North Korea, packed in Northeast China, and smuggled via South East Asia to Australia, America and Europe,” said Leonid Petrov, a North Korea watcher at the Australian National University in Canberra.

“Many North Korean scientists began to moonshine in private laboratories producing the similar high-quality product for domestic consumption and illicit export,” he said. Since crystal meth laboratories are smelly, they would have to be away from populated towns.

From a business standpoint, moving the contraband from North Korea to China would be realistic and highly profitable.

Chinese Mafiosi probably hand over supplies, while North Koreans, in the safety of their country, synthesize the drugs in factories near the southern banks of the Tumen River that marks part of the boundary between North Korea, China and Russia, writes Andrei Lankov, a North Korea specialist at Kookmin University in Seoul.

That’s a swift change from a lucrative narcotics trade that, a decade ago, was mostly state-run.

Still, it’s not clear whether the group of five suspected dealers had the resources and connections to move meth from North Korea all the way to North America. Prosecutors accuse the group of trafficking and selling North Korean drugs in Southeast Asia, a more reachable market.

One suspect even boasted that his organization was the only one that could get the job done. “Because before, there were eight [other organizations]. But now only us, we have the NK product,” Chinese suspect Ye Tiong Tan Lim was quoted as saying on the recordings.

The suspect said that his group stockpiled one ton of North Korean meth in the Philippines, anticipating an unconfirmed decision by North Korea to destroy meth labs under pressure from the US. The drugs would be shipped through Thailand, according to prosecutors.

The two North Korean defectors told GlobalPost they were unsure whether laboratories have been destroyed. One study in the North Korea Review suggested that the trade was indeed moving from an array of factories to the underground.

But, explains Petrov, “As with everything that comes out of North Korea, the veracity of this story is 50-50.”