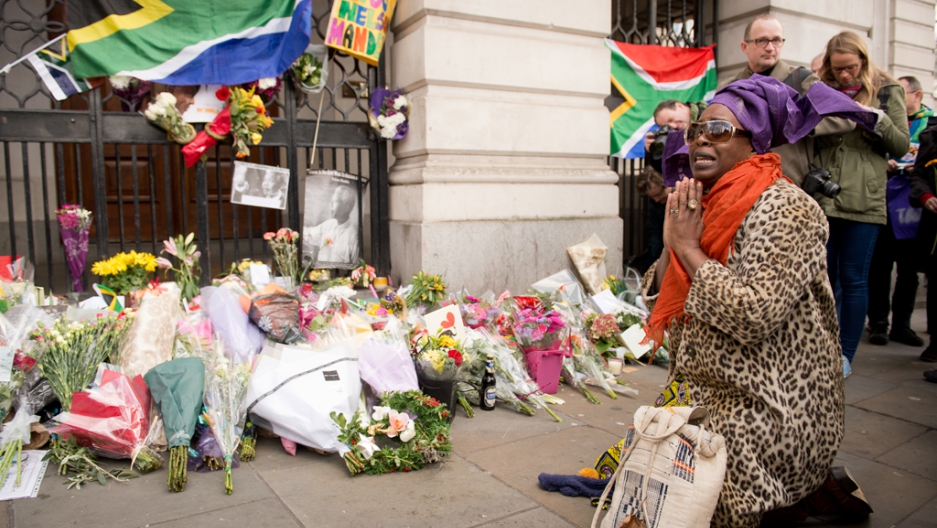 LONDON, UK — Kwame Brown knows exactly where he was the day he laid eyes on Nelson Mandela.

It was July 12, 1996. During his first state visit here, South Africa's first black president had asked to visit Brixton, a racially diverse south London neighborhood that was an incubator for Britain's black consciousness movement.

More than 12,000 people squeezed onto the steps of the Brixton Recreation Centre and spilled onto the streets to get a look at the man. In photographs, Mandela's companion Prince Charles looks positively stunned.

Brown, the owner of Bush Man Kitchen, a Caribbean takeaway counter tucked under the rec center steps, was there.

"When I saw the man himself, it was like the whole heavens opened up," Brown said, smiling at the memory. "And I opened my eyes so wide to see him."

Mandela's death Thursday at the age of 95 left a powerful impact on this city, which has close ties with both the old and new South Africa.

Mandela's life and legacy feels personal for many people here. Many in South Africa, a former British colony, claim British descent, and hundreds of thousands of South African-born expats make their home here.

Exiles such as Mandela's ANC colleague Oliver Tambo made their homes here while coordinating the struggle against apartheid from abroad.

At the Embassy of South Africa in Trafalgar Square, hundreds lined up around the block Friday to sign a condolence book. Tributes of flowers, cards, candles and — in one case — a bottle of South Africa's Castle beer were laid outside.

"I don't know anyone who could have gone through the 27 years and come out with such dignity," said Gloria Blackburn-Smith, 73.

"I used to tell my children, 'I know a man who was in prison who rose to be a president.’"

Originally from Jamaica, the Surrey resident brought her granddaughter Aliyah, 11, to pay respects.

The line of well-wishers represented Mandela's broad appeal across race and culture.

London resident Paul Hendrick stood in a tweed cap and sweater. As an 18-year-old student in 1965, he hitchhiked to London from northern England to demonstrate against apartheid in Trafalgar Square.

"The people who were standing in this embassy then were representatives of the apartheid regime," he said, gesturing to the stone building that still has Suid-Afrika — the country's name in Afrikaans — chiseled on the front.

Hendrick now has a white beard and tweed coat. Much has changed since his student days for South Africa and the world.

"I'd like to pay my respects to the chap who made such a huge difference," he said.

Behind him in line was Pauline Campbell, 48, of London. She also wanted to sign the book for a man "who gave his life just so I could know freedom."

Atlhough born and raised in the UK as a black woman, she said, "I never felt free until South Africa was free. It was like he unlocked a door." Mandela's leadership during the apartheid struggle "gave me a greater sense of being a black person. It gave me the strength to speak up for myself."

More than 200,000 South African born people live in Britain, both those who fled the apartheid state and members of a newer generation.

In line at the embassy were siblings Ayoub, 55, and Sophie, 54. The siblings, who declined to give their last name, are of Indian descent, and were forced from their home in Johannesburg as small children by the Home Areas Act, apartheid-era legislation that segregated neighborhoods by race.

Both were active in the anti-apartheid struggle in the UK. Sophie even named her daughter after Mandela's daughter, Zindzi.

"When he was released I was over there," she said, pointing across the street to Trafalgar Square, "about 8 months pregnant, and Zindzi was dancing in my belly."

All down Whitehall, the avenue on which London's national government buildings stand, flags flew at half-mast in honor of Mandela on the order of Prime Minister David Cameron. In Parliament Square, flowers, notes and banners piled up at the feet of the Mandela status that looks out onto Parliament.

"I'm old enough to remember where I was the day he was released from prison. Growing up as a white South African, you're pretty sheltered. [Mandela's release] really signified a time when our parents couldn't shelter us from the truth anymore about the country.”

"Today's the day we miss South Africa," he said, echoing the sentiments of many fellow expats here. "We're a bit homesick, but it's a proud day to be South African as well."

[View the story "Mandela touched lives in Brixton, too" on Storify]