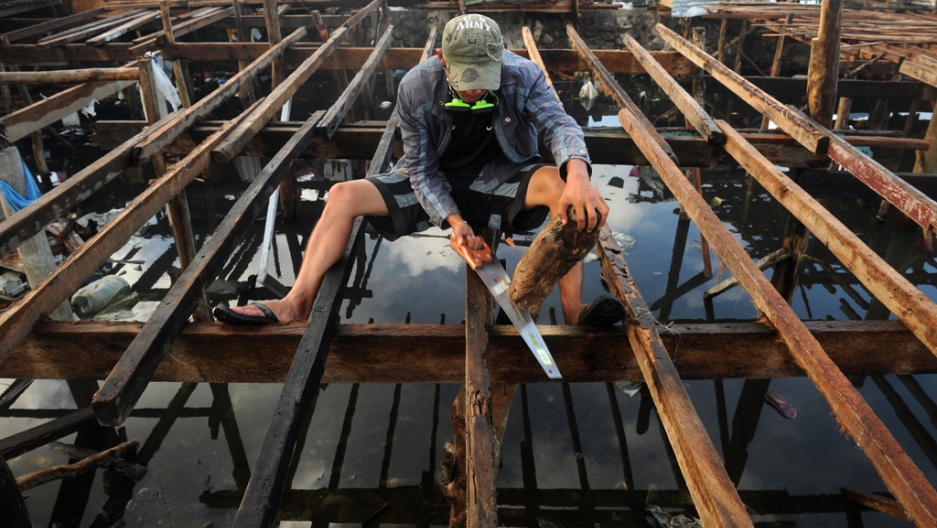 A man reconstructs his house at the bay of Tacloban, Leyte province on November 27, 2013.
Credit: NOEL CELIS
Share

BASEY, Philippines — Elegario Ocdol’s home has become rubble. Most of the house and its contents have vanished. Only jagged pieces of fabric, metal and crockery lie strewn across the stone floor — traces of a life reduced to a memory.

Ocdol, a 38-year-old elementary school teacher, used to lead a fairly ordinary life. He worked hard to provide for his wife Maricar and their five children, worried about his debts and went crab fishing regularly to help feed his family.

But on Friday, Nov. 8, his life — and the lives of millions of others — changed forever when Typhoon Haiyan struck the central Philippines. Nearly a month later, I drove with a team of Oxfam colleagues to the expanding front line of a crucial but challenged relief effort.

The international aid response has been relatively generous, already raising half of the $348 million needed for the first six months of recovery. More than three million people have received help. But relief efforts now need to expand fast to help millions more struggling to cope, especially in remote rural areas. The most immediate priorities are food, water, healthcare, and shelter.

Haiyan delivered a deadly double blow. First came one of the strongest storms to make landfall in history. Then followed a storm surge: a phenomenon that's hard to comprehend until you see the effects. The sea rose 5 to 6 meters high before ramming into coastal towns and farmlands like a train ploughing through a street of doll houses.

More than 5,600 people were killed and 1,700 are still missing. About four million were left homeless.

We drive through city streets lined with debris and rough rural roads flanked by wood and metal shacks ripped to shreds. We pass farmlands sodden with seawater and studded with coconut trees snapped in half like matchsticks, their missing trunks often blocking roads, snapping power lines, or crushing flimsy shacks.

Ocdol's story is retold across a devastated region.

In some cases, it's even worse. About 35 kilometers from Basey, on the neighboring island of Leyte, lies the coastal town of Palo. They're still pulling out bodies from the mounds of rubble where neighborhoods once stood. Hundreds are still missing: most are assumed dead, their bodies trapped beneath the rubble.

"It's good it's raining today," whispers an Oxfam colleague, "or the smell would be everywhere."

My colleague has come to Palo coordinate relief plans with local officials. I watch aid workers erect a tent city for some of the people who survived Haiyan. Nearby, low mounds of sandy gray soil cover the mass graves of more than 300 people who did not.

Coordinating all of this is a huge task. The government’s system for disaster responses was overwhelmed by Haiyan's scale. There have been massive challenges in logistics and communications, which have hampered distribution of aid.

"After the typhoon, our administration was badly affected, our communications were lost - it took three days to pull our team together," says Petilla.

Once they regrouped, Petilla's staff worked with doctors, local nuns and others to set up emergency medical services. Support arrived from local and international aid organizations, along with national and foreign military personnel.

Back in Basey, Ocdol's family is staying with eight other families in the damaged local library. There's no toilet or washroom: a standing water pump outside is used for washing.

Like many others made homeless by Haiyan, Ocdol has no idea where his family will end up.

Standing in the remains of his home, Ocdol’s eyes brim with tears.

"My oldest child talked about becoming a doctor. That was my dream too. Now, my children's future is in darkness."

There is, potentially, a flame of hope flickering in the gloom. The first priority in any disaster is to save lives and prevent illness and disease. But as Palo’s mayor notes, there also comes an opportunity to rebuild broken communities and leave them more resilient in the face of future shocks.

“We can’t just put people back into shacks,” says Petilla.

The Philippines frequently experiences typhoons – a hazard made more severe by climate change. The region most affected by Haiyan is also one of the poorest. Such poverty traps families in flimsy homes, with no means of self-recovery when typhoons strike.

With international backing, the Philippines government can drive a major redevelopment of the disaster zone that invests in safer, more prosperous communities. It should also strengthen those authorities, emergency services and local organizations at the frontline of any emergency.

I ask Petilla what more the international community can do.

"Help us rebuild," she replies. "I get depressed when I think of all the deaths or see the damage. But if we can rebuild well, there is hope.”

Shaheen Chughtai is deputy head of humanitarian and security issues for Oxfam. Based in the UK, he is currently on emergency deployment in the Philippines.