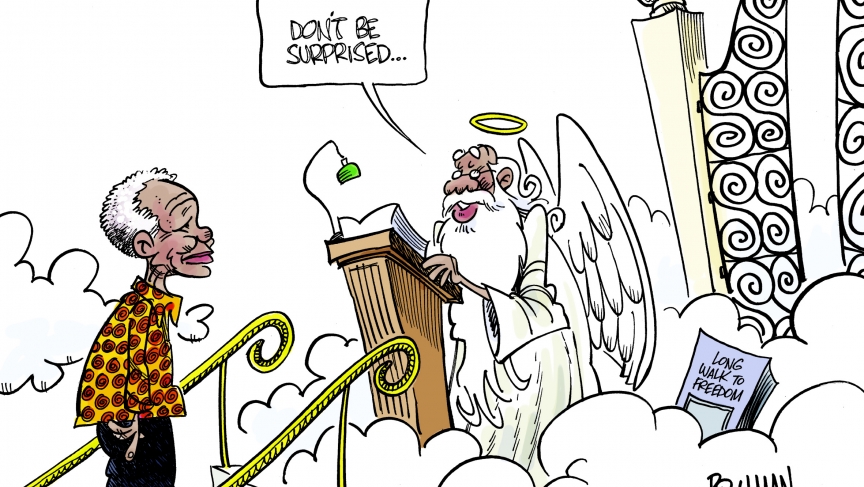 Mandela was fond of saying "I am not a saint, unless you think of a saint as a sinner who keeps on trying."

As much of the world mourns the death of Nelson Mandela, the news media are flush with remarkable stories about his life and the dark era of apartheid.

Few may know that the US helped South Africa to arrest Nelson Mandela. Newsweek recounts the tale of CIA asset Millard Shirley alerting South African officials to Mandela's movements, so they could capture him.

PRI's The World takes a look at Mandela's life through political cartoons. And that's no easy feat, since South Africa banned images of Mandela from appearing in the press.

"She said, "this is the day you will never forget for the rest of your life — you are now FREE.’"

In a videotaped interview, BBC reporter Nomsa Maseko recalls walking into her home in South Africa and seeing her mother, in tears. Nelson Mandela had just walked out of prison — and South Africa would never be the same. Maseko was 10 years old at the time, and talks about what Mandela has meant for her generation.

In Soweto, South Africans sing and tell stories of Mandela

BBC South Africa Correspondent Milton Nkosi lives in Soweto, the township where Nelson Mandela and many resistance leaders lived. While across the street from Mandela's home there, Nkosi shared vivid memories with PRI's The World of both Mandela and the early days of the resistance movement. Nkosi's father was part of it.

US authorities put a media blackout on hunger strikes at Guantanamo

Hunger strikes have long been a tool for prisoners at Guantanamo Bay to put pressure on US authorities and gain publicity. The Miami Herald even has a tool that tracks the number on men on hunger strikes. But no more.

The AP reports that US military officials will no longer provide information about hunger strikes to the media. "The release of this information serves no operational purpose and detracts from the more important issues, which are the welfare of detainees and the safety and security of our troops," a military spokesman said.

Male contraceptive pill? Bring it on

This week, researchers announced a possible new method for creating a safe, and reversible male birth control pill. It's a drug that blocks two proteins critical to the launch of sperm from the testes. So far, it works in mice. Still, there have been many effective versions of a male contraceptive developed to date. None have come to market because it's not clear if men will take them.

Writing for The Guardian, James Mackenzie says he's been part of a clinical trial testing earlier male contraceptives that use a mix of male and female hormones, and he recommends them highly. He enjoyed the experience and thinks it's a good idea "for men and women to spend a little time with each other's hormones."

Chinese film director Zhang Yimou is famous in China. He even staged the opening ceremony for the 2008 Beijing Olympics. And over the last six months, rumors have swirled that he had fathered many children. Zhang finally admitted that he and his wife violated China's one-child policy, having three children. Zhang could face a fine for his violation, which would be based on his income. And that's high — the fine could reportedly reach $40 million, as PRI's The World reports.

The Eiffel Tower has been lit up in the colors of the South African flag in memory of Nelson Mandela. pic.twitter.com/cMB3b8EVe1

The UK storm we told you about yesterday packed a punch. With a storm surge not seen in the past 60 years, seven homes were either demolished or swept into the sea in the town of Hemsby on the Norfolk coast, as the BBC reports.