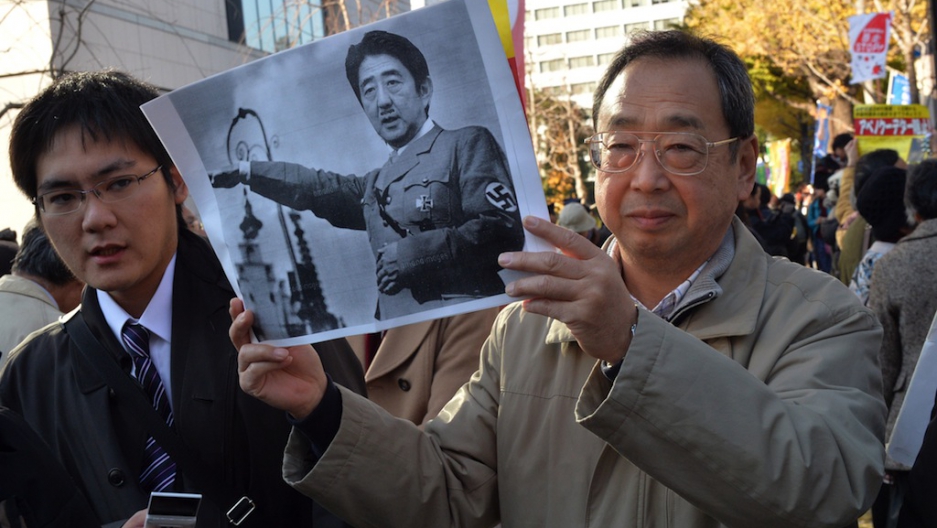 A civic group member holds a picture of Japanese Prime Minister Shinzo Abe morphed with the image of former German chancellor Adolf Hitler during a rally to protest against a controversial new state secrets bill in front of the National Diet in Tokyo on December 6, 2013. A controversial state secrets bill became law in Japan Friday night despite objections from a broadening coalition who say the legislation is being rushed through parliament.
Credit: Yoshikazu Tsuno
Share

The context: In late November, China declared an “air defense identification zone” in airspace over the disputed Senkaku (Diaoyu to China) islands, which Japan controls. On Wednesday, Vice President Joe Biden raised hackles over this provocative step with Chinese president Xi Jinping, in what he called a “very direct” meeting.

Abe’s party sailed to electoral victory on platform that included revising the constitution, to undo a post-World War II policy of pacifism and allow the country to raise a standing army.

They haven’t yet succeeded in doing that. But in a rare late-night parliament vote Friday night, they achieved another key goal by passing a controversial security measure: the Bill on the Protection of State Secrets — essentially Japan’s version of the USA PATRIOT Act.

The Obama administration, which has long complained of intelligence leaks in Japan, supported the bill.

The absence of a wider-reaching bill had made Japan’s pursuit of whistleblowers somewhat lax compared to its neighbors, hampering intelligence-sharing efforts, backers argue. They also contend that Japan needs a centralized statute to prosecute state secret leakers; it had relied on separate laws applying to civil servants and national defense service members.

Although protests are far from common in Japan, thousands of demonstrators amassed outside parliament this week. Many fear the government is steamrolling whistleblowers and free speech in pursuit of a stronger alliance with its mighty ally.

They claim the text is poorly written, and has been pushed through hastily and secretively. “The government has not said exactly what will become secret,” explains Aki Wakabayashi, director of Transparency International Japan, and a whistleblower who once exposed lavish government trips paid out of a secret national security budget. “So the law could allow the government to withhold more information and ultimately undermine Japan’s democracy.”

Here are four disturbing ways the bill could be a democracy muzzler.

It defines terrorism as imposing one’s opinions on others.

On November 29, ruling party lawmaker Shigeru Ishiba lashed out at demonstrations near the Diet building in Tokyo, writing in his blog that protesting the bill is “seems not so different” from an act of terrorism.

Ishiba quickly retracted his statement. But his vitriol outraged critics, who raised fears about the obfuscated and strangely targeted definition of “terrorism” in the bill. According to Article 12, terrorism is partially defined as an activity that forces “political and other principles or opinions on the state or other people.”

In other words, throw up a rowdy anti-government protest, and the judiciary can find a reason to lock you away.

Journalists can be prosecuted for “improperly accessing” classified documents or “conspiring” to leak them.

Even asking an official to take a look at classified documents could constitute “conspiracy,” leading to up to five years in prison. “Instigating” the release of government secrets, meanwhile, carries up to 10 years in the dock.

The government denies this, proclaiming that free speech will continue to be protected under the Constitution. It has also incorporated hazy safeguards, including a line in the bill that agencies must “take into consideration” human rights and freedom of the press.

But what exactly does that mean? Protestors aren’t reassured.

Basically, anything can be a secret

The problem is, administrators can make the opaque decisions to classify a document even if their work hardly relates to national security. That effectively allows them to hide any embarrassing piece of evidence, and then pursue the journalists and bloggers who make it public.

The act may conflict with the freedom of information law.

It’s unclear how the act will impact the 1999 freedom of information law, which grants citizens the right to request disclosures and lays out the government’s responsibilities in doing so.

In all likelihood, officials will probably use the state secrets bill to refuse requests, acting in line with the freedom of information law’s broad exemptions for releases that could harm national security or public order, writes Joel Rheuben, a Japanese law specialist.

Is democracy under threat in Japan? Prime Minister Shinzo Abe has agreed to set up an agency that would monitor the information that’s made secret. But that’s only a promise, not a provision actually included in the bill — the sort of vagueness that critics are going after in the first place.