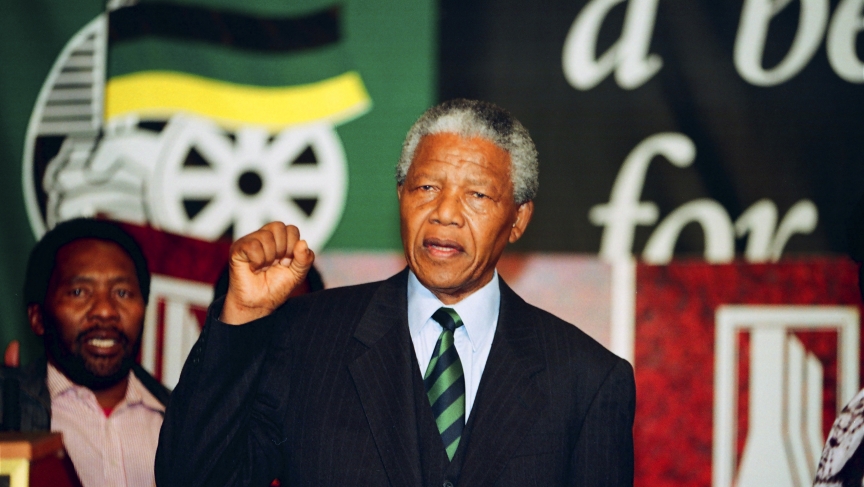 Nelson Mandela holds his fist in the air at the African National Congress (ANC) meeting following the announcement his party had won the first free South African Presidential elections in Johannesburg May 2, 1994.

Nelson Mandela was a man with many labels.

He was, of course, a great leader, an activist, a former president, a peacekeeper and an icon for today's generation. But less than ten years ago, he had a much different title, at least in some circles. Until 2008, Nelson Mandela was on the US terrorism watch list.

In the 1980s* both President Ronald Reagan and British Prime Minister Margaret Thatcher viewed Mandela in connection with his role in the African National Congress. The ANC participated in guerilla warfare in their fight against apartheid in South Africa. So Mandela was officially labeled a terrorist — a label that stuck for decades.

Andrea Dew, who has written about terrorism, militias and insurgency around the world in two books, says Mandela is an interesting example of a "terrorist." He was able to change the way history thought about him and change his legacy.

"He was involved in what most people would call guerilla actions, which is using explosives to blow up railway lines or police stations, but not what we would think of as mass terrorist attacks in the 21st century," said Dew, a professor at the US Naval War College in Newport, R.I. "His involvement right at the beginning was definitely violent, but it was something he wrote about in his jail cell when he says, 'I really regret that. That's not the way to go.'"

While our definition of terrorism has changed over the years, she described the designation process as a "heavy tool" in the hands of the US government. There are many criticisms of the label, particularly as it is applied to different organizations. In the case of smaller groups aimed at taking down a specific government, making the list acts as a form of certification, she said. A relatively unknown group can then say the most powerful government in the world views them as a threat.

In the case of Mandela, much of his terrorist identity came from his association with the African National Congress. The organization remained a militant group long after Mandela had chosen a different path. It was in 2008 that the US delisted the ANC.

"In the last ten years or so, there's been more of a willingness to look at the acts of individuals and [then decide whether to] put them on the watch list," Dew said, noting that policies are adapting to a new climate of international terrorism.

Another criticism of labeling groups as "terrorist organizations" is that it can halt the diplomatic process. Often, officials need special permission to have any interection with representatives of groups designated that way.

This was a challenge, for example, with the IRA and Sinn Fein. Dew said the IRA's history is full of militant violence, and the British government struggled with how to label Sinn Fein.  Sinn Fein has long been the political arm of various factions of the IRA — dating back to the Irish independence movement in 1916.

And it can take a long time for a label to be removed. Take the ANC, for example. It took nearly 30 years after apartheid ended in South Africa and the ANC became a political party before the US delisted it.

*UPDATE: A previous version of this story indicated that the terrorism watch list was created in the 1980s. This was just want Mandela was added to the overall roster of terrorists to watch by the US government. We regret the error.