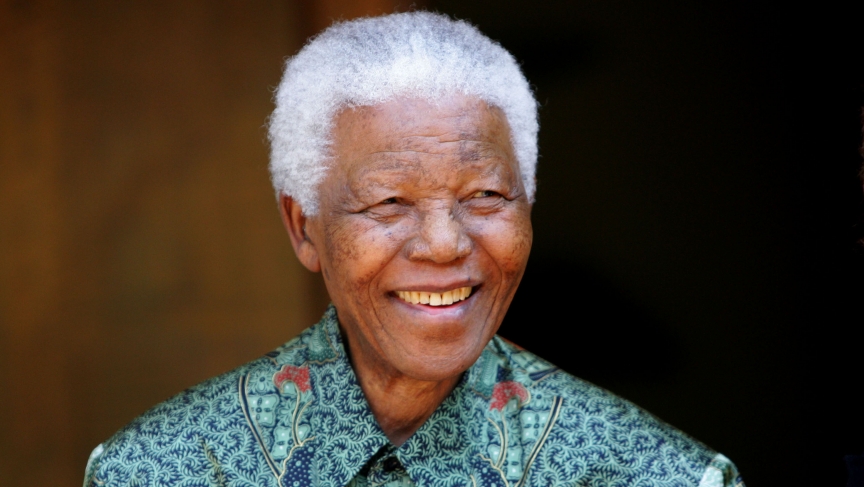 The news that many in South Africa — and around the globe — have been anticipating for months has now come to pass.

"We've lost our greatest son," he said. "May his soul rest in peace. God bless Africa."

The story of his life — of his fight for democracy in South Africa and rights for all, regardless of race — is legendary. For many people, Mandela's story is the story of South Africa.

Global acclaim seemed to follow Nelson Mandela wherever he went. Even so, he was humble. Here's what he wanted for his epitaph:

"I would like it to be said, here lies the man who has done his duty on Earth. That is all," he said.

Mandela will be remembered as a man who went beyond the call of duty. He showed his fellow countrymen that it was possible — perhaps even imperative — to forgive one's enemies. Mandela led by example, inspiring South Africa's political and racial rivals to work together to build a democracy. Mandela was such a powerful leader during apartheid that the white minority government considered him a threat to the state, even from prison.

Authorities banned the publication of Mandela's writings. They refused to allow the media to show Mandela's image. When he was finally released from prison, in February, 1990, most of the world had no idea what he'd look like. And that only added to the drama when he was released, which was clear in a live BBC broadcast on that day:

"And now, Mr Mandela walks through the gates. He's a free man, as of this moment. He's waving his fists in the air, he's smiling. He's a very alert, very imposing-looking figure, slightly greying hair, upright, a beaming Winnie Mandela alongside him."

From prison, Nelson Mandela went straight to Cape Town City Hall, where he addressed a crowd of about 50,000 people.

"Today, the majority of South Africans, black and white, recognized that apartheid has no future," Mandela declared.

Mandela had come from a long line of leaders. Born into a royal family in 1918, his grandfather had been a king of the Thembu people. His father was a chief. The young Mandela attended boarding schools. He went on to South Africa's only black university. He graduated in 1942 and became a lawyer. His biographer, the late Anthony Sampson, said that Mandela seemed more style than substance in his early career.

"At that time, he seemed to me to be a rather — a bit of a showman, really," Sampson said. "I hadn't realized quite the steel that lay below... beneath that, because he was a very romantic, handsome, impressive character, but he didn't, to me, appear to have that kind of political gravitas which he later showed."

Mandela joined the African National Congress two years after he graduated from college. At first, he espoused non-violent resistance to apartheid. But watching the white government's brutal suppression of protestors caused Mandela to change his position. He abandoned his non-violent stance after government troops killed 69 black protestors in Sharpeville in 1960.

"There are many people who feel that it is useless and futile for us to continue talking peace and non-violence against a government whose reply is only savage attacks on an unarmed and defenseless people," he said at the time.

Mandela helped found a military wing of the African National Congress. It was called Spear of the Nation. He was arrested in 1962 on charges of sabotage and treason. At the end of the trial, Mandela, facing a possible death penalty, spoke directly to the judge.

Mandela was sentenced to life in prison. But even in his cell, Mandela retained his dignity and his sense of humor. Attorney George Bizos remembers visiting the imprisoned Mandela.

"He was brought to the consulting-room with two warders in front, two warders on each side, and two at the back. And the thing about Mandela was that he didn't behave like a prisoner, ever," Bizos recalled. "He was setting the pace at which they were walking towards me. And quite deadpan, he said: 'George, allow me to introduce you to my guard of honor'. At least one of them actually smiled."

South African President P. W. Botha opened secret talks with Mandela in 1986. Botha offered to release Mandela if he renounced the use of violence. Mandela refused. He wrote a defiant letter explaining why he chose to stay in prison. His daughter Zinzi read Mandela's message to a cheering crowd at a Soweto stadium.

"My father says: 'I cannot and will not give any undertaking, at a time when I and you, the people, are not free. Your freedom and mine cannot be separated! I will return!'...." she said.

Mandela was already plotting his return. From prison, he'd begun talks with the government on forming a multi-racial democracy. In 1990, President FW De Klerk addressed South Africa's parliament with words the world had been waiting to hear for more than a quarter of a century:

"I wish to put it plainly: ... the government has taken a firm decision to release Mr. Mandela unconditionally," De Klerk said.

"Today is a day like no other before. Voting in our first free and fair election has begun. Today marks the dawn of our freedom," Mandela said.

Mandela was elected president. He was inaugurated on May 10, 1994. Mandela then outlined his vision for the future of South Africa.

"We enter into a covenant, that we shall build a society in which all South Africans, both black and white, will be able to walk tall without any fear in their hearts, assured of their inalienable right to human dignity: a rainbow nation, at peace with itself and the world," he said.

Mandela found it difficult during his presidency to tackle South Africa's many social ills. The majority of citizens continued to live in poverty and crime was rampant. Mandela himself would later acknowledge that he did not do enough as president to address the scourge of AIDS. His son would later die of complications from the virus.

Mandela stepped down in 1999 after his term ended. In retirement, Mandela occasionally used his celebrity status to help South Africa on the world stage. He was credited with helping to bring the 2010 Soccer World Cup to South Africa, the first time an African nation hosted the global event.

But in 2005, Mandela told a crowd in London of his proudest accomplishment: helping to end apartheid in South Africa.

"Never, never and never again shall it be that this beautiful land will again experience the oppression of one by another and suffer the indignity of being the skunk of the world. The sun shall never set on so glorious a human achievement. Let freedom reign, God Bless Africa," he said.