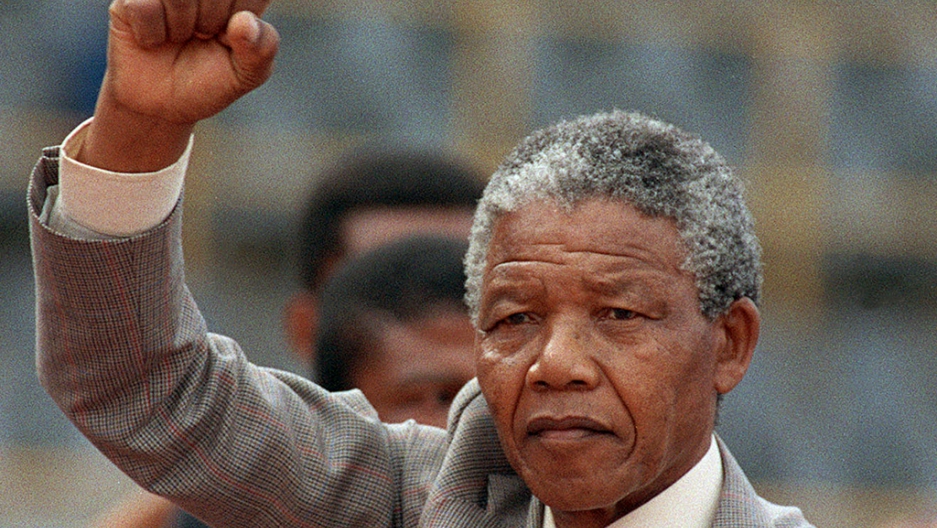 Anti-apartheid leader and former South African President Nelson Mandela has passed away at the age of 95.
Credit: TREVOR SAMSON
Share

JOHANNESBURG, South Africa — Nelson Rolihlahla Mandela, who spent 27 years in prison for his struggle against racist white rule before emerging to become South Africa's first democratically elected president, has died at the age of 95.

South African President Jacob Zuma announced Mandela's death to the nation in a televised statement live from the Union Buildings in Pretoria.

Mandela, who had become increasingly frail over the years and suffered recurring lung infections, passed away Thursday at 8:50 p.m. local time. He is said to have died peacefully and in the company of family at his home in the Houghton area of Johannesburg.

"Our nation has lost its greatest son," Zuma told South Africans. "Our people have lost a father."

Zuma said that Mandela will be given a state funeral, and that flags across South Africa will be lowered starting tomorrow.

"Although we knew that this day would come, nothing can diminish our sense of a profound and enduring loss," Zuma said in his address to South Africans. "His tireless struggle for freedom earned him the respect of the world."

“He achieved more than could be expected of any man,” Obama said.

Obama called Mandela “a man who took history in his hands and bent the arc of the moral universe toward justice.”

“We will not see the likes of Nelson Mandela again. It falls to us to carry forward the example he set.”

Mandela's political party, the African National Congress, said that South Africa "has lost a colossus, an epitome of humility, equality, justice, peace and the hope of millions, here and abroad."

"The large African Baobab, who loved Africa as much as he loved South Africa, has fallen. Its trunk and seeds will nourish the earth for decades to come," the ANC statement said.

Mandela, known in South Africa by his Xhosa clan name “Madiba,” had a history of lung problems dating back to his years working in a lime quarry as a political prisoner on Robben Island. He contracted tuberculosis during his 27 years behind bars.

After the collapse of the apartheid system, Mandela became South Africa's first black president in 1994, and served one term before retiring.

In recent years he spent much of his time in Qunu, his beloved boyhood village in the remote Eastern Cape, but hadn’t been back since being airlifted to Pretoria for medical treatment a year ago.

The Nobel Peace Prize winner had not appeared in public since South Africa hosted the soccer World Cup in 2010, when he toured the stadium in Soweto ahead of the final match, waving weakly to the crowd with wife Graca Machel by his side.

Zuma, in his address, spoke of Mandela's vision for South Africa, "in which none is exploited, oppressed or dispossessed by another."

South Africa must not rest until Mandela's vision of a "truly united," "peaceful and prosperous" Africa has been achieved.

[View the story "Nelson Mandela is dead" on Storify]