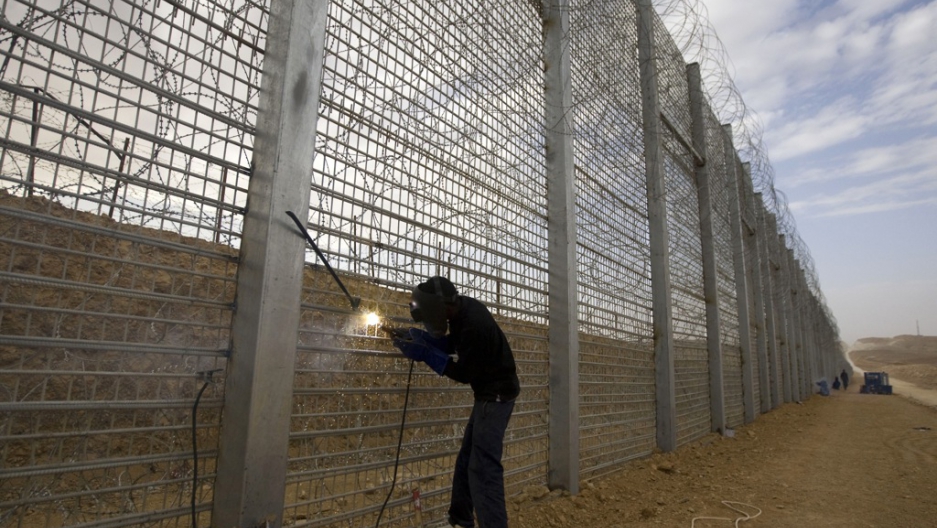 A laborer works at the construction site of the fence along Israel's border with Egypt near the Red Sea resort town of Eilat on Feb. 15, 2012. The barrier along the 150-mile border with the Egyptian Sinai was completed in late 2013.
Credit: AHMAD GHARABLI
Share

EILAT, Israel — It is not simple to get to the border between Israel and Egypt these days.

On Wednesday, the Israeli army completed the final part of a new fence marking the border between Israel's southernmost city and the Sinai's sands — but even for the committed wall-spotter, the outsized barrier is all but impossible to glimpse without a military escort.

This was not always the case.

Until two years ago, average Israelis longing for an airier break than that offered by the crowded resort town of Eilat flocked to the nearby border crossings to vacation on the peninsula's breathtaking beaches — while dodgy Israelis trolled the rarely-patrolled dunes forming the desert frontier, making drug deals. It was Israeli shekels, or US dollars, in exchange for any sellable substance.

On the other side of the border, African immigrants — mostly from Sudan, Eritrea and Ethiopia — trekked across the desert toward Israel’s glimmering economic opportunities.

You might say Eilat was Israel's San Diego, with Mazatlán and the illicit lures of Tijuana beckoning on one side, and impoverished masses dying — sometimes literally — to cross the other way.

That was then. Now, what the Israel Defense Forces (IDF) calls "Project Hourglass" has culminated in a very different panorama along the 165-mile border: a sturdy mesh fence, 15 feet tall, armed with sensors and cameras topped with barbed wire.

This fortified barrier was initially intended to keep out illegal migrants, but is now one of Israel's primary weapons against the growing threat of jihadi terror emanating from the Sinai desert.

The fence's effect already appears to have been vast: according to estimates released in July by the prime minister's office, a mere 34 people entered Israel illegally in the first half of 2013 — compared to nearly 10,000 people in the first six months of 2012, a decrease of more than 99 percent.

Egypt — struggling to maintain control over the Sinai desert and to keep crime, illegal migration and extremist Islam at bay — did not oppose the construction of the fence so long as it was built on Israeli soil.

"It is an Israeli affair," Hossam Zaki, as Egyptian foreign ministry spokesman, told Agence France-Presse in 2010.

More from GlobalPost: Terror in the Sinai

Then, in 2011, the almost unimaginable happened: after 30 years of semi-benign dictatorship, Egyptian president Hosni Mubarak, a strong ally of Israel who ruled Egypt's vast desert wasteland with an uncompromising spirit, was unseated in a popular coup.

Suddenly, the low-key problem of itinerant drug dealers and the politically intense problem of illegal immigration were transformed into an upper-case problem of jihadis occupying a lawless expanse contiguous to Israel's southern playground.

The real wakeup call came in the form of a terror attack that left 8 Israelis dead and 30 wounded.

In August 2011, a cell of over a dozen armed Gazans tunneled their way into the Sinai desert, then crossed into Israel at a spot marked only by a tattered, torn fence 9 miles from Eilat.

The well-coordinated, complex attack started with the shooting of a bus that was driving along the highway that came almost up to the border.

In a steadily increasing number of cases, the Israeli army began to find itself confronting what a senior military official in the Southern Command told GlobalPost are "piggy-back" events, in which a terrorist or terrorists infiltrate groups of immigrants.

So up went the barrier. Built at a cost of about $270 million, it is one of the few world borders visible from space — due to overgrazing on the Egyptian side of the border, which creates a sharply visible boundary.

The fence itself has no roadway leading to it, and no path alongside it. Black asphalt side routes snake among miles of sand dunes, leading from main highways to the well-guarded border. Elite soldiers now secure areas that were once guarded by relaxing reservists.

Even the windblown weeds are under observation.

"We deal daily with attempts to smuggle drugs — everything from hashish to bricks of heroin," the officer explained. "Terror organizations take advantage of the platforms provided by drug smuggling networks, and try to smuggle in terror."

He provided the example of Netanel Yahalomi, a soldier killed in September 2012 in a shootout at the site where the border fence was being constructed. According to the official, “terrorists” who had placed themselves within a group of detained African migrants opened fire on both Israeli soldiers and the migrants seeking work.

"We see growing attempts by global jihad elements to try to get to the fence, including rockets aimed at Eilat," the officer said. "There are attempts all the time, constantly, some of which are intercepted by Egyptian forces, and some of which we end up facing directly."

The chaos of intercepting attacks on the border, however, belies what the officer wryly called casual but "excellent cooperation between Israeli and Egyptian citizens" when it comes to the drug trade.

"We have to relate to these criminal elements as if terror were always riding their coattails," he said.

"The drug smugglers may have no intent to commit terror, but they may still be armed. They are escaping the Egyptian army on the other side. When we hear shooting, we have to assume it’s terror."