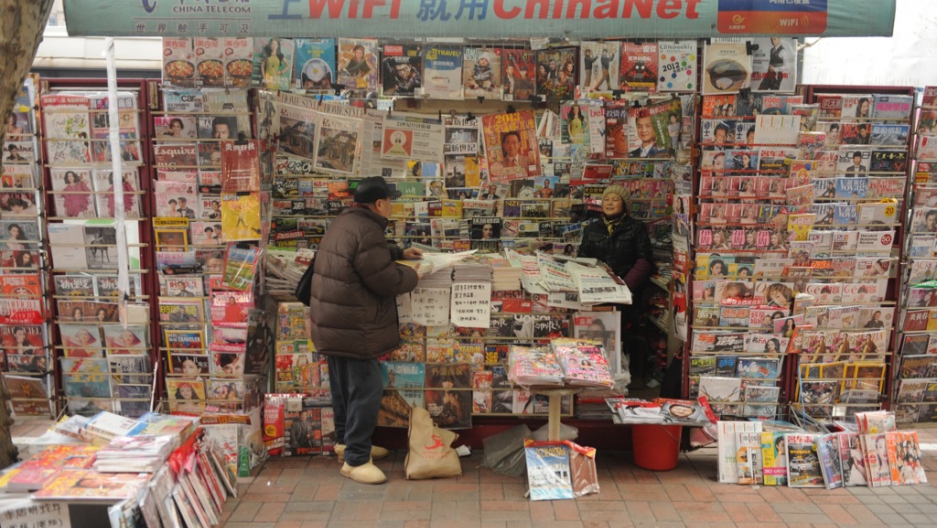 A newspaper vendor (R) talks to a customer at her booth on a street in Shanghai on Jan. 8, 2013. In December, China announced that it would expel dozens of foreign reporters from the country, in an unprecedented crackdown by authorities against foreign news organizations.
Credit: Peter Parks
Share

HONG KONG — The English-speaking world’s newspaper of record may be on the verge of getting kicked out of China, in an unprecedented crackdown by Communist Party authorities against foreign news organizations.

According to Ian Denis Johnson, a New York Times contributor in China, some 24 correspondents for the paper face ejection from the People’s Republic starting Dec. 17 — less than two weeks from today — unless Beijing stands down from its apparent clandestine intent to ban the New York Times and Bloomberg News reporters from operating in the country.

China is about to expel all NYT and Bloomberg correspondents from China--unprecedented. Biden raised issue with Xi. http://t.co/sfyfbdoZT4

The New York Times and Bloomberg irritated the Communist Party leadership by publishing, respectively, an in-depth reporting series on the alleged vast, $2.7 billion family wealth of the avuncular, “man of the people” ex-premier Wen Jiabao, and the alleged $376 million family fortune of the current chairman of the Communist Party — and self-declared foe of official corruption, Xi Jinping.

The New York Times won the Pulitzer Prize in 2013 for its “striking exposure of corruption at high levels of the Chinese government, including billions in secret wealth owned by relatives of the prime minister, well documented work published in the face of heavy pressure from the Chinese officials.”

Reporters at Bloomberg and the Times have been “mysteriously” stymied in their attempts to get visas to operate since these blockbuster reports were published. At least 24 journalists now face unceremonious expulsion from China, according to the New York Times, due to the recalcitrance and anger of Beijing over these reports.

The New York Times reported today that Biden raised the issue of visas for Times and Bloomberg journalists with Chinese president Xi Jinping. It’s unknown what effect, if any, his appeal obtained.

The paper added, “The government’s actions, which appear aimed at the news organizations rather than at individual reporters, threaten to shut down the China news bureaus of The Times and Bloomberg, as well as hobble their business operations in the country.”